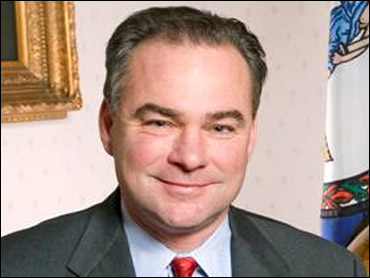 Political Players is a weekly conversation with the leaders, consultants, and activists who are shaping American politics. This week, CBS News' Brian Goldsmith talked with Gov. Tim Kaine of Virginia, a leading Barack Obama supporter, about religion and politics, guns and the NRA, and whether a Democrat can break the GOP's lock on his state's electoral votes.

CBSNews.com: You've endorsed Senator Obama for president. Many of his supporters seem concerned about his trouble thus far turning all the money and momentum into stronger poll numbers. Do you wonder at all why that hasn't happened yet?

Tim Kaine: Well, I think that the senator got in feeling like he was an underdog, and he has the underdog mentality, which means he is working real hard. Look, do not take anything away from Senator Clinton. She is the frontrunner and a very formidable candidate. But I continue to believe in Senator Obama, and feel like his prospects are really good organizationally in the early states.

This is a very challenging race against a frontrunner. But I think he has got the right attitude about it, and just needs to keep chipping away.

CBSNews.com: If I were an undecided Democratic voter, why should I support Senator Obama over Senator Clinton?

Tim Kaine: I think that the case that Senator Obama makes to undecided voters is if you want a fresh start after eight very troubling years in Washington, put a guy in who has experience as both a state legislator and now at the national level.

That is, experience of bringing people together, being a true uniter rather than a divisive figure, being somebody who is known for ability to work in bipartisan ways, and who really represents in every facet of what he has done a kind of excellence that all Americans can be proud of.

CBSNews.com: You received a very impressive mandate in 2005 in Virginia. A lot of people did not expect you to win that campaign, what lessons do you think Senator Obama could draw from your campaign that would be applicable to helping him do better?

Tim Kaine: Well, I think in some ways the senator has drawn the lessons already. I mean, I do not know if he has drawn them from me. I would flatter myself to say that. But here is what he knows. He knows that you have got to reach out not just to hard-core Democrats, but you need to reach out to the huge number of Americans that are independents, and recognize that there are a lot of moderate Republicans who will cast a vote for a Democrat who is willing to work across Party lines to make things happen.

And I see Senator Obama doing that in some interesting ways. He is running ads in Iowa right now to the Democratic caucus electorate where he talks about bipartisanship--and where Republican legislators he had worked with in Illinois praise his ability to find common ground.

CBSNews.com: Do you think there are any lessons that could be drawn from your experience governing in Virginia that would be a useful template for the next Democratic president?

Tim Kaine: I think it has got to be a heavy focus on results. I think what people tire about in Washington are endless debates about issues that never get resolved. I think the failure of Congress to reach a resolution on immigration this summer was a perfect example.

You have got all kinds of states doing all kinds of different things on climate change policy, including Virginia. The best strategy is an aggressive national strategy. But waiting around has led so many of us states to feel like we can't wait.

I think the senator's track record as a state legislator, and his short time in Washington demonstrates that he can carry that message very strongly.

CBSNews.com: And yet, Republicans have had this 40 year lock on Virginia's electoral votes. The last Democrat who carried the state, as you know, was Lyndon Johnson in 1964. Why do you think Democrats have been unable to break through, even Democrats like Jimmy Carter and Bill Clinton, who did very well nationally?

Tim Kaine: Well, even in those years in the '60s and '70s we were electing a lot of Democratic governors, but frankly the state Democratic Party and the national Democratic Party were at odds. They were very different in their message and in their orientation.

I think what I see at the national level now is a national Democratic Party that takes fiscal responsibility seriously. That takes results-oriented, performance-driven government seriously. And I think as the national party embraces candidates who talk that language and actually act on it, I think Virginia's votes are very, very much in play.

I think that with Mark Warner running for Senate in Virginia next year, I think it is going to be a very positive year in terms of being able to make this thing competitive. And I think that there is a good chance we are going to get the electoral votes of Virginia into the blue column.

CBSNews.com: And do you rule out joining an Obama-led ticket as a candidate for vice president?

Tim Kaine: Yes. I signed up for a great gig, which I never expected to have, which is the opportunity to be Governor of Virginia. And that does not finish until January of 2010. And so in Virginia, as you know, it is the only state where you just get one term. You cannot run for reelection.

And those four years need to be just crammed full, wall to wall with efforts to move the state forward. And so I am not going to do anything that would shorten that four year wonderful opportunity I've been given.

CBSNews.com: The tragedy at Virginia Tech brought the issue of gun safety laws into the forefront. What kind of progress has Virginia made on that since then? And is it tough for Democrats to get around the NRA attacks that somehow your party wants to take people's guns away?

Tim Kaine: Well, the Virginia Tech panel did look carefully at these issues with respect to firearms. We made one immediate change in closing a loophole in the Virginia law concerning entry of mental health adjudications into the national gun database. Virginia has been the leader nationally in putting that information in the database.

But under the narrow circumstance in this case, the data did not go into the database, and that had tragic consequences. I have fixed that by executive order.

The panel also raised the issue of the gun show loophole in Virginia. More broadly should background checks need to take place at gun shows or significant private sales. My belief on that, and I'm been on record on this for a long time is if we have a law that says somebody who is mentally ill or a felon should not get a gun, we should not let them get a gun at a gun show.

CBSNews.com: Finally, you ran a very interesting campaign in 2005, one that many people nationally watched. And one of the things you emphasized, of course, is your faith. Do you think that it is necessary for a national Democratic candidate to emphasize his or her own faith as that candidate runs nationally?

Tim Kaine: I would say it slightly differently. I think any candidate, and I think Democrats have been a little weaker at this than they should be, any candidate should emphasize front and center why they are doing this. You know, why are you running?

And it tends not to be just a dry recitation of policy positions. Most of us in this line of work have a significant motivator. For me, it was an experience that I had a young man in Honduras working with missionaries that really transformed the goals of how I wanted to use my life. And so for me, I can't answer the question of why I run without talking about my spiritual journey. That is not everybody's motivation. But I think, you know, you need to share what your motivation is.

Another great example of a candidacy to prove that point is Jim Webb's race last year. You know, his motivation was not that he was a missionary as a young man. But he shared what his motivation was. He was a soldier who wanted to make sure that American leadership was up to the standards of the men and women in the armed services, including his son, Jimmy, who was overseas as a Marine in Iraq.

And that was his motivation. And he shared that story. And then that had a way of making people understand why he felt the way he did about some of the most important policy issues. So, again, whether it's a faith journey, whether it's a personal experience you had, I think what voters want to know is, are you just in this to put something on your resume, or to build the stepping stones of some other office?

Or are you in this because of a deep commitment that you have from your inside, from your soul? And, if so, we want to know what that commitment is.

Tim Kaine has served as Virginia's Governor since January 2006. Born in Kansas City, Missouri, Kaine took a year off from Harvard Law School to serve as a missionary and school principal in Honduras. He served as Richmond's mayor and as Governor Mark Warner's lieutenant governor. As governor he's focused on schools, health care, economic growth, and the environment. Kaine's wife, Anne Holton, is the daughter of former Republican Virginia Governor Linwood Holton, making her the only Virginian to have lived in the Governor's Mansion as both a child and an adult.