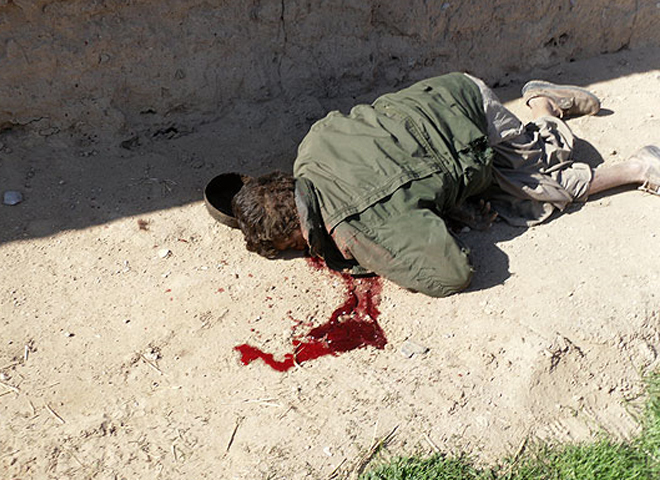 A special report published online and appearing in this week's issue of Rolling Stone - including extremely graphic photos and videos never before released - examines a group of U.S. Army soldiers who participated in the slayings of innocent Afghan civilians, and those who condoned, ignored or blew the whistle on their actions.

The Pentagon has sought to characterize the actions of members of the 3rd Platoon, Bravo Company who participated in atrocities as those of a "rogue unit" operating outside of their superiors' knowledge. Last week, a U.S. soldier pleaded guilty in the murders of three unarmed Afghan civilians, and of having participated in a conspiracy among several platoon members to execute innocents and then fake the crime scenes to appear that they were insurgents. Spc. Jeremy Morlock, 22, was court-martialed and sentenced for up to 24 years in prison.

Morlock's sentence was reduced in exchange for his testimony against other members of the "kill team" implicated in the executions that occurred in Kandahar province in January, February and May 2010.

No officers have been charged in the killings.

In "The Kill Team," Rolling Stone's Mark Boal writes that a review of internal Army records and investigative files, including military investigators' interviews with members of Bravo Company, indicates that a dozen infantrymen were operating openly, their clearly illegal actions common knowledge by "pretty much the whole platoon," according to one soldier who complained of them.

What is revealed in the article - and in the previously unreleased (and extremely graphic) pictures and video posted of the Kill Team's victims - is a culture of barbaric violence fueled by rage, boredom, revenge, drugs, and an unwavering antipathy to all Afghan civilians, even those with no obvious connection or loyalty to the Taliban.

Frustrated after months of failing to encounter Taliban militants, and after several fellow service members were killed or wounded by IEDs, several soldiers openly discussed taking out their aggression by killing a local, and plotted how to take advantage of an opportune moment.

The first such moment came on January 15, 2010 in the village of La Mohammad Kalay, when Morlock and Pfc. Andrew Holmes saw a young farmer alone in a field. Morlock said later he was not a threat, but the young, unarmed man - a boy, really, younger than any of the troops - was shot, a grenade planted near his collapsed figure.

The top officer on the scene, Capt. Patrick Mitchell, suspected Morlock's story about a potential ambush was "weird," but instead of rendering aid to the boy, Mitchell ordered Staff Sgt. Kris Sprague to "make sure" the victim was dead. Sprague did, with two bullets.

After the body was identified, the soldiers took photographs of themselves with their kill, and sliced off a finger as a trophy.

The killing prompted no investigation, discipline or punishment, and so the soldiers continued what became a four-month spree of targeting, attacking, killing and mutilating the bodies of Afghans. They also amassed contraband munitions (like Russian grenades and assault rifles) to plant at the death scenes as "evidence" of the victims' ties to militants.

As photographs and video of the dead were circulated to fellow soldiers, friends and family back home - one video, titled "Death Zone," was produced with a pulsing rock soundtrack showing Afghans being picked off to cheers - officers higher up did little or nothing to investigate. Soldiers who spoke up about the assaults on innocents backed off after receiving beatings and threats that they could face a similar fate to the previous possessors of severed fingers.

One whistle-blower, Pfc. Justin Stoner, told the Army Criminal Investigation Command, "They have had a lot of practice staging killings and getting away with it."

After one soldier complained to his dad in a Facebook message that the group was planning another murder, the father contacted the command center at Joint Base Lewis-McChord, but was told by a sergeant on duty, "Stuff like that happens." The soldier then begged his father to remain quiet, fearing for his own life.

The Pentagon demonstrated a different fear - fear that the pictures and video, if released to the public, could create a scandal not unlike that generated by the infamous Abu Ghraib prison pictures depicting U.S. troops mistreating Iraqi detainees.

Boal writes that the military sought to collect and suppress the photos by confiscating computers and hard drives, even visiting soldiers' relatives back home. Afghan President Hamid Karzai was briefed about the pictures last May, as was Gen. Stanley McChrystal.

Five other members of Bravo Company have been convicted of other crimes, including drug use, beating up a perceived snitch, and stabbing a corpse. Two others face related charges.

Four other infantrymen facing murder charges maintain their innocence. Some have agreed to testify against 26-year-old Staff Sgt. Calvin Gibbs, the platoon's squad leader, who is alleged to have come up with the plan to target and kill civilians.

So far, Boal writes, no officers or senior officials have been charged in either the murders or their cover-up, and the Pentagon refuses to say whether any officers have been disciplined. The findings of a separate investigation by the Army into officer accountability, which concluded last month, have been kept secret.

Last week the German publication Der Spiegel published three of the images. In a statement issued March 21, the U.S. Army apologized for the suffering caused by the photos. The actions depicted, it said, are "repugnant to us as human beings and contrary to the standards and values of the United States. ...

"The actions portrayed in these photographs remain under investigation and are now the subject of ongoing U.S. court-martial proceedings, in which the accused are presumed innocent unless and until proven guilty," the statement continued. "These court-martial proceedings speak for themselves. The photos appear in stark contrast to the discipline, professionalism and respect that have characterized our soldiers' performance during nearly 10 years of sustained operations. It would be improper to comment further on these photographs at this time. ..."

Rollings Stone collected 150 images that had been passed around as war mementos, and it is possible some of the pictures - such as that of a severed head - are unrelated to U.S. service members' actions. But the magazine writes that a photo of the bodies of two Afghan men, tied back-to-back and placed along a roadside, suggest that the killings of civilians went beyond a "rogue unit" in the 3rd Platoon. Sources told the magazine that those men were killed by soldiers from a different platoon, so far not implicated in the scandal.

To read the complete Rolling Stone story, "The Kill Team," and to view the video and photographs, click here.