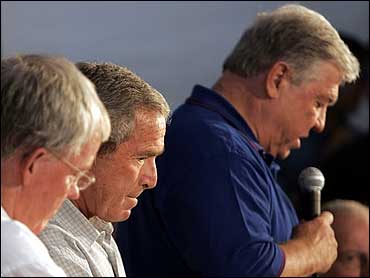 New Orleans Mayor Ray Nagin and Louisiana Gov. Kathleen Blanco strongly urged people along the Louisiana coast to be prepared to get out, and the federal government's top official in the city, Coast Guard Vice Adm. Thad Allen, said the preparations in and around New Orleans included 500 buses for evacuation, and enough water and military meals for 500,000 people.

With Hurricane Rita swirling in the Gulf of Mexico, Nagin said evacuation orders will be announced "based upon the storm's threat."

"We are praying that the hurricane dissipates or that it weakens," Blanco said. "This state can barely stand what happened to it."

Nagin ordered residents who had slipped back into still-closed parts of the city to leave immediately. He also urged everyone already settled back into Algiers, the only neighborhood now open to returning residents, to be ready to evacuate as early as Wednesday.

Engineers are working around the clock to patch up the levees before Hurricane Rita arrives and there are thousands of residents left in New Orleans trying to decide if they should stay or go, CBS News Correspondent Sharyn Alfonsi reports.

In anticipation of another hurricane, the Corps drove a massive metal barrier across the 17th Street Canal bed to prevent a storm surge from Lake Pontchartrain from swamping New Orleans again. Although engineers have left a large opening in the wall to allow floodwater to continue to be pumped back into the lake, it will have to be closed quickly if Rita or another storm threatens.

The recent call to return, then the sudden warnings to evacuate have left New Orleanians confused, Alfonsi adds.

Earlier, President Bush toured the region, and said of Hurricane Rita "what we pray is not a devastating storm" as he flew over miles of flattened homes and mud-caked neighborhoods hit by Hurricane Katrina.

Mr. Bush received a briefing about Rita aboard the USS Iwo Jima, which is docked near downtown New Orleans, as the hurricane lashed the Florida Keys and caused new anxiety among Katrina victims in Mississippi, Louisiana and Alabama.

Nagin told The Early Show's Hannah Storm that despite other federal criticism of the city's lack of complete infrastructure, bracing for Rita motivated him to call for a re-evacuation.

"You know, from my perspective, pressure is dealing with a city that's under sea level and that's facing its second hurricane in three weeks," Nagin said. "So ... the issue is Rita."

also told Storm (video interview)
that he did not think it would be necessary to enforce the renewed evacuation order.

Nagin said two busloads of evacuees left from a staging area at the convention center Tuesday afternoon. He estimated that 400 to 500 residents were left in the city. The city decided to allow people to continue cleanup until dusk Tuesday and will start to re-enforce the evacuation order Wednesday, he said. He did not give specifics on how the order will be enforced.

The officials said Rita was projected to strengthen to a Category 3 hurricane that would hit the upper to middle part of the Texas coast by the weekend and could create tropical storm conditions or, much less likely, hurricane-force winds in southeastern Louisiana.

"We're watching very closely, of course, its track," Mr. Bush said later at a Folgers coffee plant in Louisiana that recently restarted operations. "All up and down the coastline people are now preparing for what is anticipated to be yet another significant storm."

Eager to show hands-on leadership after being criticized for a slow response to Katrina, Mr. Bush signed an emergency declaration for Florida, spoke with Texas Gov. Rick Perry about planning for the storm's landfall, and said military outfits are being removed from New Orleans to be out of Rita's path and ready to help with recovery.

The White House said Mr. Bush had named Frances Fragos Townsend, his in-house homeland security adviser, to lead an administration investigation of "what went wrong and what went right" in the sluggish federal response to Katrina. The appointment of Townsend, a former federal prosecutor with a reputation as a tough adversary, is unlikely to satisfy Democrats on Capitol Hill who are demanding a fully independent investigation.

Mr. Bush said he was pleased that New Orleans Mayor Ray Nagin suspended his plan to allow as many as a third of the city's residents to return. He said positive steps are being taken.

"What you're beginning to see is a revitalized economy," Mr. Bush said, standing before 110 trailers set up for Folgers employees who lost their homes. "Progress is being made."

Mr. Bush began the day in Gulfport, Miss., where he dropped in on the first meeting of Gov. Haley Barbour's Commission on Recovery, Rebuilding and Renewal, applauding their "can-do spirit" and pledging to help clean up the devastated Gulf Coast. He flew along the coast over mile after mile of destroyed homes.

"There is no doubt in my mind that out of the rubble and out of the huge heaps of timber that used to be homes, a better Mississippi will emerge," Mr. Bush told the local government and business leaders gathered in an air-conditioned tent set up in a hurricane-damaged outlet shopping center.

The president told them he had heard their complaints about bureaucratic hurdles for trash removal, saying he was personally making calls to cut through red tape and people in the area will soon see results.

"There was a level of frustration, as there should have been," he said. "We'll get the debris removed."

"I'm confident that we'll get the resources because y'all have been so generous and good to us. But we want you to know that we're going to try to help you know what to give us," Barbour said to laughter.

Jim Barksdale, chairman of Barbour's commission, told the president and other attendees that they only have themselves to blame if reconstruction isn't successful. "You folks are like the pig at a ham and egg breakfast," he said. "You are committed."

White House press secretary Scott McClellan acknowledged that some of Mississippi's more rural areas still are waiting for federal help that has been focused in New Orleans and other larger population centers.

Mr. Bush planned to return South Friday and Saturday to visit Alabama, Texas and Arkansas — neighboring states that have taken in large numbers of Katrina evacuees.

As Air Force One landed again on the Gulf Coast, Americans were watching. As CBS News correspondent Gloria Borger

reports (video)
, new polls coming out today show the president's poll numbers just dipping as low as they've been thus far in his time in the presidency. On The Early Show, Borger said the most important thing to this president has always been his leadership rating.
View CBS News In
CBS News App Open
Chrome Safari Continue
Be the first to know
Get browser notifications for breaking news, live events, and exclusive reporting.