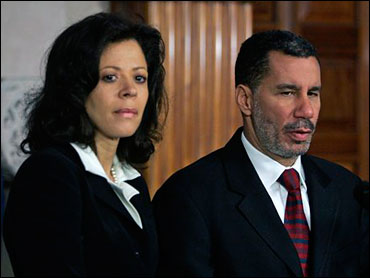 New York's new governor revealed Tuesday that he had affairs with several women, including a state employee. The confession came a day after he took over from former Gov. Eliot Spitzer, who was driven from office amid a prostitution scandal.

Gov. David Paterson said the affairs happened during a rough patch in his marriage, and that the employee did not work for him. He insisted he did not advance her career, and that no campaign or state money was spent on the affairs.

"I do not feel I have broken my commitment to the people of New York state," Paterson said at a news conference with his wife, Michelle Paige Paterson.

Paterson, 53, admitted an affair in an interview with the Daily News on Monday after he was sworn in, but his comments Tuesday indicate the couple's fidelity problems went deeper than he first acknowledged. He is not having an affair now, he said.

The Patersons said they both had affairs during a time when their marriage was headed toward divorce. But they admitted the infidelity, sought counseling and have built a stronger marriage and family.

"We dealt with it as a family," his wife said. "A marriage has peaks and valleys ... no marriage is perfect."

"I think we have a marriage like many Americans, maybe even like many of you," the governor told reporters. "Elected officials are really just reflections of the people we represent."

"I didn't want to be blackmailed," he said.

Paterson, who is legally blind and the state's first black governor, ascended to office after Spitzer's resignation last week amid allegations the former governor hired a high-priced prostitute from an escort service. It was a dramatic fall for Spitzer, who was elected with an overwhelming share of the vote and who had vowed to root out corruption at the Capitol.

"This transition today is a historic message to the world: That we live by the same values that we profess, and we are a government of laws, not individuals," Paterson said during his swearing-in.

Paterson took the oath of office from Chief Judge Judith Kaye, who ascended to the pinnacle of the state's highest court in 1993 after former Chief Judge Sol Wachtler was caught threatening and harassing an ex-lover.

Paterson, who becomes New York's 55th governor, has said he will get right to work. The Legislature faces an April 1 deadline to pass an estimated $124 billion budget, and Paterson also said that health care, education, jobs and problems facing "the single mother with two jobs" need immediate attention.

Paterson spoke for 26 minutes - about half of it engaged in the banter and humor that helped define him as a lawmaker and lieutenant governor - without notes or teleprompter.

He joked about his limited vision; he can see things close to him out of one eye.

There are an estimated 10 million visually impaired people in the U.S., and 1.3 million are legally blind, reports CBS News correspondent Byron Pitts. Despite high levels of training and education, their unemployment rate is a staggering 70 percent.

Before reluctantly accepting Spitzer's offer to run with him as lieutenant governor, Paterson was a Democratic state senator for more than two decades, representing parts of Harlem and Manhattan's Upper West Side.

His wife had tears in her eyes for most of Monday's ceremony.

"Every time I hear David speak, I want to cry," she said afterward. "I'm just very happy I was able to live to see this day."