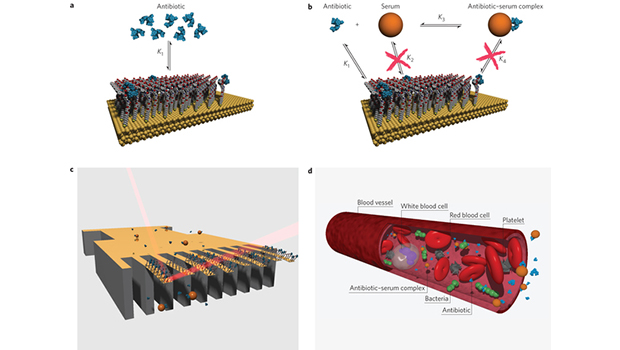 Doctors may soon be able to develop personalized treatment plans to fight superbug infections, according to new research. The key is in a tiny chip that measures the level of antibiotic molecules in the blood and determines how they work against bacteria.

The nanochips were developed by an international team of researchers hailing from Australia, Kenya and the UK.
"Some of our most effective antibiotics are like termites eating away at the walls of a wooden house - they attack bacterial cell walls so they eventually collapse," Matt Cooper, of the University of Queensland's Institute for Molecular Bioscience, said in a press release.

"But competing molecules in the blood can bind to antibiotics and prevent them from working, meaning there are less molecules free to exert force on bacterial cell walls. The sensor we developed, one billionth of a meter in size, can detect the bending that occurs in a cell wall when it is assaulted by antibiotics. This enables us to measure how many antibiotic molecules are free in the blood to attack bacteria and treat the infection based upon how much force they exert onto the wall."

Because every individual has a different number of free antibiotics in the blood stream, the new method will allow researchers to create individualized plans of attack against these superbugs, like MRSA.
"Understanding the way antibiotics use physical force against bacteria could also provide researchers with a new angle on the design of better drugs to fight superbugs, which often have thicker, stronger cell walls," said Cooper.
In the past decade, there have been MRSA outbreaks in high schools, among NFL teams and many hospitals, leading the Centers for Disease Control and Prevention to urge all medical professionals to wear gloves and gowns when they are working with infected patients. They've also turned to robotic cleaning devices to increase worker safety.
There are strands of MRSA that carry a mortality rate of 30-40 percent, Dr. Robert Moellering told CBS News in 2013. He has been studying superbugs for more than 40 years.
"MRSA is not resistant to absolutely everything, yet," Moellering said at the time. "The reason it's a big problem is because the organisms are easily spread from person to person. . . . And it can cause such a wide variety of infections. It can literally infect every tissue of the body except the fingernails and the teeth."
But with increased treatment options, there is hope. The most recent study article is published in the journal Nature Nanotechnology.