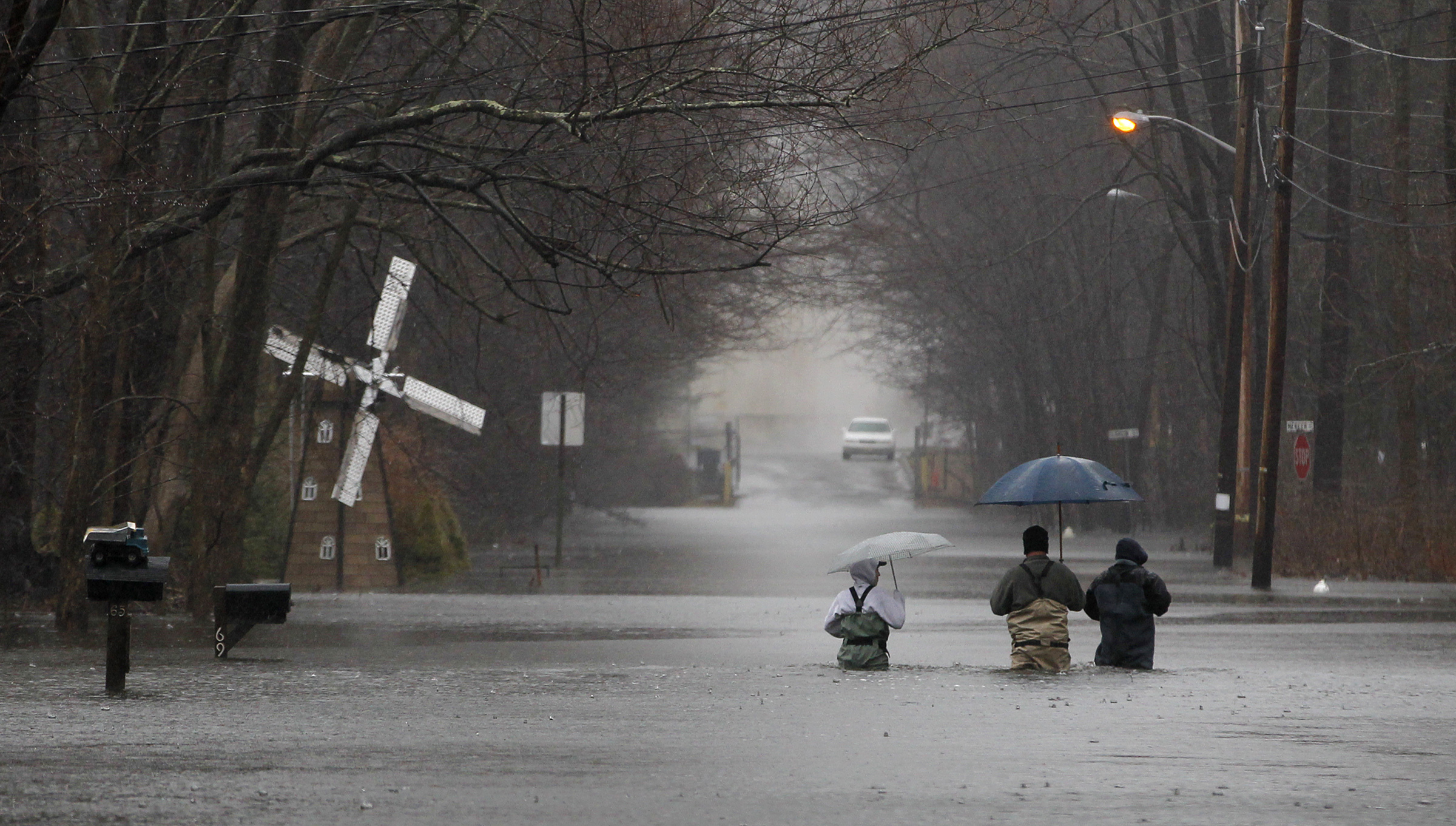 In Pompton Lakes, N.J., a pelting rain fell on Liri Zekirovski and a friend as they removed water-damaged furniture and flooring from Zekirovski's father-in-law's house next to the Pompton River.

It was the second time the area had been waterlogged in less than a week. In a small playground across the street, remnants of Sunday night's flooding could be seen in a bicycle rack that was nearly covered in mud.

"It's getting ridiculous. It's like every time it rains this is going to happen," Zekirovski said as he pointed to a water line on the front of the house about 2½ feet high. "It seems like we're putting in a new kitchen every six months. It might be better just to eat outside."

Flood watches were in effect across much of New Jersey, Pennsylvania, Ohio and New York.

The National Weather Service issued a flood warning for the Delaware River from north of Philadelphia through southern New Jersey, where moderate coastal flooding was predicted. The weather service said minor flooding was also likely Friday on the Schuylkill River and the Brandywine Creek in Chadds Ford, Pa., and the local school district canceled classes.

The Mid-Atlantic was also gearing up for rain-related problems. More than 2 inches of rain in parts of western Maryland pushed streams over their banks and prompted road closures, while a mudslide closed one lane of a heavily traveled commuter road in Washington on Thursday morning.

In Cincinnati, the rising Ohio River forced employees at Coney Island Amusement Park to move equipment such as ride motors and controllers to higher, dryer ground. The flooding closed roads, a public school, the River Downs horse racing track and waterfront restaurants across the state line in northern Kentucky.

The National Weather Service said the Ohio River was expected to crest at more than 4 feet above flood stage this weekend.

CBS News correspondent Elaine Quijano reports the governors of New Jersey and Maryland declared states of emergency on Wednesday. On Thursday, officials alerted about 100 New Jersey Army and Air National Guard troops that they may be placed on active duty to respond to any flooding.

Rainfall amounts of 3 inches or more were forecast for portions of northern New Jersey. The National Weather Service predicted major flooding this weekend along the Pompton River at Pompton Plains and along the Passaic River at Little Falls and Pine Brook.

Firefighters needed boats to reach a house fire on a flooded street in northern New Jersey. No one was in the Lincoln Park home when the fire broke out Thursday and no injuries were reported, but the home was badly damaged, the Daily Record of Parsippany reported.

Mike DeFrancisi, Mayor of Little Falls, N.J., tells CBS News, "The law now allows us to order mandatory evacuations which is not something we're really fond of or that we want to do but at the same time we don't want to put any of our responders in harm's way."

Major flooding also is forecast along the Susquehanna River near Binghamton, N.Y., where the water is expected to crest about 5 feet over flood stage on Saturday.

About 30 miles away in Waverly, Karla Koehn was moving her living room furniture into the kitchen, where she hoped to keep it dry by setting it atop cinder blocks.

"It's the only thing you can do unless you want to completely empty your home, which I don't really have the time or the energy to do," said Koehn, 49, a home health care aide and medical transcriptionist.

Koehn endured a major flood during 2006 in which water filled the basement nearly up to her floorboards and made her oil tank float. Now her oil tank is anchored with concrete. This time, she fears water will come in the first floor.

"You have to worry a little bit because you never know what can happen," she said. "Water is pretty powerful."

Two to 4 inches of rain was expected in Philadelphia through Friday, with similar amounts forecast for New York's Lower Hudson Valley.

At a conference in Philadelphia on Thursday addressing the quality of drinking water from the Delaware River, Environmental Protection Agency regional director Shawn Garvin spoke of his fondness for the waterway he knows so well.

"I'll be even more familiar with it when I'm vacuuming it out of my basement tonight," joked Garvin, who lives in Wilmington, Del.

Moderate flooding was expected in central Pennsylvania, including along the Swatara Creek near Hershey, where the state wrestling tournament was being held at the Giant Center.

Parking attendants Dean Behrendt and Cord Clark, both 18 and from Palmyra, were dressed in bright yellow rain slickers, shoulders hunched at times under a steady downpour.

"It's cold. It's real windy out, sometimes it makes it unbearable," Behrendt said. "I just try to layer up and get through it."

In Ohio, heavy rains over the past week-and-a-half have swelled rivers and streams. On Tuesday, the Scioto River in southern Ohio toppled a home that had been under construction in Piketon for the past 10 years.

Video shot by John Sparks' daughter shows his unfinished dream house floating down the river. Sparks told WSYX-TV that he plans to rebuild.

In northeastern Pennsylvania, the Susquehanna River is forecast to crest at 9 feet above flood stage in Wilkes-Barre by Saturday morning. The city is protected by a levee system, but nearby communities including Plymouth Township, Shickshinny, Plains Township and West Pittston are vulnerable.

The storm also was expected to bring snow to some spots.

Wet snow was expected to begin falling on northeast Ohio late Thursday. Up to a foot could accumulate through Friday, with the heaviest expected from the Akron area east to Youngstown and the Pennsylvania line.

A winter storm warning was in effect through Friday evening for the Pittsburgh area, which could see up to 8 inches of snow by Saturday morning. In the Adirondacks in New York, forecasts called for several inches.

Just a few days ago, a wild mix of snow, sleet and rain battered a wide swath of New England and upstate New York, dumping nearly 30 inches of snow on some areas, knocking out power to tens of thousands of utility customers, washing away homes and leaving many rivers and streams at high levels.