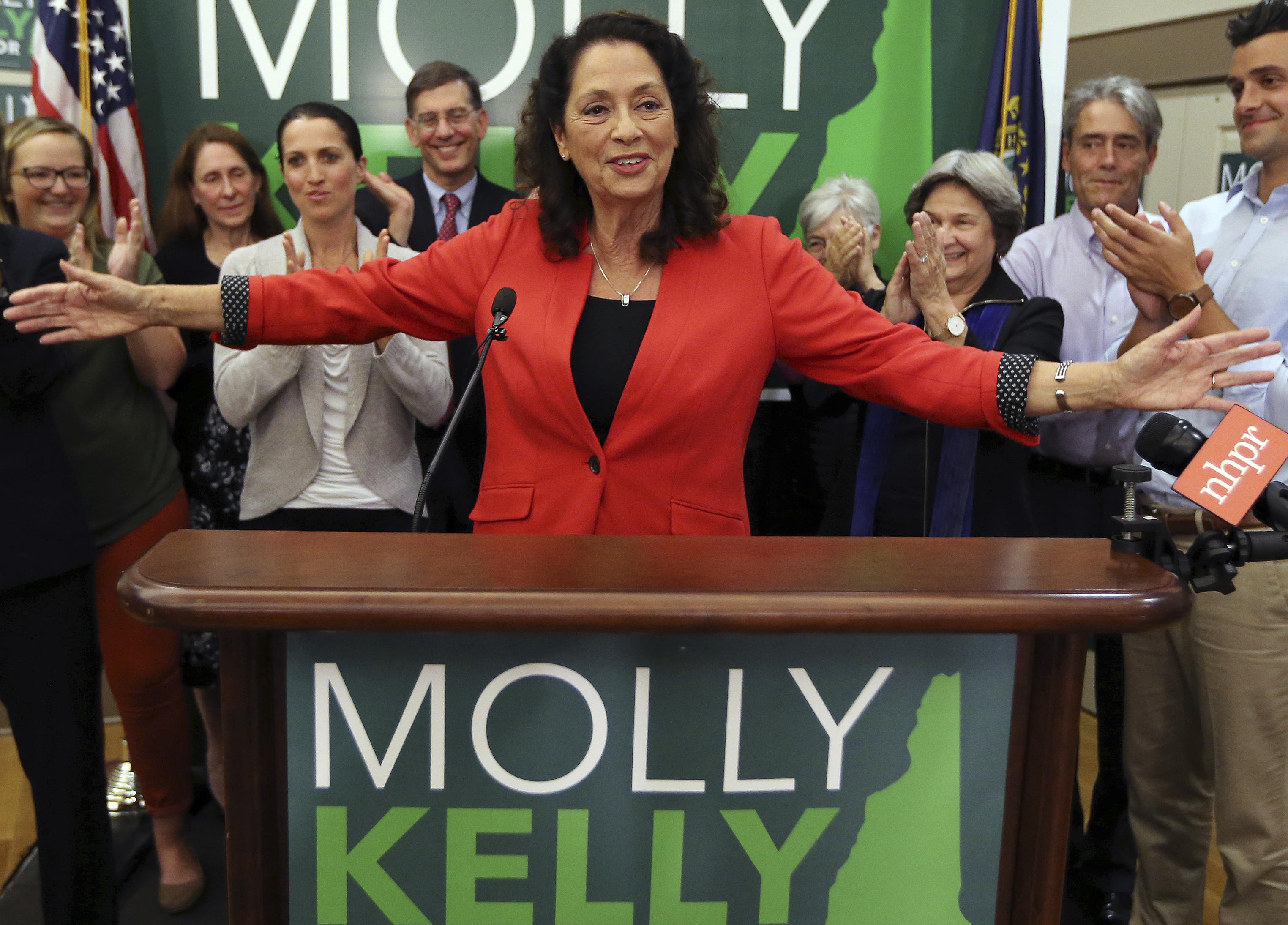 CONCORD, N.H. -- New Hampshire Democrats on Tuesday nominated a former state senator who emphasized her single-mom background as governor and a gay man who worked his way up through local politics as their nominee for Congress in a key swing district.

Kelly said strong Democratic turnout should send a message to Sununu that voters want someone who will put the people first, not corporate special interests. A five-term senator from Harrisville, she frequently emphasized her experience as a single mother who raised three children while putting herself through college.

"The people of New Hampshire know that I will fight for them every single day because I understand their struggles," she said in a statement Tuesday night. "Chris Sununu should not underestimate me. I've been underestimated before."

Pappas, who is openly gay, is a former state lawmaker who is serving his third term on the governor's Executive Council and runs a family restaurant in Manchester. He had the backing of the state's two Democratic U.S. senators, Jeanne Shaheen and Maggie Hassan, and touted his strong financial support from New Hampshire residents.

"It's about having an effort that is home-grown, that's about who we are as Granite Staters, to try to push back forcefully against what we're seeing in Washington, which are destructive policies that are undermining opportunities for working people and middle-class families," he said in an interview last week.

It was in that District that Democrat Carol Shea-Porter's decision to step down after four nonconsecutive terms resulted in a swarm of candidates seeking to replace her. They included Levi Sanders, son of Vermont senator and former presidential hopeful Bernie Sanders, who came up short.

The younger Sanders told CBS News that he would not vote for House Minority Leader Nancy Pelosi as House speaker should the Democrats take the House, but would support Rep. Barbara Lee. Sanders has not been endorsed by his father.

The district, which covers the eastern half of the state, was once reliably Republican but has flipped in each of the past four cycles. In 2016, it returned Shea-Porter to Congress but backed President Trump. CBS News rates New Hampshire's 1st District race as competitive this fall.

Edwards, who has received the backing of Mr. Trump attorney Rudy Giuliani, has sought to make the race about character and integrity, and he has also said he'd refuse to support Sanborn as the nominee. Sanborn, a four-term senator from Bedford, has acknowledged making a sexual "joke" to a Statehouse intern in 2013 but said a recent investigation into the matter was politically motivated.

Seven Republicans were competing for a chance to face Democratic U.S. Rep. Annie Kuster in the 2nd Congressional District. But most of the action was in the eastern 1st District.

On the crowded Democratic side, former Obama administration official Maura Sullivan raised more money than the other 10 candidates combined, but she's faced criticism for being both new to the state and voting in general. She moved to the state last year, and acknowledged not voting in several recent elections.

She said she and her fiancé moved to New Hampshire last year to put down roots, but her opponents have accused her of district shopping. After the New Hampshire Union Leader newspaper reported that she failed to vote in either of the past two midterm elections or the 2016 presidential primary, Sullivan said she regrets not voting more often but saw herself as a soldier and public servant.

Secretary of State William Gardner was predicting 180,000 ballots will be cast, roughly split among Democrats and Republicans. That amounts to about 19 percent of registered voters and would be a record for Democratic ballots cast in a midterm primary.

Caitlin Conant contributed to this report