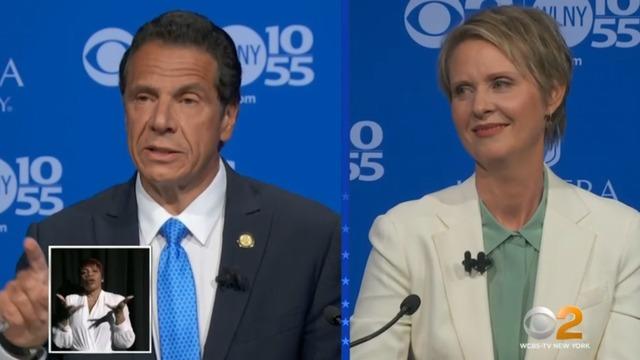 Andrew Cuomo tries to fend off celebrity challenge from Left

Actress Cynthia Nixon, best known as Miranda on Sex and the City, is running against incumbent New York Governor Andrew Cuomo in the New York Democratic gubernatorial primary. Although Cuomo is up in the polls and leads in fundraising, Nixon is hoping that the recent wave of victories of progressive, first-time women candidates over white male incumbents will crash into New York City Thursday. But as the New York Times pointed out, Nixon is not an outsider in the same way that Alexandria Ocasio-Cortez and Ayanna Pressley are. She is wealthy and white, while Ocasio-Cortez and Pressley both ran on being able to better relate to the struggles of non-whites and the working class in their increasingly diverse districts.

Regardless of the outcome, the primary has forced Gov. Cuomo, who has been floated as a potential 2020 presidential hopeful, to shift further to the left in response to Nixon's attacks.  In May, the Atlantic reported: "In the less than two months since Nixon declared her candidacy, Cuomo all but reversed his opposition to legalizing recreational marijuana, which he called 'a gateway drug' as recently as last year; proposed a ban on single-use plastic bags, again barely a year after he signed legislation barring New York City from imposing a tax on them; vowed to use his pardon power to restore voting rights to as many as 35,000 felons; and declared a state of emergency at the city's public-housing authority."

In an August debate against Nixon, Cuomo offered his firmest denial of White House ambitions in 2020, vowing that if re-elected he would finish out his third term as governor with one caveat -- "if God strikes me dead."

In the Senate, Republicans benefit from an overwhelmingly favorable map this year. Nevertheless, there is growing concern that they're facing competitive Democratic Senate candidates in several states that voted for Trump in 2016.

On Thursday, President Trump will travel to Missouri, where Republicans are hoping to flip the Senate seat currently held by Sen. Claire McCaskill, D-Missouri, from blue to red. The next day, on Friday, he heads to Mississippi, where Republicans expect they'll easily hold onto the Senate seat vacated by Sen. Thad Cochran, R-Mississippi, who retired in April.

Mr. Trump's visit to Mississippi, normally a solid red state, is a reminder that this should-be sleeper race could have high stakes if the candidate favored by the GOP establishment, Sen. Cindy Hyde Smith, fails to secure 50 percent of the vote in the special election to fill Cochran's seat.

This is not a typical Senate race: In April 2018, Mississippi Republican Gov. Phil Bryant selected Hyde-Smith to fill Cochran's vacant seat until the special election to replace him in November. She has been endorsed by Trump, but faces a challenge on the right from controversial conservative Chris McDaniel and from the Democrats by centrist African-American Mike Espy. There are no party primaries in the special election so all three of them will be on the same ballot. If no candidate receives more than 50 percent of the vote, the top two will proceed to a runoff held three weeks later on Nov. 27.

This was a scenario CBS News also raised as a possibility in March, when Cochran announced his retirement.

Another Senate race in a red state, Texas, is also concerning some senior GOP leaders. According to the New York Times, OMB Director Mick Mulvaney raised concerns that the GOP could lose a U.S. Senate seat in Texas because incumbent GOP Sen. Ted Cruz is not viewed as "likable" enough. On CBS News' Face the Nation on Sunday, RNC Chairwoman Ronna Romney McDaniel pushed back on the report, saying, "We're not going to lose Texas...Ted Cruz is an excellent representative for Texas and he is going to win that seat."

While GOP officials publicly express confidence in Cruz's re-election, Mr. Trump has announced that he is going to travel to Texas to campaign for Cruz in early October. A recent Emerson College poll showed Cruz with a one-point lead over his Democratic opponent Rep. Beto O'Rourke. The same poll has incumbent Republican Gov. Abbott with a 20 point advantage over his competitor Lupe Valdez. A recent NBC News/Marist poll has similarly too-close-for-comfort findings for Cruz, with the incumbent senator only 4 points ahead of O'Rourke, while Abbott has a comfortable 19 point lead above Valdez. If these polls are indicative of potential split ticket Abbott-O'Rourke voters this November, they are bad news for Cruz.

The fight to take over retiring Republican Bob Corker's Tennessee Senate seat is also shaping up to be a tight one in the deep red state. Republican Rep. Marsha Blackburn, a member of Trump's transition team, is running against popular former two-term Democratic Governor Phil Bredesen. A recent NBC News/Marist poll showed the race neck-and-neck, with Bredesen leading Blackburn by two points (48-46 percent).

What to know - primary overview

The Democrats need to flip 23 Republican-held districts to take control of the House of Representatives this fall, and CBS News rates one primary this week as competitive in the fall -- New Hampshire's 1st District. CBS News rates this open race where Democratic Rep. Carol Shea-Porter is retiring as "very likely competitive."

There are 11 candidates running to win the Democratic nomination: Maura Sullivan, Deaglan McEachern, Mindi Messmer, Lincoln Soldati, Naomi Andrews, Terrence O'Rourke, Chris Pappas, Mark MacKenzie, William Martin, Paul Cardinal and Levi Sanders, who is the son of Bernie Sanders. The only televised debate was on Wednesday and many candidates discussed health care reform and gun control. New Hampshire Public Radio cited that the two potential frontrunners in the race are Maura Sullivan and Chris Pappas, according to some polls. Sullivan has raised the most money compared to her Democratic challengers.

The Republican primary is also crowded with five candidates vying for the Republican nomination. The frontrunners on the Republican side are state Sen. Andy Sanborn and former police chief Eddie Edwards.

New Hampshire, New York and Rhode Island all have gubernatorial primaries this week.

In New Hampshire, incumbent Republican Gov. Chris Sununu is running for re-election and is unopposed in the primary. There are two Democratic candidates for governor: former state Sen. Molly Kelly and Portsmouth Mayor Steve Marchand. In a recent debate, they didn't attack each other as much as they focused on Sununu. Kelly has raised more money than Marchand and has dominated the airwaves. Kelly has also received endorsements from New Hampshire's two Democratic Senators Jeanne Shaheen and Maggie Hassan, as well as Planned Parenthood and EMILY's List.

In New York, incumbent Democratic Gov. Andrew Cuomo faces a challenge on the left from celebrity progressive candidate Cynthia Nixon. Dutchess County Executive Marcus Molinaro will most likely be the Republican gubernatorial nominee. He was selected as the Republican party's choice in May.

In Rhode Island, incumbent Democratic Gov. Gina Raimondo is seeking re-election and faces a primary challenge from her left from former Rhode Island Secretary of State Matt Brown. The Republican favorite seems to be Cranston Mayor Allan Fung. Fung ran for governor in 2014, but lost to Raimondo. Fung was the first Chinese American Mayor in Rhode Island.