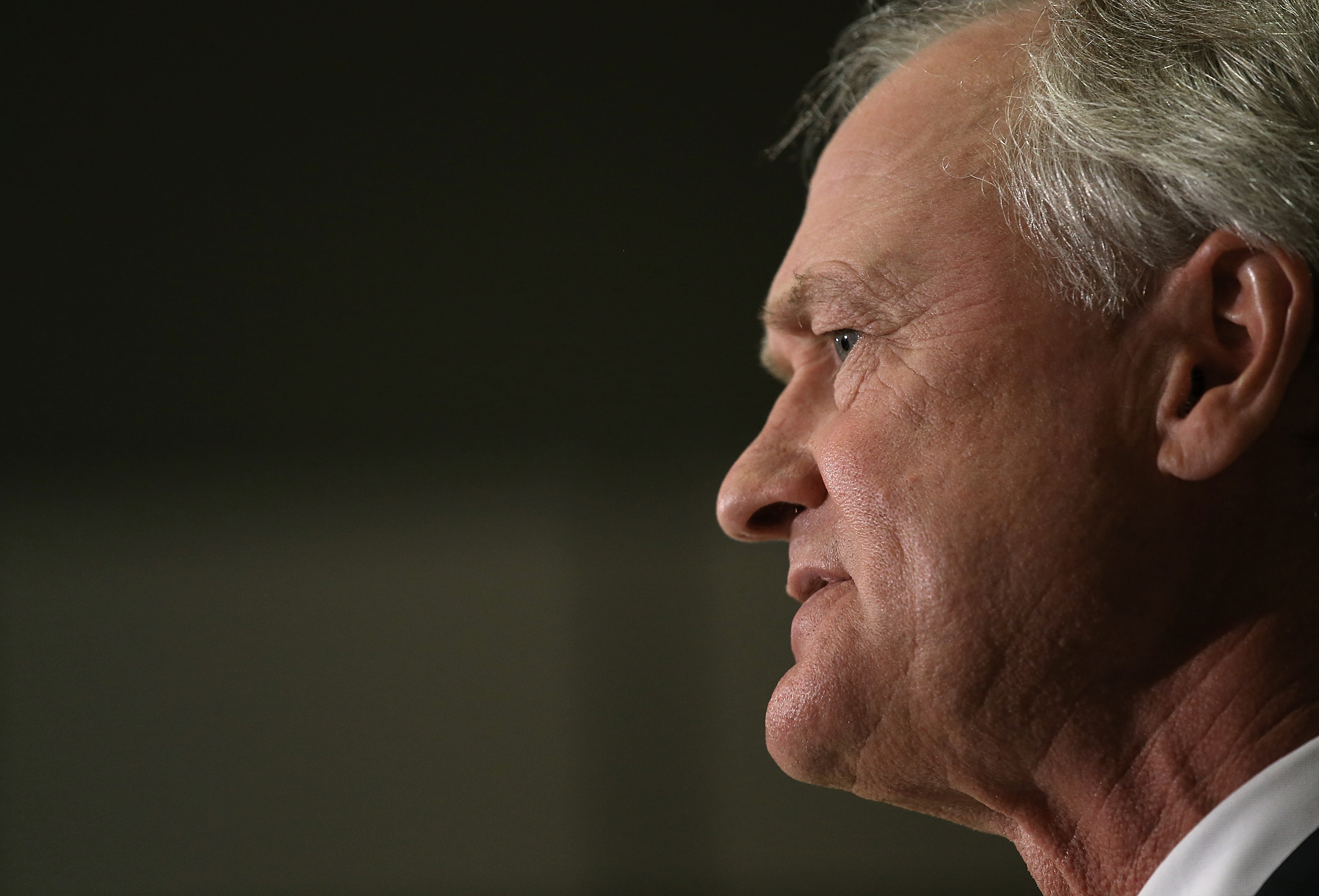 LACONIA, New Hampshire -- Presidential candidate Lincoln Chafee stands before a few dozen people at a meeting of New Hampshire's Belknap County Democrats. The Republican-turned-independent-turned-Democrat gets nods of approval when he tells them he was the only Republican senator to vote against authorizing the war in Iraq.

Then smiles turn to laughter when he pitches another idea: The U.S. should switch to the metric system.

The former Rhode Island governor has visited the first primary state of New Hampshire a dozen times this year. But he seems to be making barely a ripple - aside from curiosity about some of his policy platforms.

In Belknap County, at least some Democrats seemed intrigued by Chafee as someone who could represent an alternative to Hillary Rodham Clinton, the commanding favorite for the nomination. But they are also puzzled by what he talks about sometimes.

Chafee told the group he wants to bring National Security Agency leaker Edward Snowden home, dropping all charges against him. Paula Trombi of Meredith said she liked some of what he said but was taken aback and disappointed by his position on Snowden. She also can't understand why he keeps talking about the metric system, of all things.

"With all the troubles that are going on, that seems almost odd to bring up," she said.

Dave Kerr, a selectman in Barnstead, said he agreed with Chafee that billions have been spent on the war that could have been better spent on roads and schools. But Kerr was leaving with a poster and a donation envelope for another Democratic rival, Vermont Sen. Bernie Sanders, who also opposed the Iraq war. A Sanders supporter had handed them out, and Kerr wondered why Chafee hadn't, also.

Chafee is known to dislike fundraising and is just starting to raise money for a race where spending is expected to be measured in the billions. His past campaigns - two Senate races as a Republican and a governor's race as an independent - have relied on an old New England family fortune amassed over generations.

Dave Pollak, chairman of Belknap County Democrats, said he agreed with Chafee that Snowden is a whistleblower and should not be prosecuted. With Chafee's background in different parties, Pollak sees him as someone who could bridge the ideological divide between Democrats and Republicans. He even likes the metric system idea.

But Pollak finds other aspects of Chafee's campaign peculiar.

Clinton's campaign is in contact with the group every week inviting its members to events, has multiple campaign offices open and created specialty groups for supporters such as "High Schoolers for Hillary." The Sanders campaign sends regular "rousing" emails on issues, Pollak said. The campaign for another rival, former Maryland Gov. Martin O'Malley, also has staff in the state.

Chafee, on the other hand, has no campaign staff in New Hampshire yet and appears to be running on a shoestring. Although Chafee has a vacation home further north in Franconia, he said he hasn't been staying there during the campaign. Instead, he drives to his New Hampshire events from Rhode Island, a five-hour round trip this evening. He was back in Somersworth, New Hampshire, the following day.

It makes Pollak wonder how serious he is.

"What's the organization?" he asks. "What gives you confidence that he can get the voters out?"

Chafee gets testy when asked about matters like that. He says it's an "evolutionary process."

"You guys never ask anything about the substance," he told a reporter. "It's always about how many people, how much money have you raised. Ugh.

"I wish there was more intellectual discussion about the issues in these campaigns."

As he spoke, Chafee aide Jonathan Stevens handed out stickers saying "Trust Chafee." The design and motto are identical to the one from his 2010 campaign for governor. Asked if they're 2010 leftovers, Stevens replied, "We recycle everything."

Stickers bearing this year's motto, "Fresh Ideas for America," were nowhere in sight.