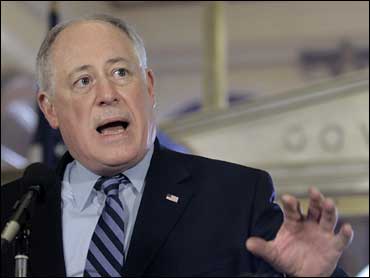 Quinn's order officially put the Illinois Reform Commission under the office of the governor. He had created the commission when he was still lieutenant governor, after Blagojevich's arrest last month on federal corruption charges.

The 60-year-old Quinn was elevated to Illinois' chief executive on Thursday when the state Senate voted 59-0 to convict Blagojevich of abuse of power, automatically ousting him. He became the first U.S. governor in more than 20 years to be removed by impeachment.

"We've had a body blow to our politics and government in the last seven weeks and two days but that's over," Quinn said at a news conference. "Today is a beginning, a start. ... We're going to start to fumigate state government from top to bottom to make sure it has no corruption."

Quinn, a Democrat like his predecessor, pledged to work with lawmakers and other state officials as a team to get the job done. But he quickly came under fire from the Illinois Republican Party, which said he stood by while Blagojevich committed the actions that led to his impeachment.

Unlike Blagojevich, Quinn spent the night at the Executive Mansion in Springfield. Blagojevich (pronounced blah-GOY'-uh-vich) had refused to move from Chicago, instead using a state plane to fly to Springfield - roughly 175 miles away - when needed and rarely staying overnight at the mansion.

Quinn also said Friday he wants push back next year's primary election by six or seven months so officials have more time to focus on state government before campaigning. Illinois traditionally holds primaries in March and general elections in November, meaning virtually an entire year is dominated by politics.

"A lot of people think we are in perpetual campaign mode, perpetual fundraising mode," Quinn said.

In Illinois, governor candidates do not pick their running mates. Lieutenant governor candidates run separately in party primaries, and the two run together in the general election. Quinn was the state treasurer from 1991 to 1995 and unsuccessfully ran for U.S. Senate in 1996.

Blagojevich had boycotted the first three days of the impeachment trial, calling the proceedings a kangaroo court. But on Thursday, he went before the Senate to fight for his job, delivering a 47-minute plea that was, by turns, defiant, humble and sentimental.

Among other things, he was accused of trying to sell Barack Obama's vacant U.S. Senate seat. But Blagojevich insisted he was innocent and the trial rules were unfair.

"You haven't proved a crime, and you can't because it didn't happen," Blagojevich told lawmakers. "How can you throw a governor out of office with insufficient and incomplete evidence?"

But senators were unswayed, not only ousting him but barring Blagojevich from ever holding public office in the state again.

"He failed the test of character. He is beneath the dignity of the state of Illinois. He is no longer worthy to be our governor," said Sen. Matt Murphy, a Republican from suburban Chicago.

"I think what's been very disappointing and very frustrating to everyone involved in the process … is that the governor could have brought forward information and evidence and witnesses, and he refused at every turn to do so," Illinois State Attorney General Lisa Madigan said on CBS' The Early Show. "He didn't participate when the House was considering impeachment. He obviously refused to participate in the actual trial in front of the Senate.

"But he did come to make a closing statement where he wasn't under oath, and therefore said a whole series of things that ultimately were taken as incredible, as well as potentially going to be used against him in his ultimate criminal trial."

Federal prosecutors are drawing up an indictment against Blagojevich on corruption charges. Outside his Chicago home Thursday night, Blagojevich vowed to "keep fighting to clear my name," and added: "Give me a chance to show you that I haven't let you down."

But the Senate verdict brought closed one chapter in what one lawmaker branded "the freak show" in Illinois. Almost the entire political establishment lined up against him. The crisis paralyzed state government and made Blagojevich and his helmet of lush, dark hair a punchline from coast to coast.

Obama himself, fresh from his historic election victory, was forced to look into the matter and issued a report concluding that no one in his inner circle had done anything wrong.

"Today ends a painful episode for Illinois," the president said in a Thursday night statement. "For months, the state had been crippled by a crisis of leadership. Now that cloud has lifted."

Blagojevich did not stick around to hear the vote. He took a state plane back to Chicago. He did, however, use his last day in office to grant clemency to a prominent Chicago real estate developer and a former drug dealer, just hours before the vote to oust him.

Seven other U.S. governors have been removed by impeachment, the most recent being Arizona's Evan Mecham in 1988. Illinois never before impeached a governor, despite its long and rich history of graft.

By Thursday night, Blagojevich's name and picture had disappeared from the state's official Web site. Instead, an unobtrusive "Pat Quinn, Governor" was in the upper right corner.

"I think it's a shame that with our city and Illinois, everybody thinks we're all corrupt," Gene Ciepierski, 54, said after watching the trial's conclusion on a TV at Chicago's beloved Billy Goat Tavern. "To think he would do something like that, it hurts more than anything."