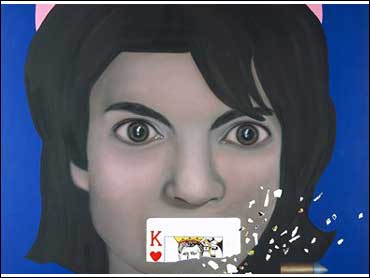 New faces and untraditional styles of portraiture are showing up at the National Portrait Gallery in a mix that includes Neil Armstrong, Nancy Reagan, and a dozen high school students from Washington.

The new exhibit "Portraiture Now: Framing Memory" features contemporary artists who use portraits to explore history and culture. In a departure for the gallery, it blends contemporary figures such as historian Howard Zinn and civil rights activist Angela Davis with dead icons and leaders including the Rev. Martin Luther King, Cesar Chavez and Jacqueline Kennedy.

"In a sense, you get a picture of our nation, and that sets the stage for then going back into the historic galleries and thinking about 'where did we come from?"' said Frank Goodyear, curator of photographs.

The portrait gallery is showing signs of change beyond its bright new building. The museum did away with a "10-year-dead rule" for its permanent collection in 2001, helping to bring more contemporary figures into the galleries. But because the gallery closed in 2000 for a long renovation, visitors couldn't see the new faces in the permanent collection until the reopening in July 2006.

Many photos, prints and paintings are still only displayed temporarily, on loan from artists and other collections. But the museum is expanding its acquisition of portraits of current figures.

One of the recent additions is a portrait of Steven Squyres, the chief scientist for NASA's Mars Rover mission. Goodyear said it's an example of how the museum is seeking out portraits of the most historically significant living figures.

The "Framing Memory" exhibit includes new, abstract approaches to the traditional idea of a portrait.

For example, try to find Armstrong in Tina Mion's portrait of the first man to walk on the moon. Instead of depicting Armstrong's face, Mion's version is an "object portrait" that tells the story of his moon adventure with a mix of symbols - a slice of Swiss cheese for the moon, Q-tips and marshmallows for the moon lander, and a toothpick with an American flag.

"She has a wonderful wit, and that's not a feature of a lot of portraits," said Wendy Wick Reaves, curator of prints and drawings. "You can walk through the portrait gallery and see a lack of wit in certain places."

Two pieces from Mion's series of paintings of the first ladies - "Stop Action Reaction" portraying Kennedy and "Eyes Only for You" portraying Reagan - show the subjects not as "stiff formal figures but as women whose personal stories represent women's experiences," Reaves said.

The portrait of Kennedy shows her holding a "king" playing card depicting her husband, John F. Kennedy, with the card
shattered by a bullet.

2Another artist, Berkeley, Calif.-based Brett Cook, contributed two murals from his residency this year with students at Washington's Duke Ellington School of the Arts. The students traced and painted their own self portraits for the murals on mirrored paper to include the viewer's reflection in a changing group scene.

Works by Alfredo Arreguin, Kerry James Marshall and Faith
Ringgold broaden the exhibit to include experiences from black and Latino history.

A painting by Arreguin, "Good Harvest," is a tribute to farm labor leader and civil rights activist Chavez, an example of the Latino history the museum is working to expand in its own collection, said Ann Shumard, curator of photographs.

"We really hope ... that visitors coming to the museum will see themselves in some way or connect with their history, as well as the larger history of the nation," she said.

Also on display at least through the summer: "Portraits of
Sandra Day O'Connor," with 25 different interpretations of the first woman to serve on the Supreme Court; "Americans Now," featuring prominent sports and entertainment figures such as Lance Armstrong; and "New Arrivals," opening June 8 to feature newly acquired objects.