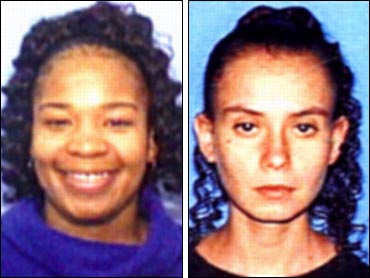 Authorities said Monday they have arrested three more people in a smuggling operation that packed dozens of illegal immigrants into a sweltering semitrailer last week, killing 19 of them.

Fatima Holloway, 28, identified as riding in the cab of the truck, turned herself in to authorities in Cleveland, U.S. Attorney Michael Shelby said.

Authorities described a brazen attempt by two of the suspects to extort money from relatives of the immigrants for the safe return of a 3-year-old boy.

According to court papers, Juan Cisneros, 22, and Erica Cardenas, 23, were arrested by undercover agents Thursday in McAllen after trying to get between $1,300 and $1,500 for the toddler, a son of one of those put aboard the trailer.

The boy has since been returned to his mother, who is among 54 survivors in custody of federal immigration agents in Houston.

All three suspects were charged with transporting, harboring and conspiring to transport illegal immigrants. Their hometowns were not released and it was not immediately clear whether they had attorneys.

Authorities said they were still looking for at least two more people.

Truck driver Tyrone Williams, 32, of Schenectady, N.Y., already faces the same charge. He was arrested last Wednesday, hours after 17 people were found dead in and around his trailer abandoned at a truck stop near Victoria, 100 miles southwest of Houston.

Williams told authorities two men paid him $2,500 to transport 16 illegal immigrants from the Mexican border and that he didn't watch as the men loaded their charges into the trailer, according to court documents. Authorities say the trailer was carrying at least 70 people from Mexico and Central America - far too many for the poor ventilation.

Williams told authorities that after discovering the dead and dying immigrants, he unhitched the trailer and drove to Houston, according to court documents. His attorney said last week he was looking into whether Williams was properly advised of his rights.

"These kinds of tragedies can be avoided," said Eduardo Ibarrola of the Mexican Consulate in Houston. "Both governments should move into a better legal framework for migration. We have to do that. We also have to improve economic conditions but the important thing now is to prosecute and dismantle this criminal organization."