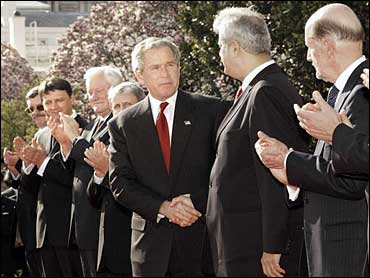 
"Welcome to the greatest and most successful alliance in history" said Secretary of State Colin Powell to the seven prime ministers representing NATO's newest members.

Six of the seven — Bulgaria, Estonia, Latvia, Lithuania and Romania - were members of the Warsaw Pact, the old Soviet Union's answer to NATO, and its only rival for 50 years. The seventh, Slovenia, was part of the former Yugolslavia.

Now these seven states are all independent and democratic.

Since the breakup of the Soviet Union, NATO has grown first from 16 to 19 members, with the addition of Poland, Hungary and the Czech Republic, and now to 26.

The addition of the new members, says a State Department official who's expertise includes NATO, "firmly establishes them in the West's camp, widens the circle of democratic nations and provides a bit of fresh blood to the organization" The Bush administration is especially pleased that the seven new NATO members are already making individual contributions to international security.

President Bush, praising the seven at a White House ceremony, noted "…as members of NATO they are stepping forward to secure the lives and freedoms of others," referring to the 1,500 troops which they are contributing to the stabilization of Iraq.

And Iraq is only the latest hot spot where the administration is happy to see NATO play an increasingly important role, relieving Washington of the need to do all the mopping up after military interventions.

NATO has been looking for new missions and it seems to have found them in the past few years. First in the Bosnia and Kosovo, then in Afghanistan and now in Iraq, NATO has found a role to play in security and stabilization following conflict. Involvement in these operations has long since ended the old debate inside NATO as to whether the organization should participate in so-called "out of area" conflicts.

Speaking for NATO's newest members and picking up on Powell's theme, Prime Minister Mikulas Dzurinda of the Slovak Republic said "We are erasing the dividing line of Yalta and the immorality of Munich."

For NATO's new Secretary General, Jaap de Hoop Scheffer, Afghanistan is the main focus. Scheffer, working with German troops taking the lead under the NATO umbrella, is trying not only to firm up the security situation in Kabul, but he's also working to extend NATO's reach into the provinces, where resistance comes from the warlords as well as remnants of the Taliban who still exert power in a few pockets around the country.

However, it's already clear NATO will play an increasingly larger role in Iraq and security stabilization there, although exactly how is still being debated. NATO could take over more of the security operation on the ground or it could become more involved in training Iraq's army, or both.

One thing seems clear: the politicians, diplomats, generals and admirals who run NATO, not to mention the international bureaucrats who staff it, are quite busy looking to the future, not the past. The Soviet Union and the Warsaw Pact may be gone, but there's already an official NATO-Russia dialogue and there are ongoing security duties in the Mediterranean. Counter-terrorism and intelligence sharing are high on the agenda. Almost no mission is being ruled out, including security assistance for this summer's Olympic Games in Athens.

With Albania, Croatia and Macedonia waiting in the wings for membership, it appears NATO's future viability is set. As the secretary of state likes to say, it's hard to close down an organization when people are standing in line waiting to join.