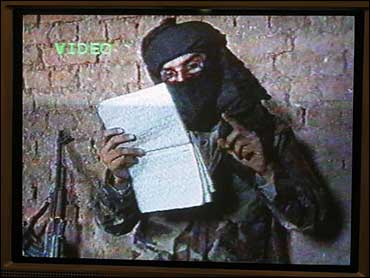 If authentic, the video would be the first al Qaeda claim of responsibility for the suicide attacks on foreign housing compounds in Riyadh, which killed 26 people and nine attackers, and bombings in Casablanca that killed 43 people and 12 attackers.

But CBS News Correspondent Mark Knoller says, even if it is authentic, "the tape only confirms what the U.S. already knows: that al Qaeda continues to engage in acts of terrorism and remains a threat that must be challenged."

The White House refused initial comment on the tape.

Terrorism expert Jessica Stern, repeating a Knoller question said, "Why are they continually releasing videos and audio tapes? One possibility is to make sure the attention of the world is focused on them that nobody forgets about them and to keep Americans afraid."

Obtained Saturday by The Associated Press, the video also appeared to reflect an increasing alliance among three top opponents of the United States in Afghanistan: Al Qaeda; the remnants of the former Taliban regime; and the followers of Gulbuddin Hekmatyar, an Afghan rebel leader whom the United States calls a terrorist and has tried to kill.

The man on the scratchy videocassette, who identified himself as Abu Haris Abdul Hakim, said he speaks in the name of all three groups. He spoke in Arabic, but did not give his nationality. His face was covered by a black turban.

The videotape was obtained from a senior intelligence official in Hekmatyar's Hezb-e-Islami organization. The official confirmed that the speaker on the tape was speaking for Hekmatyar's party, which he said was working with al Qaeda and the Taliban.

The speaker in the video says al Qaeda is active and planning new attacks this month, saying, "Osama is alive and in Afghanistan." Though he suggests the attacks will take place in Afghanistan, he also points to wider operations.

"The recent attacks in Riyadh and Morocco were planned and they were part of our martyrdom operations. You will see more such attacks in the future," the speaker in the video said.

Saudi and U.S. officials have blamed al Qaeda for the Riyadh attacks. Moroccan authorities say an international terrorism ring carried out the Casablanca attacks, and they are looking at possible links to al Qaeda.

At one point, the man holds up a crudely written sign that says June 14th, apparently a reference to the date it was made - though it was impossible to confirm.

"Oh our brothers in Palestine, Chechnya, Kashmir and Iraq: We will have good news for you very soon. And it will be about our supremacy over the Americans. This will be in the shape of martyrdom (suicide) attacks against Americans in the current month," Hakim said.

Insurgents in Afghanistan have stepped up their attacks against U.S. forces in recent months. On Saturday, U.S.-led coalition forces poured troops along Afghanistan's eastern border in an operation to prevent insurgents from crossing into Afghan territory from Pakistan to launch attacks, the U.S. military said.

Operation Unified Resolve began this week in Gosta and nearby districts of Nangarhar province, an area near the Pakistan frontier that has "historically served as an al Qaeda stronghold," U.S. military spokesman Col. Rodney Davis said in an e-mailed statement from Bagram Air Base.

A staging base in the provincial capital of Jalalabad was set up Wednesday and on Saturday the bulk of U.S. forces involved "conducted an air assault and ground movement in order to rapidly position forces along the Afghanistan-Pakistan border ... to prevent threat elements from crossing the border," Davis said.

Across the border in Pakistan, dozens of tribesmen on Saturday fired at a convoy of Pakistani troops who for the first time earlier this week moved into the remote tribal region bordering Afghanistan, a tribal elder said.

Neither side suffered casualties in the brief exchange of fire in the region of Salala, 75 miles northeast of Peshawar, Imdadullah Khan told The Associated Press.

"Talks are underway between the army and the tribesmen to solve this issue," he said.

Pakistan, a key U.S. ally in its war on terrorism, has moved troops into the tense region to track down possible Taliban and al Qaeda remnants.

The speaker on the new videotape said the coming al Qaeda attacks would mimic those carried out in the Afghan cities and towns of Kabul, Kandahar and Spinboldak. On June 7, an explosive-laden taxi rammed a bus carrying German peacekeepers in Kabul, killing four Germans and an Afghan civilian. In both Kandahar and Spinboldak there have been grenade assaults and remote controlled bombings.

"Our mujahedeen brothers are regrouping in Kunar, Khost, Gardez, Jalalabad, Kabul and Logar," he said, referring to parts of Afghanistan. "They are engaged in preparations for the attack."

In the 35-minute video, the speaker is seen seated on a straw mat on the floor of a brick mud hut with a Kalashnikov assault rifle by his side as he read from several sheets of paper. With his face hidden, it was impossible to confirm his identity, though the intelligence official also said it was Hakim.

During the Taliban rule, Hakim was known to speak in the name of al Qaeda in interviews with the official news agency Bakhtar, run by the hard-line Islamic religious militia.

In the last week, pamphlets recruiting Afghans for suicide bombings have been circulated in Afghanistan's southeastern regions. The pamphlets - signed by Mullah Akhtar Uzmani, the Taliban's former military chief and a key lieutenant of the Taliban leader, Mullah Mohammed Omar - threatened a suicide bombing before the end of this month if three Afghan officials identified by name were not fired.

The speaker in the videotape said al Qaeda and its allies were "alive and have started operations again. And very soon we will bring the Americans and their agents to justice."

The intelligence official said al Qaeda, Taliban and Hekmatyar forces were working together but in most parts of the country they have separate commands.

In the northeastern regions of Afghanistan, al Qaeda forces are commanded by Abu Ali Al Maliki, who fought with Hekmatyar against other Afghan factions during the 1992-96 civil war, according to the intelligence official.

The main Taliban figure in that region is Mullah Abdul Raouf, believed to be the former Taliban governor of Paktia province, he said.