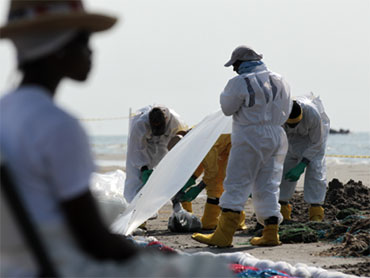 A new, $1.5 million television advertisement campaign organized by VoteVets.org calling America's dependence on oil a threat to national security will hit television screens in the coming days, according to the group.

The one-minute ad, which can be seen at left, features former Louisiana National Guardsman Evan Wolf, who took part in cleanup efforts, set against a backdrop of the Louisiana coast.

The ad claims that by diverting guardsmen to the Gulf, the government weakened its ability to address national security concerns, among them the wars in Iraq and Afghanistan - a problem, the ad suggests, that could be avoided by eliminating America's dependence on oil.

"When I signed on with the National Guard, I did it to help protect America from our enemies, like in the Persian Gulf, not to clean up an oil company mess in the Gulf of Mexico," Wolf says. "We'll do whatever mission we're given, and do it well. But America needs a new mission. Because whether it's deep-drilling oil out here or spending a billion dollars a day on oil from our enemies overseas our dependence on oil is threatening our national security."

The ad also makes reference to the American Power Act, the energy and climate bill proposed by Senators John Kerry (D-Mass.) and Joe Lieberman (I-Conn.) to try and reduce carbon emissions and curb oil dependence. The ad asks viewers to reach out to their senators and push them to seek out energy alternatives.