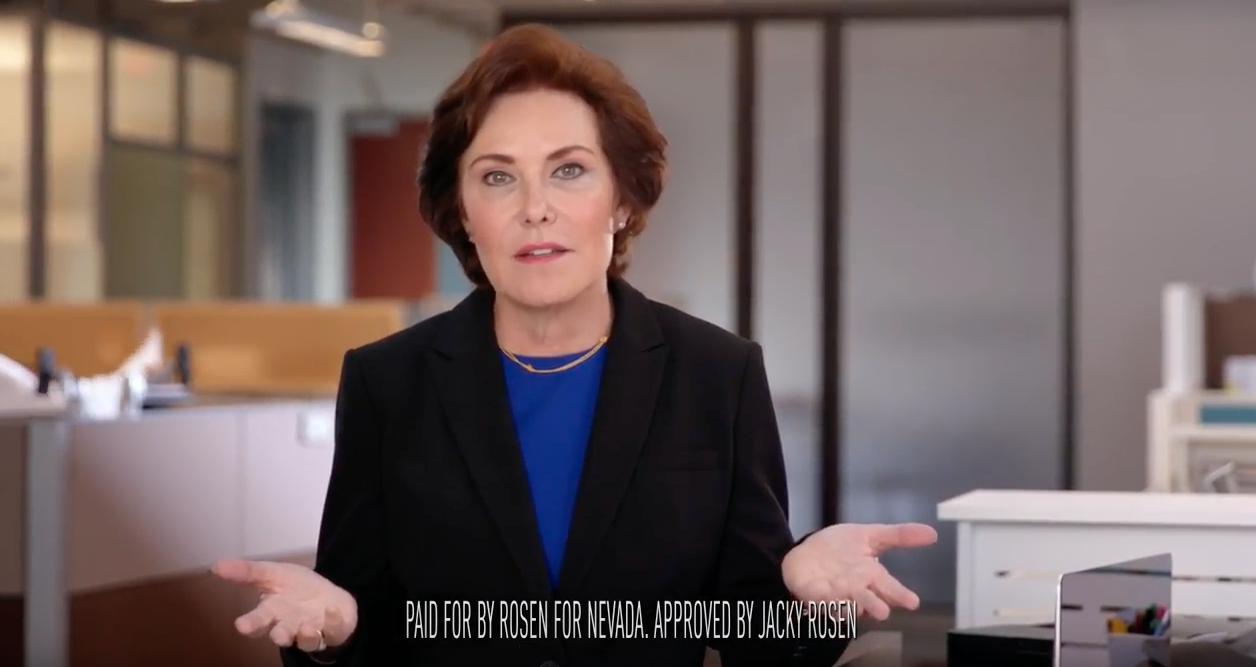 Democratic senate candidate Rep. Jacky Rosen, of Nevada, is answering the challenge from the Republican incumbent she hopes to unseat, GOP Sen. Dean Heller. The sitting Nevada senator has been calling on her to compare their records on health care.

In a new 30-second TV ad running statewide in Nevada as part of the campaigns ongoing seven-figure TV ad buy, Rosen answers the challenge and addresses Heller directly: "You voted to let insurance companies discriminate against people with pre-existing conditions, charge older people more, and take away coverage from 200,000 Nevadans."

She's responding to a Heller ad, in which he tells voters she's done "nothing" to fix health care.

"Dean Heller wants to compare his record of caving to party leaders and special interests to take away health care coverage and protections from hundreds of thousands of Nevadans with Jacky Rosen's record of consistently protecting Nevadans' health care? Challenge accepted," Kazin said in a statement.

Rosen and Heller have been exchanging accusations since April, and Rosen's campaign ad is the latest shot at Heller. She has called Heller a "spineless" senator in one ad and compared him to an inflatable tube man for bending to Republican pressure in another.

Heller, who after initially criticizing GOP efforts to repeal and replace the Affordable Care Act last year, saying it would "harm tens of thousands of Nevadans," ultimately voted to support repeal legislation.

Even with GOP control of Congress and the presidency, the health care bill Heller co-sponsored with Sens. Lindsey Graham and Bill Cassidy to repeal and replace the Affordable Care Act failed. In August, Heller and 10 other Republicans introduced legislation to address the issue of pre-existing conditions.

The Rosen campaign's health care focus is in line with the Democratic Party's emphasis on health care issues in the midterm elections. In a letter to colleagues earlier this month, House Minority Leader Nancy Pelosi said that members of the caucus would be developing legislation to deliver on lowering health care costs and prescription drug prices if Democrats gain control of the House.

But it also comes as more liberal Democrats push forward with their own costly "Medicare for All" agenda as a means to counter Republican efforts to undermine former President Obama's health care law.

The proposal, sponsored Sen. Bernie Sanders, I-Vermont, and backed by 2018 and potential 2020 contenders Sens. Kamala Harris, Kirsten Gillibrand and Cory Booker, aims to set up a single-payer health care system that would have the government foot much of the bill, increasing government health care spending by a whopping $32 trillion over the next 10 years. The division in party focus could set up a potentially confusing midterm message.

Nevertheless, health care appears to be a key voting issue for voters in the midterm elections. A CBS News poll found last month that three in four voters say a candidate must agree with them on health care in order to get their vote in 2018.