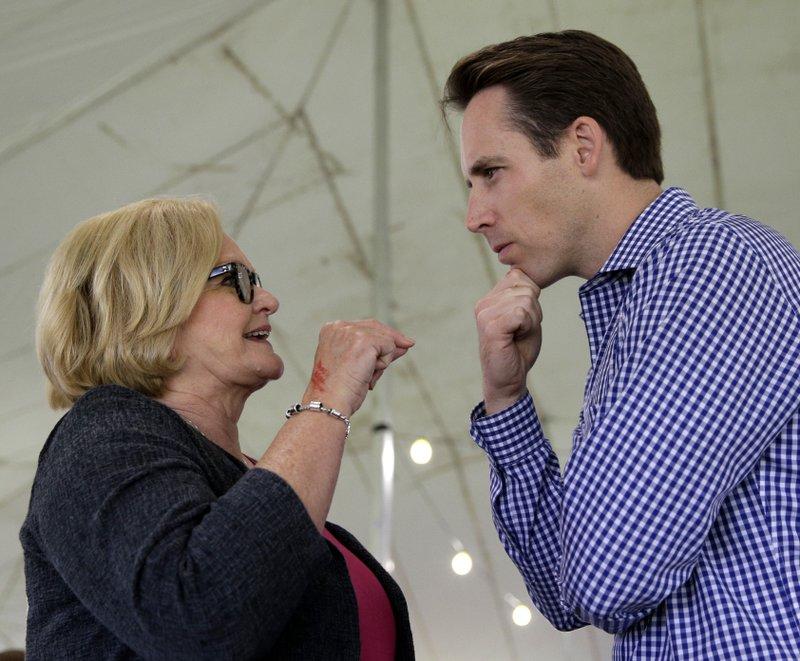 Editor's Note: This story has been updated with more detail on the Republican attorneys general lawsuit to strike down the Affordable Care Act and the legislation proposed by Republican senators on pre-existing conditions.

Under increasing pressure by Democratic groups and candidates, a number of Senate Republican candidates in competitive races have begun talking about health care in the last week. GOP nominees in Missouri, West Virginia, Montana, North Dakota and Florida are all voicing their support through social media and op-eds for a health care plan that protects patients with pre-existing conditions. It's a far different message from 2016, when Republicans campaigned on a promise to repeal the Affordable Care Act. Though GOP lawmakers, with majorities in the House and Senate, tried to end the ACA, they did not succeed.

While most Republican candidates this cycle have focused on tax cuts and immigration, Democrats have been campaigning aggressively on health care, an issue voters care deeply about. An August CBS News Poll found that health care is the item voters may be the least willing to compromise on, with three in four saying a candidate must agree with them on health care to get their vote.

Senate candidate and current Missouri Attorney General Josh Hawley addressed pre-existing conditions last week in an op-ed in the Springfield News-Leader calling for better health care legislation. "Insurers should also be required to cover individuals with preexisting conditions and young people on their parents' insurance, up to age 26," Hawley wrote in the proposal.

Hawley's op-ed came after his opponent Senator Claire McCaskill traveled across the state campaigning on the need to protect health care. McCaskill has held seven roundtables on health care alone in the last two months. She has slammed Hawley for signing onto a lawsuit with 19 Republican attorneys general to declare the Affordable Care Act (ACA), which protects individuals with pre-existing conditions, unconstitutional on the basis of the nullification of the individual mandate tax penalty by Congress last year when it passed its tax cut bill.

"Josh Hawley decided to use your taxpayer dollars to file a lawsuit that would take away important prescription drug coverage for seniors through Medicare and end all of the consumer protections under the ACA — including protections for Missourians with pre-existing conditions such as asthma, high blood pressure, cancer or diabetes," she wrote in an op-ed last week.

In fact, a filing last month in the GOP attorneys general lawsuit targets the pre-existing conditions provision. Texas Attorney General Ken Paxton, who's leading the lawsuit against the ACA, asked the court to strike the ACA's requirement that pre-existing conditions be covered by insurers, even if the judge allows the health care law to stand.

Hawley isn't the only candidate who's sounding new notes on health care. Patrick Morrisey in West Virginia, Gov. Rick Scott in Florida, Rep. Kevin Cramer in North Dakota, and Matt Rosendale in Montana have also tweeted out their support for covering preexisting conditions. All four men are Republican candidates who are challenging Democratic incumbents running for reelection in states President Trump won in the 2016 election.

The change in campaign messaging aligns with a new proposal in Washington co-sponsored last week by Sen. Dean Heller, who faces a tough reelection fight. Heller and 10 other Republicans introduced a bill on Thursday to address pre-existing conditions. Heller, like Cramer in North Dakota, voted to repeal the ACA, which included insurance guarantees for people with pre-existing conditions.

But while the bill would keep individual market insurers from denying coverage to people with pre-existing conditions, or charging them more, the Wall Street Journal points out that "insurers would still be able to exclude any coverage related to that condition, however, and could vary premiums based on age and gender."

Pollitz's assessment matches the Journal's -- that Heller's legislation only touches the first two, not the third. Under the GOP legislation, she explained, an insurance company could offer a cancer patient a policy that doesn't charge more simply because she is a cancer patient but wouldn't have to cover the care for cancer.

Democratic Senatorial Campaign Committee (DSCC) spokesman David Bergstein derided the legislation in a statement,  calling it "a sham bill that doesn't actually do anything and won't save Republican Senate Candidates." The National Republican Senatorial Committee did not return CBS News' request for comment.

The Senate could bring up the legislation when it returns after Labor Day, but it's unlikely because lawmakers have a packed agenda that includes confirming Supreme Court Justice nominee Brett Kavanagh, averting a government shutdown, and potentially drafting a new NAFTA deal.