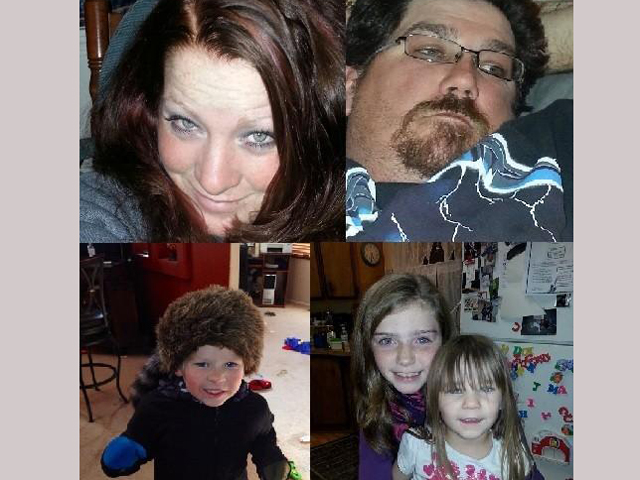 RENO, Nev. - Rescue teams worked into the night in the bitter cold and are hoping to resume an aerial search Tuesday for a couple and four children who have been missing since Sunday when they went to play in the snow in the remote mountains of northwest Nevada.

The temperature was expected to drop below zero again early Tuesday after plunging to minus-16 degrees the day before in Lovelock in the rugged area where the group was believed to be, about 100 miles northeast of Reno.

"It's got to be brutal out there," said Mark Turney, a spokesman for the U.S. Bureau of Land Management. "Let's hope they are found quick."

Pershing County deputies said aircraft and crews on the ground were searching for James Glanton, 34, his girlfriend Christina McIntee, 25, and the four children: a 10-year-old, two 4-year-olds and a 3-year-old.

Two of the kids are the adults' children, while one is a niece and one is a nephew, according to the Pershing County sheriff's office, which identified them as Evan Glanton, Chloe Glanton, Shelby Fitzpatrick and Tate McIntee.

The family has not had any communication with others since they went missing, according to Sheila Reitz of the sheriff's office.

They went to the Seven Troughs area on isolated federal land about noon on Sunday in a silver Jeep with a black top, authorities said. It was unclear what supplies they might have been carrying.

"I'm hoping they all huddled together and stayed in the Jeep," said Nevada Highway Patrol Trooper Chuck Allen, who added that the area has spotty cellular coverage. "That would be a best-case scenario."

The search for the group began Sunday evening. A Navy search-and-rescue team and the Civil Air Patrol, an all-volunteer auxiliary of the U.S. Air Force, were assisting the sheriff's office by searching a concentrated area where the group is thought to be.

Two planes scoured the area Monday and three could go out Tuesday if the group isn't found, Maj. Thomas Cooper said. Several inches of snow was on the ground in the area, but the black top on the silver 2005 Jeep should help make it easier to spot from the air, authorities said.

While the cold made for dangerous conditions, the clear weather was working in the pilots' favor. The forecast called for mostly sunny again on Tuesday with clouds moving in Tuesday night.

The cold "is not a big issue," Cooper said. "We're concerned about stuff coming out of the sky."

The area is on land managed by the BLM.

"It is a beautiful area out there. Parts of it are extremely remote," said Turney, who was there three weeks ago. He said that other than one main road, most of the roads are dirt and more easily traveled by ATVs or other off-road vehicles.

"The roads are basically improved two-tracks out there," Turney said.

The Seven Troughs area is named after a series of seven parallel canyons below Seven Trough Peak - elevation 7,474 feet - in the Kamma Mountains stretching north across the Pershing-Humboldt county line.

It's about 20 miles northwest of where Lovelock sits on Interstate 80 and about 20 miles southeast of the Black Rock Desert, where the annual Burning Man counterculture festival is held.

"It's remote, and it's rocky," Nevada Department of Wildlife spokesman Chris Healy said. "There are good dirt roads into the place, but they are dirt roads, and it is cold and snow so it's not ideal."

"So it's not the kind of area where there would be nobody around," he said Monday. "But most chukar hunters are smart enough not to go out in the weather we have now."