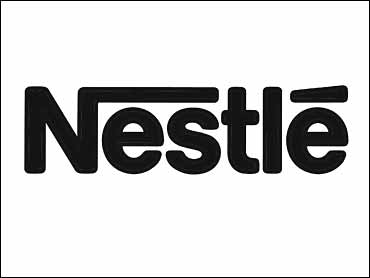 The news came as speculation builds that Nestle is a prospective buyer of Hershey Foods, the largest U.S. candy maker, in a deal that could be worth $10 billion.

"Chef America is an ideal and strategically important complement to our own frozen food activities in the United States," said Chief Executive Peter Brabeck.

The Denver-based Chef America, which is privately held, expects sales of $720 million in 2002, an increase of more than 15 percent on last year.

Chef America, which has manufacturing plants in Chatsworth, Calif., and Sterling, Ky., does not anticipate that the acquisition will affect its employees or operations, said spokeswoman Juanita Belle.

Nestle said the deal required regulatory approval but it hoped to complete the purchase within 60 days.

The purchase of Chef America is the fourth big takeover within a year for Nestle and is expected to push the company's net debt over $13.6 billion.

Analysts had mixed views over whether Nestle could manage the Hershey deal on top of its other purchases.

"The acquisition will delay the restoration of Nestle's financial profile, which is currently weak for the rating category," S&P analyst Vincent Allilaire said in a report.

"I believe the takeover of Hershey is a chance that you get only once in a lifetime and I believe Nestle could go for it," he said.

Patrick Hasenboehler, of Bank Sarasin in Zurich, said the purchase of Chef America was a better deal than a takeover of Hershey would be. Chef America is a market leader in its segment, and its operating margin of nearly 30 percent makes the purchase price very attractive.

Hershey has a relatively low top line growth, he added.

Analysts said Nestle also could be in the market for Adams, the chewing gum unit of Pfizer Inc.