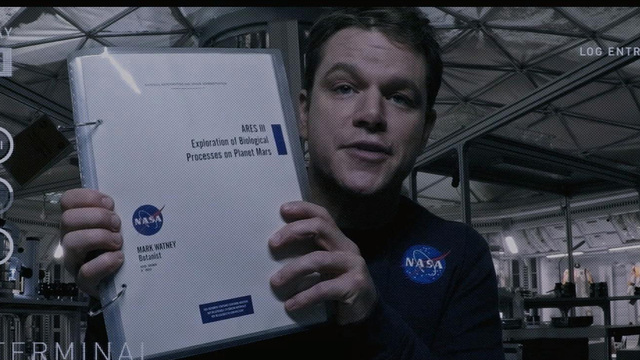 "The Martian" blasted off to the number one spot in the box office over the weekend, raking in $55 million dollars.

The movie stars Matt Damon as an astronaut who is stranded on Mars after his crew is hit by a sandstorm.

Astrophysicist Neil deGrasse Tyson, director of the Hayden Planetarium at the American Museum of Natural History, applauded the film for getting "enough of the science right."

"Couple of things you might not have noticed because it was subtle, but they were thinking deep," Tyson said on "CBS This Morning" Monday.

Tyson pointed out some of the subtle details the filmmakers got right, such as the slower pace at which items dropped to the ground in the film, reflecting lower gravity on Mars, which is only 40 percent that of earth.

Damon plays a chiseled, buff astronaut, who is able to lift a number of heavy tanks in the film. But Tyson said offered a disclaimer:

"You might think it's because he is physically fit, but if it's a 200-pound tank, it weighs 80 pounds on Mars."

These little things add authenticity, Tyson said, but he added that the film is not entirely without inaccuracies.

For instance, the deadly sandstorm that strands Damon on Mars would hardly be as terrifying in reality, according to Tyson.

"The Martian atmosphere is less than 1 percent the thickness of our atmosphere," he said, "and so when the wind kicks up, it doesn't pick up heavy things -- it can't and so it picks up only very light dust."

But Tyson added that a little exaggeration was understandably necessary to tell the story in a "fun" and "intriguing" way.

Tyson expressed excitement over NASA's announcement just days before the film's release of the discovery of flowing water on Mars. He said this would decrease Mars mission costs as NASA continues to "follow the water" in search of life.

"Even as an astrophysicist, I consider the search for life in the universe to be one of the greatest and highest goals in all branches of science," he said.