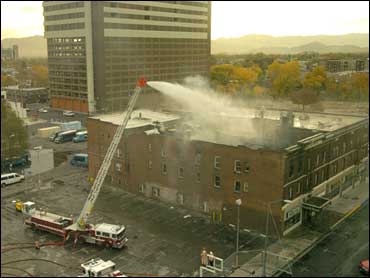 The suspect accused of arson and six counts of murder in a deadly fire at a historic downtown hotel was described by neighbors and hotel workers as a "nice woman" and "good tenant" who went to work regularly at her job as a cook at a nearby casino.

But they say Valerie Moore, 47, had been drinking and apparently flew into a rage Tuesday night after she quarreled with a fellow resident at the Mizpah Hotel before setting a mattress afire and starting the blaze that killed six and injured dozens.

"What appears happened, and this is what's under investigation at this time, is that there was a dispute," said fire chief Paul Wagner. Police Chief Michael Poehlman said officers were told it was an ongoing dispute between Moore and another resident.

"She didn't seem like a crazy person," said Maxie Birch, 42, who lived down the hall from Moore. "But something happened last night to push her over the edge. She just flipped. I don't know what caused her to flip," he told The Associated Press on Wednesday.

The description is reminiscent of her role in a 1987 killing that sent her to prison for more than 17 years for second-degree murder with the use of a deadly weapon.

Moore and two others were convicted in the beating and stomping death of Kathleen Kennedy, 32, an unemployed Reno waitress. Prosecutors had pressed for first-degree murder convictions at the time, arguing the killing was premeditated and deliberate.

Authorities said Kennedy was killed after arguing over money and refusing Moore's sexual advances. Prosecutors said Moore struck the woman in the head with a large rock, left her body in the street and went off to steal beer from a store.

Tuesday night's fire was Reno's deadliest since 1962, when six people died at the Golden Hotel, said fire department spokesman Steve Frady. He said the 84-year-old Mizpah building had smoke alarms but not sprinklers, which was allowed by city code because of the building's age.

About 30 people were injured, some of them after they leaped from windows at the three-story building, which was primarily a residential hotel. Authorities reported that two people were hospitalized in critical condition, and a third was flown to a burn center in California.

Steven Purcell, 53, the hotel's front desk clerk, said Moore asked him to escort her from a nearby liquor store to the hotel late Tuesday afternoon.

"She seemed lucid and in a good mood at the time," Purcell told AP. "But sometimes, she was erratic and irrational and possibly self-medicated."

"She just had way, way too much to drink yesterday, causing trouble all day," Steele said.

Birch, a cook at a Reno homeless shelter, said he told police that Moore set fire to a mattress that she leaned against his door. He said Moore became angry after police responded earlier in the night to an argument Moore had with an unidentified male hotel tenant.

Moore was drunk and her head was bleeding when she came to Birch's room to discuss the incident a first time, Birch said, adding he gave her support and a change of clothes.

But Birch said Moore set fire to the mattress after she returned to his room a short time later and he refused to open the door and talk to her because she was acting belligerently.

Moore's behavior was out of character, and she was friendly and sober when he saw her earlier in the day, Birch said.

"She didn't seem like the same kind of person," Birch said. "She was cussing me out and calling me all kinds of names. She tried to kill me for no reason."

Police said 60 to 80 people were inside the recently renovated hotel when the fire started. It quickly engulfed the north wing of the hotel, near Harrah's casino, though no downtown high-rise hotel-casinos were threatened.

Firefighters said they did not know of anyone still missing in the rubble, but they had yet to search some areas. The roof collapsed, and authorities said the building would have to be shored up.

The Mizpah was built in 1922 and added to the National Register of Historic Places in 1984. Fire officials said they did not know whether the building could be saved.

"It was just gorgeous, and now it's all gone," said Steele. "It's a brick building. I don't know why it burned so fast."