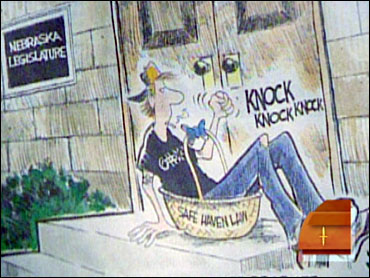 Every state now has a "safe haven" law allowing parents who can't care for a newborn to drop him or her off at a "safe haven," such as a hospital, firehouse or police station.

Nebraska's new statute allows parents to drop off kids of ANY age up to 17.

And sure enough, Kauffman says, this past weekend, a 13-year-old girl was left at a hospital. Earlier, 11 and 15-year-old boys were abandoned at hospitals, and a 12-year-old boy was dropped at a police station.

Neb. State Sen. Brad Ashford says he's "not surprised," but has no regrets about the law. "Quite frankly," he told Kauffman, "if the stress level gets to the point where something bad could happen, I'd rather have that child, whether it be ten years old four years old, (or even 15)... to me, the child is safe."

But, Kauffman points out, critics fear the floodgates are open. Kathy Bigsby Moore, of Voices for Children in Nebraska, calls the law a mistake, saying, "These are parents and caregivers who are saying, 'I can't handle this child by myself,' "leading to the child being placed in an "already overflowing" foster care system.

Kids who are dropped off are brought to an organization called Project Harmony for evaluation, Kauffman explains. Counselors say the biggest hurdle is convincing them that being abandoned isn't their fault.

But don't be so quick to blame the parents, cautions Connie Hammitt, whose 17-year-old daughter has had behavioral problems since she was 5.

"A lot of the focus has been on the cruelty, the aspect that the child is going through abandonment," Kauffman remarked to Hammitt, who immediately responded, "Walk a mile in my shoes, and then you would have the right to say that to me!"

"Were there times," Kauffman asked Hammitt, "when you considered dropping off your child, if you could have, if the law had been in effect -- would you have done it?"

"I would say that, yes, I, as a parent, would drop her of," Hammitt replied.

Says Moore, "I have spent 30 years of my life trying to create systems ... that serve the best interests of children. And I don't think this safe haven law does that."

CBS News legal analyst Lisa Bloom told co-anchor Julie Chen in New York Tuesday she thinks the law is "a good thing. I represented abused children for about ten years in my law practice. Anything that protects children from being abused or neglected, I'm in favor of.

"I think it's time to tighten up that law a little bit, so that not just any child can be dropped off at a hospital for virtually any reason, which is what we're seeing.

What about those concerns about sending the kids into the overburdened foster care network?

"Maybe we should come up with an alternative, then," replied Bloom. "What's interesting about this approach is, parents can drop off teens or adolescents for a day, or a week, and then reclaim them. Usually, foster care proceedings are instituted involuntarily against a parent -- a parent doesn't want to let go of that child and forced to give up that child -- but what about a parent who simply says, very honestly, 'I can't control my kid. I don't have the skills, I don't have the resources to deal with it'? I think what we're seeing in this story is a real wake-up call that we don't provide much help for parents like that, and maybe it's time we did."

Are there alternatives for parents who are having problems with their teenagers at home?

"There are," Bloom says, "but it's very difficult. A parent could institute a relinquishment proceeding. But that could take a lot of weeks or even months, a lot of expensive legal bills. Most parents aren't capable of doing that. Parents have to turn to family members, friends, to take an out-of-control teen, but a lot of parents don't have that option available."