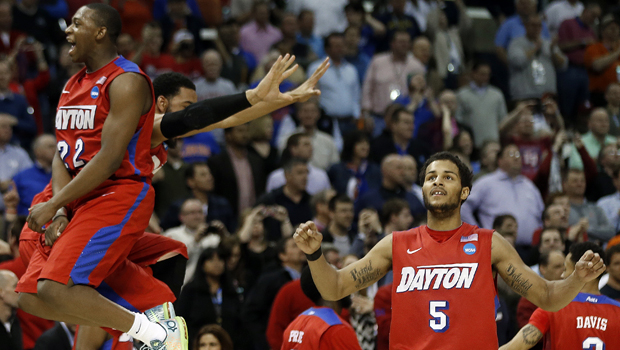 MEMPHIS, Tenn. -- The Dayton Flyers are feeling very confident and loose with the upsets they've already pulled this NCAA tournament. They're also ready to wreck what's left of anyone's bracket with their greatest challenge ahead and a trip to the Final Four on the line.

While the 11th-seeded Flyers already have exceeded expectations going into Saturday's South Regional final, the Gators are driven too. They talk of chasing greatness, trying to add to a 29-game winning streak that's the best in school history. Florida also is back in the Elite Eight having lost here the past three years.

"We're just very blessed and fortunate to be a team that can put themselves in this opportunity to play for a Final Four again," Florida senior Patric Young said Friday. "Going to prepare and do the best we can, especially as a senior class, because it's our last go-round to make it to that next step."

The Gators ended their past three seasons ended by Butler in overtime, Louisville and Michigan. Young said the Gators have learned lessons from each of those regional final losses from not finishing a game when they had a lead or not coming out ready like a year ago when Michigan routed them 79-59.

"We're going to do the best we can and make sure we go out there leaving no regrets," Young said.

Coach Billy Donovan, who won his 450th career game at Florida when the Gators downed UCLA on Thursday night, said this team is so very different from each of the past three. Donovan noted he had to replace three starters in Mike Rosario, Kenny Boynton and Erik Murphy from last year's team alone.

But every loss to end a season hurts, and Donovan isn't ready to separate one from another.

"I can tell you it was just as painful in 2000 walking off the court losing the national championship game as it was losing last year in the Elite Eight," Donovan said. "So I don't know if there's any easy way because I think everybody this time of year is putting their heart and soul."

Florida (35-2) hasn't lost since Dec. 2 at UConn, and the Gators' win over UCLA matched the school record for most wins in a season set by the 2007 national championship squad. Their string of Elite Eights is even more impressive considering no other team has even made four straight Sweet 16s in the same span.

Dayton coach Archie Miller was asked if he has quizzed brother Sean for tips on Florida's press considering Arizona played the Gators last season. Miller said his brother's too busy and they're not talking anyway right now. But the Dayton coach has seen the Gators plenty on TV.

"You understand kind of their pedigree right now," Miller said. "They're the number 1 overall seed for a reason. They've won 29 games in a row. I don't know who can help me, to be honest with you."

Miller will counter Florida's experience and winning tradition with his very deep bench. Dayton (26-10) played 12 Flyers in beating Stanford 82-72 in the semifinal, and they aren't worried about seeding at this point of a tournament where they've already knocked off Ohio State followed by Syracuse in the opening weekend.

"It made us think we can play against anybody in the country," Dayton guard Jordan Sibert said. "It's just our nature to know we can go out there and compete for 40 minutes. At the end of the game, we'll be right there to win it."

Donovan has been impressed by the Flyers' unselfish approach with any of 12 scholarship players capable of scoring double figures in any given game.

Defense likely will be the key. Florida ranks third nationally in scoring defense, allowing 57.8 points a game. The Gators haven't allowed more than 68 points in a game over the past 10 games. Dayton is pretty stingy too, allowing only two opponents to top 70 or more in its past seven games.

With plenty of Gators' fans setting their sights on the Final Four in Texas, Dayton could wind up with a home-court advantage at the FedExForum. Miller said he had heard Flyers' fans already have taken over downtown Memphis with the raucous campus celebration relocating to Tennessee.

The Gators are ready to tune them out, though they did have Tim Tebow cheering them Thursday night.

"We've been able to handle that all year long," Young said.