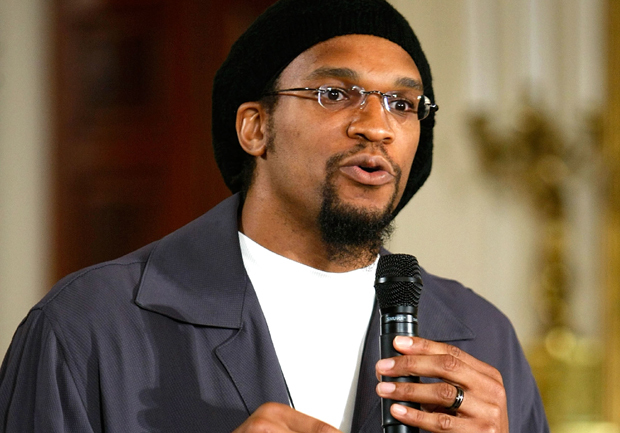 In the prime of his NBA career, Etan Thomas did his best to stay connected to his young children. When he found himself on grueling six-game road trips, Thomas would rely on Skype and phone calls from his wife Nichole, who would videotape the exploits of their kids.

But Thomas, a 6'10" center who retired after the 2011 season, admits he missed out on milestones in his children's lives, like his son Malcolm's first steps. And as the years passed, the pangs of separation were more palpable.

"When you're young and traveling, it's fun, but once (your children) get a little older, they can verbalize that they miss you," said the 35-year-old NBA veteran. "It's completely different."

Thomas, who has three children (7-year-old Malcolm and daughters Imani, 5, and Sierra, 2), said many of his NBA colleagues felt the same guilt. The sting was exacerbated by stereotypes that athletes are absentee dads who don't take fatherhood seriously.

"You always hear people being beaten up for not being good fathers," Thomas said. "I wanted to do something that inspired people."

Last year, Thomas released "Fatherhood: Rising to The Ultimate Challenge," a book that features essays from high-profile dads from all walks of life - athletes and actors, politicians and poets. He has since turned the book into what he calls a "fatherhood movement" - holding nationwide panels that connect many of the books' contributors with fathers and kids.

Thomas has taken his message to schools, churches and correctional facilities from Chicago to Tulsa. For the book and tour, he has teamed up with a wide array of famous dads: from NBA star Chris Paul and filmmaker Michael Moore to skateboard legend Tony Hawk and rapper-turned-actor Ice Cube.

"When you hear it from people that you watch on the court, on the field or in music, it really resonates with young men," Thomas said.

Each contributor offers a different perspective about being a dad - and in some cases, growing up without a father around. Thomas is aware that 24 million children grow up in households without fathers and the perception that many kids from broken homes end up incarcerated or dead. But he's no fan of statistics or stereotype.

"I don't care what the stats say," Thomas said. "Listen to these men who have beaten the odds."

In the book, NBA superstar Kevin Durant recounts a rocky relationship with his dad, saying "I would see my father once a month, if I was lucky." Actor Isaiah Washington candidly talks about feeling conflicted about an abusive father who was essentially a "stranger" to him, writing: "How can I have this deep attachment to someone who has never been there for me?"

Thomas, whose parents were divorced when he was little, says he had a relationship with his father but he wasn't a regular presence in the home. "I could relate to people who didn't have enough of their father," he said.

Thomas was asked to join forces with another high-profile dad who grew up without his father -the president of the United States. Since 2009, the former NBA center has been leading town hall meetings as part of President Obama's Fatherhood Initiative. Thomas said Mr. Obama's willingness to talk about his own insecurities growing up in a single-parent household is invaluable to young people.

Regret is a common theme among some of the high-profile dads who collaborated with Thomas. Former Vermont Gov. and DNC chairman Howard Dean writes about making an extra effort to spend time with his kids but concedes he wishes he "had sometimes been even more patient." Rapper Taliban Kweli talks about missing the birth of his daughter in New York because he was performing in Baltimore, calling it a "lesson in prioritizing for me."

While Thomas and his celebrity collaborators share different fatherhood perspectives, their children often face similar challenges, according to one expert.

"Celebrityhood can be a blessing and a curse for the offspring," said Danielle Knafo, a clinical psychologist who has studied the lives of children of famous people.

On the one hand, children of famous people generally are living more privileged lives and afforded more opportunities than other kids, Knafo said.

However, high-profile figures are often not involved in the everyday lives of their children and it's often more difficult for their kids to develop their own sense of identity, she said. Children of famous parents also may have a skewed sense of success.

"They don't see that the parent had to struggle before they became famous so they have this unrealistic notion of what it means to make it," she said.

Knafo said the most important thing for famous dads to do is take have an open relationship with their kids.

"Quality time with the child, that's the most important thing," Knafo said. "Pay attention to who that child is in their own right; don't just say 'look what daddy's doing.'"

As for Thomas, he may have been away from home when Malcolm took his first steps, but he hasn't missed much since. After undergoing heart surgery in 2008, he was forced out of action for a full season. The surgery derailed his NBA career, but it jumps-tarted his involvement as a dad, since he was confined to his home during the recovery. "My son was real young then and we bonded on a whole other level," Thomas said.

These days, Malcolm is becoming increasingly curious about the world, a development that is testing Thomas' parenting decisions. In a column for the Washington Post, Thomas recounted a February weekend when Malcolm - who is not allowed to watch the news - caught a glimpse of CNN when his dad stepped out of the room.

Among Malcolm's barrage of questions to his father: "I thought you said all of this kind of stuff happened a long time ago when TV was in black and white?"

Thomas said it was too early to discuss the nuances of race and the realities of growing up black in America with his young son. He said he would soon have to "take away" Malcolm's innocence in that regard, but in the end, he is grateful for the relentless questions from his children.

"You want to teach them and illustrate and watch them," he said. "It's a fun process. I'm constantly learning."