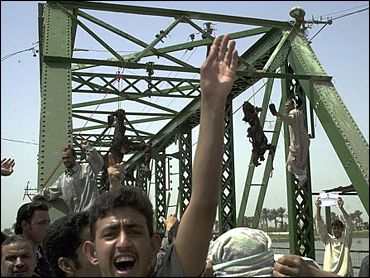 (AP)
Photo: Iraqis chant as American contractors hang from a bridge in Fallujah, Iraq on March 31, 2004.

NEW YORK (CBS) - Three members of the elite Navy SEALs, who were hailed as heroes for capturing one of Iraq's most wanted alleged terrorists, are now being court martialed for roughing him up, according to Fox News.

The detainee claims he was punched during the operation and suffered a bloody lip, reports Fox. 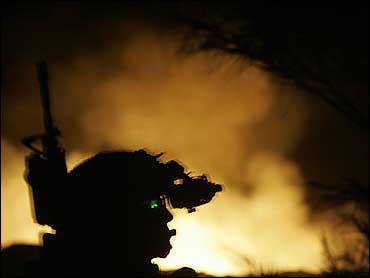 (PATRICK BAZ/AFP/Getty Images)
The network said the complaint was made by Ahmed Hashim Abedm, the alleged mastermind of the gruesome 2004 murder and mutilation of four American contractors in Fallujah. The four worked in the security division of Blackwater USA. The bodies of two were hung from a bridge over the Euphrates River.

Abedm, whose military code name was "Objective Amber," had evaded capture until September.

He made the accusation when he was in the hands of Iraqi authorities. Abedm has since returned to American custody, reports Fox, and his allegations led to a military investigation.

They have refused non-judicial punishment — called an admiral's mast — and have requested a trial by court-martial, according to the network.

The three will be arraigned on December 7 in separate hearings.

SEAL commandos are members of the elite special forces unit for the US Navy who are trained for unconventional warfare on sea, air, and land.

The four murdered Blackwater agents were transporting supplies for a catering company in 2004 when they were caught in an ambush and killed by gunfire. Their bodies were then burned and dragged through the area. The attack sparked international outrage when photos of the mutilated victims hanging from a bridge were televised.

A spokeswoman for US Central Command confirmed to Fox News that "three SEALs have been charged in connection with the capture of a detainee" and that "their court martial is scheduled for January."

According to Fox, one of the commandos submitted a handwritten statement to investigators. In it, he described the mission, and the events after Abed's capture.

He says that he had showered, went to the kitchen, and later looked in on the detainee.

"I gave the detainee a glance over and then left," the SEAL wrote. "I did not notice anything wrong with the detainee and he appeared in good health."