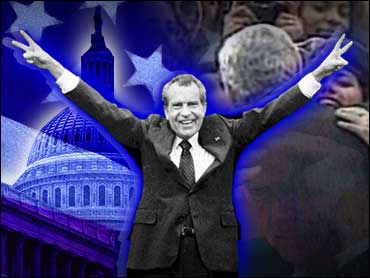 (AP / CBS)
The National Archives today added another heap of about 90,000 pages of documents to the mountain of paper from the Nixon administration. With it, some 200 hours of tape shine additional light on Richard Nixon's presidency.

Sound dry? It isn't. Our justice and homeland security correspondent, Bob Orr, has a great piece on tonight's Evening News with highlights, including what Henry Kissinger said to the president after the notorious 1972 "Christmas Bombing" of Hanoi, and what Nixon did to portraits of former presidents in his offices.

You can see a selection of the paper documents here, but most are only in libraries. The library is working on putting the tapes online, and quite a few already are.

Listen to them here.

Despite that Nixon conducted much business in great secrecy and earned a reputation for being a behind-closed-doors president, he allowed most of his steps to be chronicled. It had been customary for presidents to record meetings and phone conversations, though it's not even clear if the practice is still followed.

One thing's for sure: nowadays, e-mail and electronic documents are the big challenge for the National Archives. And, as President Bush leaves office on Jan. 20, 2009, the NARA expects to be handed some 140TB of from his administration – roughly 20TB of e-mail – which is more than 50 times what it received from the Clinton years. Will it be overrun by such a glut of data? Computerworld tackles the issue, via Slashdot.