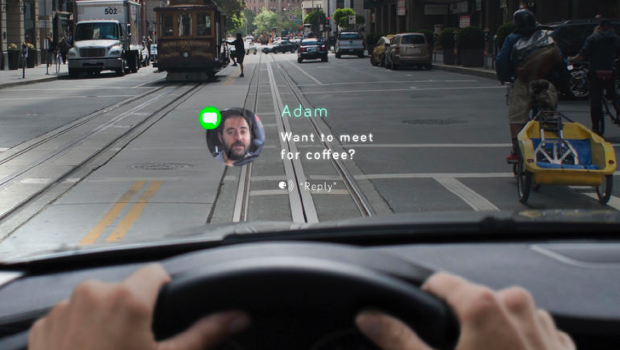 Automakers increasingly rely on LCDs to show maps, turn-by-turn directions, phone, and stereo information, but it's a solution that invariably diverts a driver's eyes from the road. San Francisco start-up Navdy offers a different solution, an aftermarket head-up display (HUD) that projects a wide range of information in the driver's view, and offers gesture control.

Navdy, the name of the device and the company, sits on a car's dashboard in front of the driver. It projects imagery on a transparent screen that sticks up a few inches from the device. Dropping your view a bit, you can see the full-color graphics as if they are floating over the road. Chief technology officer Karl Guttag, who has extensive experience working with micro-displays, developed the projection technology for Navdy. Rather than a simple projection on a transparent plane, Navdy successfully makes its imagery appear out in front of the car, reducing cognitive dissonance for the driver.

Although the projected display is a key part of Navdy, the company takes it further by including a CPU running Android in the unit. This computing platform lets Navdy run a wide array of apps, including navigation. However, the company will maintain control over approval, only allowing apps it deems safe for the car.

More useful to the average driver, Navdy will offer an app that integrates a driver's iPhone or Android with the HUD. Navdy projects turn-by-turn directions, computed by navigation on the phone, in front of the driver. When a phone call comes in, Navdy shows the contact information. And drivers can see what music is currently playing.

Navdy offers a number of control features, as well. A camera mounted in the unit takes gesture control information from the driver. Swiping your hand to the left answers an incoming phone call, as one example. To avoid having Navdy react to random gestures, its recognition is context-sensitive, only becoming active during a phone call or other gesture-controllable activities.

The device includes a microphone, which works as a pass-through for Google Voice and Siri when you have a phone paired to the unit. That feature lets you interact with your phone, starting navigation, phone calls, or music playback, without having to pick up the handset.

Developers will be able to design apps to run on Navdy, or include display outputs for Navdy in iOS or Android apps.

One advantage Navdy apps will have over phone apps is access to a car's OBD-II port. Navdy relies on the OBD-II port in a car, usually mounted under the dashboard on the driver side, for power. However, its OBD-II plug can also read data from the car's diagnostics system, letting developers incorporate fuel efficiency coaching, performance gauges, or a host of other automotive-specific features in a Navdy app. For example, a performance app could show a driver throttle position, gear, and power during a track-day session.

Navdy faces little competition when it hits the market. Garmin makes a head-up display, but it is monochrome and focused on navigation. A few automakers offer head-up displays as options, with BMW's being the most advanced. However, those are also limited in scope.

Following a crowdfunding model, Navdy began taking preorders on its website Tuesday, offering the first units for $299. The company is looking to raise $60,000 over its 30-day preorder offering to begin full production of the Navdy units. Once full production begins, Navdy will go on sale for $499 per unit.