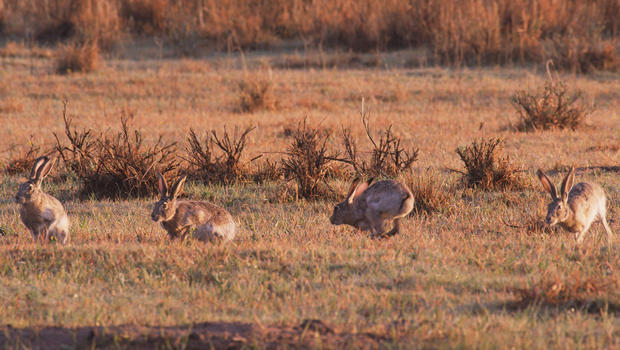 The origin of hares and/or bunnies bringing eggs to children at Easter time is not clearly understood. Perhaps they originated from tales of ancient gods who had hares as companions.

German Lutherans were the first to bring their "Easter Hare" folklore to this country in the 1700s. Prior to that time, a pagan festival, Ostara, had been held for eons in Germany. Ostara celebrated the goddess of spring, Eostre, who once turned a frozen bird into a rabbit.  Since that rabbit came from a bird, it made sense that it could lay eggs.

Just like Santa, the Easter Hare rewarded good children with presents the night before Easter, except that these presents were colored eggs and candy.

Before the Christian era, rabbits, hares and bird eggs were fertility symbols, all springing forth with abundant life at the Vernal Equinox. With the advent of Christianity, old practices were adapted to the new religion. For example, Orthodox Church members often gave up eggs for Lent, so they preserved eggs by boiling them, to be eaten at the end of Lent. In celebration of the season, eggs were dyed various symbolic colors; red represented life-giving blood, yellow referred to the moon, and blue for the skies and good health. [The idea of decorating eggs actually preceded Christianity, with Ukrainians and other Eastern European artists creating intricate designs with dyes and beeswax.]

Beyond their Easter traditions, bunnies bring a tremendous diversity to North America. The number of rabbit and hare species on the continent is about 15, each varying from the others depending upon the environmental stressors that affected their evolution. For example, jackrabbits, often found in grasslands where cover is minimal and coyotes are common, are adapted for running fast with tremendously strong, long legs. They can hit speeds approaching 45 miles per hour. Their big ears play a big role beyond just improved hearing; the blood vessels in those large ears can dilate as blood is pumped through, cooling as it circulates.

At the other end of the temperature spectrum, a lesser-known rabbit, the pika, has small ears, a compact body, and an almost nonexistent tail, allowing them to survive long, cold winters.

The swamp rabbit, the largest of the cottontails, is an unusual rabbit. It readily swims to avoid predators and moves from one piece of land to the next in its wet environment.

It has dense fur that essentially acts as waterproofing, keeping the animal from developing hypothermia in its aquatic environment. It can even live in the cane and dense grasses of brackish coastal marshes, swimming from one high spot to another.

One of the more specialized rabbits in North America is the snowshoe hare. To avoid predators its fur is white in the winter and brown in the summer -- seasonal camouflage! Another adaptation to elude predators is its tremendously wide feet, which have stiff hairs to more widely distribute their weight on snow. Snowshoe hares can be found in most of Canada and Alaska, along the Rocky, Appalachian, and Pacific Mountain ranges, and parts of several Northeastern states.

Biologists question the effects of climate change on snowshoe hares. Will increasing temperatures result in a shorter snow season, and will snowshoes be able to adapt? Penn State researchers have found snowshoe hares remaining brown all winter, meaning a species with a high reproductive potential, can evolve more quickly than one with a lower reproduction rate. Snowshoes may be able to adapt to a changing world temperature, while the little pika, with only one small litter a year, is more likely to go extinct.

The Automat: A look back at the future of dining