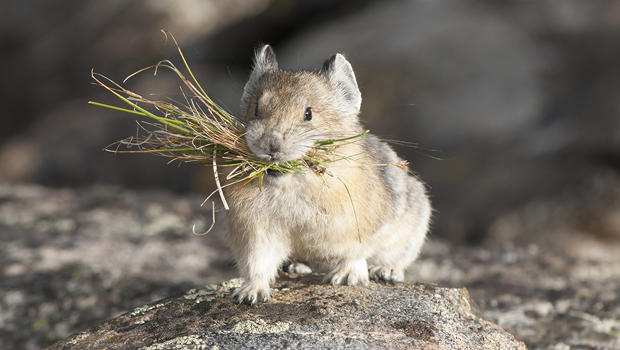 Pikas are the most adorable mammal on this earth. And yes, I am prejudiced. They are found only at higher elevations so many people haven't had a chance to see them. But luckily for me, I have.

I met my first pika on the top of Beartooth Pass in Montana. Beartooth Pass is along Beartooth Highway, the highway Charles Kuralt, the first host of CBS' "Sunday Morning," famously referred to as "the most beautiful drive in America."

Since our first meeting, I've spent hours, days, weeks filming them. Along the highest section of Trail Ridge Road in Rocky Mountain National Park I watched one inexplicably do a complete somersault like a circus acrobat, something I have never seen any animal do before, or since. It was so cute!

If you travel up a high mountain in Colorado you would find yourself moving through a variety of life zones. The first zone is the foothills exemplified by pines, aspens and wild rose, followed by the higher montane zone where very cold winters and high winds are common, as are Douglas fir and limber pine.

The subalpine region is characterized by spruce and subalpine fir. As the upper subalpine zone comes into view the trees are much smaller and deformed by the extreme cold and harsh winds. This boundary area is the krumholtz (from the German meaning twisted wood), where winter's harsh, freezing winds literally shape trees.

As you near the top of the mountain, the alpine zone comes into view, where only very short plants survive. It is an interesting area because many of the plants thriving at much lower elevations are here, too, but barely recognizable due to their diminutive size. Look around and you will see willows, heathers, dandelions, and many other familiar species. One notable exception to the alpine plant's small size is their flowers, which are the same size as their much lower elevation cousins. Evolution has dictated flowering plants must attract pollinators no matter where they live.

Most animals living in alpine environments respond to cold weather by either moving or hibernating. Pikas do neither. They stay under the insulating snow in deep rocky burrows and are very well-adapted to cold winters with extremely dense fur.

Pikas are small, short eared rabbits. Fierce winds during a winter storm can exceed 150 mph, and temperatures can drop to less than -50°F. Pikas survive harsh winters under thick, insulating snow for as many as nine months. How? Along with their adaptations to cold temperatures, they literally make hay while the sun shines.

In the late spring/early summer after the snow melts, they come out of their dens and spend most of each day collecting grasses and wildflowers. They eat some of their collected plants fresh, but most become part of their winter stores. Most of their short summer is spent collecting plants to create haystacks. Once a haystack is completed they start another.

They return to each stack a number of times to redistribute its contents making sure the whole stack dries. Recently researchers learned they also add a "pesticide" -- alpine avens, a plant with toxins which inhibit bacterial growth within the haystacks, thereby protecting their winter food from rotting.

The greatest threat to pikas is the loss of habitat brought on by climate change. They are literally trapped in many cases as they are already at the highest elevations. They can't survive further down the mountain, and they have already gone as high as they can. I've been a pika watcher for a long time. They are no longer found in several spots where they were common as little as three years ago.

One of the threats to pikas is hot summer days. They have no sweat glands, and don't tolerate temperatures much above 78°F. Pikas evolved in cold alpine tundra. Increasing temperatures cause stress by changing the plant species in alpine meadows, reducing alpine habitat and thinning insulating snow that protects them from winter temperatures. In fact, because climate change is currently producing less snow, that may be as detrimental to pikas as increasing summer temperatures.

Since they live at high altitudes, some good places to look for pikas are at higher elevations anywhere in western North America. You will improve your chances of finding them by moving slowly and listening for their "EEEP" call. I usually just sit on a rock and watch, waiting until I hear them. Your patience will be rewarded with a look at one of the tundra's most endearing animals. They have adapted somewhat to excessive summer temperatures by not harvesting hay in the hottest part of the day, so you should have better luck on overcast days in the morning or evening. Happy hunting!