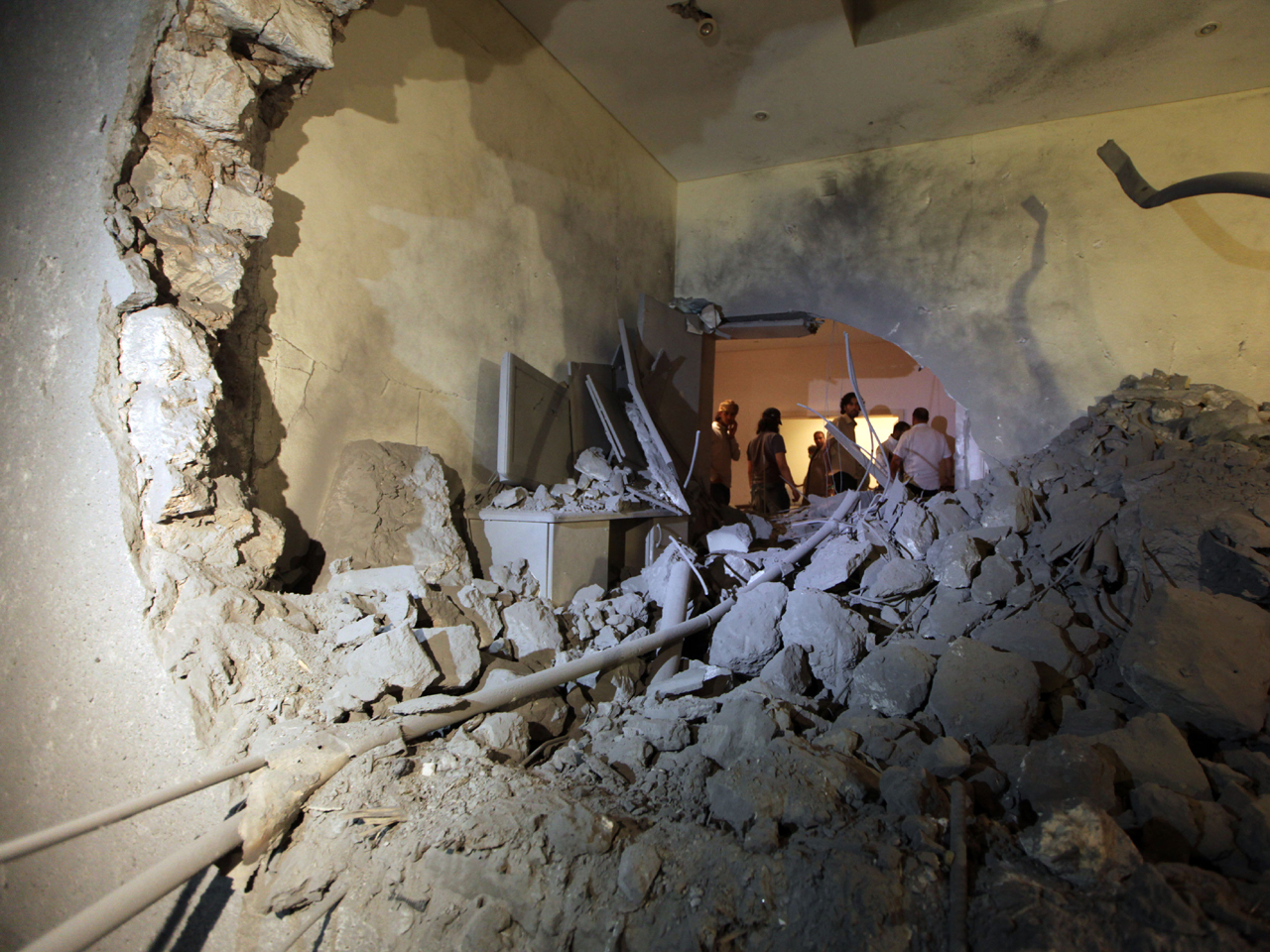 TRIPOLI, Libya - Libyan leader Muammar Qaddafi escaped a NATO missile strike in Tripoli on Saturday, but his youngest son and three grandchildren under the age of 12 were killed, a government spokesman said.

The strike, which came hours after Qaddafi called for a cease-fire and negotiations in what rebels called a publicity stunt, marked an escalation of international efforts to prevent the Libyan regime from regaining momentum.

Rebels honked horns and chanted "Allahu Akbar" or "God is great" while speeding through the western city of Misrata, which Qaddafi's forces have besieged and subjected to random shelling for two months, killing hundreds. Fireworks were set off in front of the central Hikma hospital, causing a brief panic that the light would draw fire from Qaddafi's forces.

The attack struck the house of Qaddafi's youngest son, Seif al-Arab, when the Libyan leader and his wife were inside. White House spokesman Shin Inouye declined to comment on the developments in Libya, referring questions to NATO.

The alliance acknowledged that it had struck a "command and control building in the Bab al-Azizya neighborhood" Saturday evening, but it could not confirm the death of Qaddafi's son and insisted all its targets are military in nature and linked to Qaddafi's systematic attacks on the population.

The commander of the NATO operation, Canadian Lt. Gen. Charles Bouchard, said he was aware of unconfirmed reports that some Qaddafi family members may have been killed and he regretted "all loss of life, specially the innocent civilians being harmed as a result of the ongoing conflict."

Seif al-Arab Qaddafi, 29, was the youngest son of Qaddafi and brother of the better known Seif al-Islam Qaddafi, who had been touted as a reformist before the uprising began in mid-February. The younger Qaddafi had spent much of his time in Germany in recent years.

Qaddafi's children had been increasingly engaged in covering up scandals fit for a "Libyan soap opera," including negative publicity from extravagant displays of wealth such as a million-dollar private concert by pop diva Beyonce, according to a batch of diplomatic cables released by the secret-spilling WikiLeaks website.

But Seif al-Arab remained largely in the shadows, although he had a penchant for fast cars and partying when outside Libya.

Muammar Qaddafi and his wife were in the Tripoli house of his 29-year-old son when it was hit by at least one bomb dropped from a NATO warplane, according to Libyan spokesman Moussa Ibrahim.

Ibrahim would not give the names of the three children killed, except to say they were nieces and nephews of Seif al-Arab and that they were younger than 12. He said they are not releasing the names yet to protect the privacy of the family.

He said the compound that was hit was in the Garghour neighborhood.

"It seems there was intelligence that was leaked. They knew about something. They expected him for some reason. But the target was very clear, very, very clear. And the neighborhood, yes of course, because the leader family has a place there, you could expect of course it would be guarded, but it is a normal neighborhood. Normal Libyans live there," he said.

NATO warplanes have been carrying out airstrikes in Libya for the past month as part of a U.N. mandate to protect Libyan civilians. Saturday's strike marked the first time Qaddafi's family was being targeted directly.

Armed rebels have been battling Qaddafi loyalists for more than two months in an attempt to oust Libya's ruler of nearly 42 years. Standing outside an improvised triage unit in a tent in the parking lot, rebel fighter Abdel-Aziz Bilhaj, 22, welcomed the attack, saying it would make Qaddafi think twice about how he dealt with his people.

"It could make him more willing to back down on certain parts of his plan," Bilhaj said.

Medic Abdel-Monem Ibsheir considered the strike a form of justice.

"Qaddafi was not far away, meaning he's not safe," he said as occasional explosions could be heard throughout the city. "It's just like our children getting hit here. Now his children are getting hit there."

Eleven dead had reached the hospital morgue by midnight, including two brothers, ages 11 and 16. Two more had arrived by 1:30 a.m., and four more at another hospital.

On Tuesday, British Defense Minister Liam Fox and U.S. Defense Secretary Robert Gates told reporters at the Pentagon that NATO planes were not targeting Qaddafi specifically but would continue to attack his command centers.

Ibrahim said Seif al-Arab had studied at a German university but had not yet completed his studies.

Seif al-Arab "was playing and talking with his father and mother and his nieces and nephews and other visitors when he was attacked for no crimes committed," Ibrahim said.

Journalists taken to the walled complex of one-story buildings in a residential Tripoli neighborhood saw heavy bomb damage. The blast had torn down the ceiling of one building and left a huge pile of rubble and twisted metal on the ground.

Dust and smoke rose from the rubble, which included household items including smashed toilet bowls, bathroom sinks and furniture among the broken walls and demolished floors. The mirror of a dressing table remained intact in the middle of a bedroom although the walls around it were demolished.

The government spokesman said the airstrike was an attempt to "assassinate the leader of this country," which he said violated international law.

Heavy bursts of gunfire were heard in Tripoli after the attack.

Qaddafi had seven sons and one daughter. The Libyan leader also had an adopted daughter who was killed in a 1986 U.S. airstrike on his Bab al-Aziziya residential compound, which was retaliation for the bombing attack on a German disco in which two U.S. servicemen were killed. The U.S. at the time blamed Libya for the disco blast.

The fatal airstrike came just hours after Qaddafi called for a mutual cease-fire and negotiations with NATO powers to end a six-week bombing campaign.

In a rambling pre-dawn speech Saturday, Qaddafi said "the door to peace is open."

"You are the aggressors. We will negotiate with you. Come, France, Italy, U.K., America, come to negotiate with us. Why are you attacking us?" he asked.

He also railed against foreign intervention, saying Libyans have the right to choose their own political system, but not under the threat of NATO bombings.

In Brussels, a NATO official said before Saturday's fatal strike that the alliance needed "to see not words but actions," and vowed the alliance would keep up the pressure until the U.N. Security Council mandate on Libya is fulfilled. NATO has promised to continue operations until all attacks and threats against civilians have ceased, all of Qaddafi's forces have returned to bases and full humanitarian access is granted.

Rebel leaders have said they will only lay down their arms and begin talks after Qaddafi and his sons step aside. Qaddafi has repeatedly refused to resign.

"We don't believe that there is a solution that includes him or any member of his family. So it is well past any discussions. The only solution is for him to depart," rebel spokesman Jalal al-Galal said.