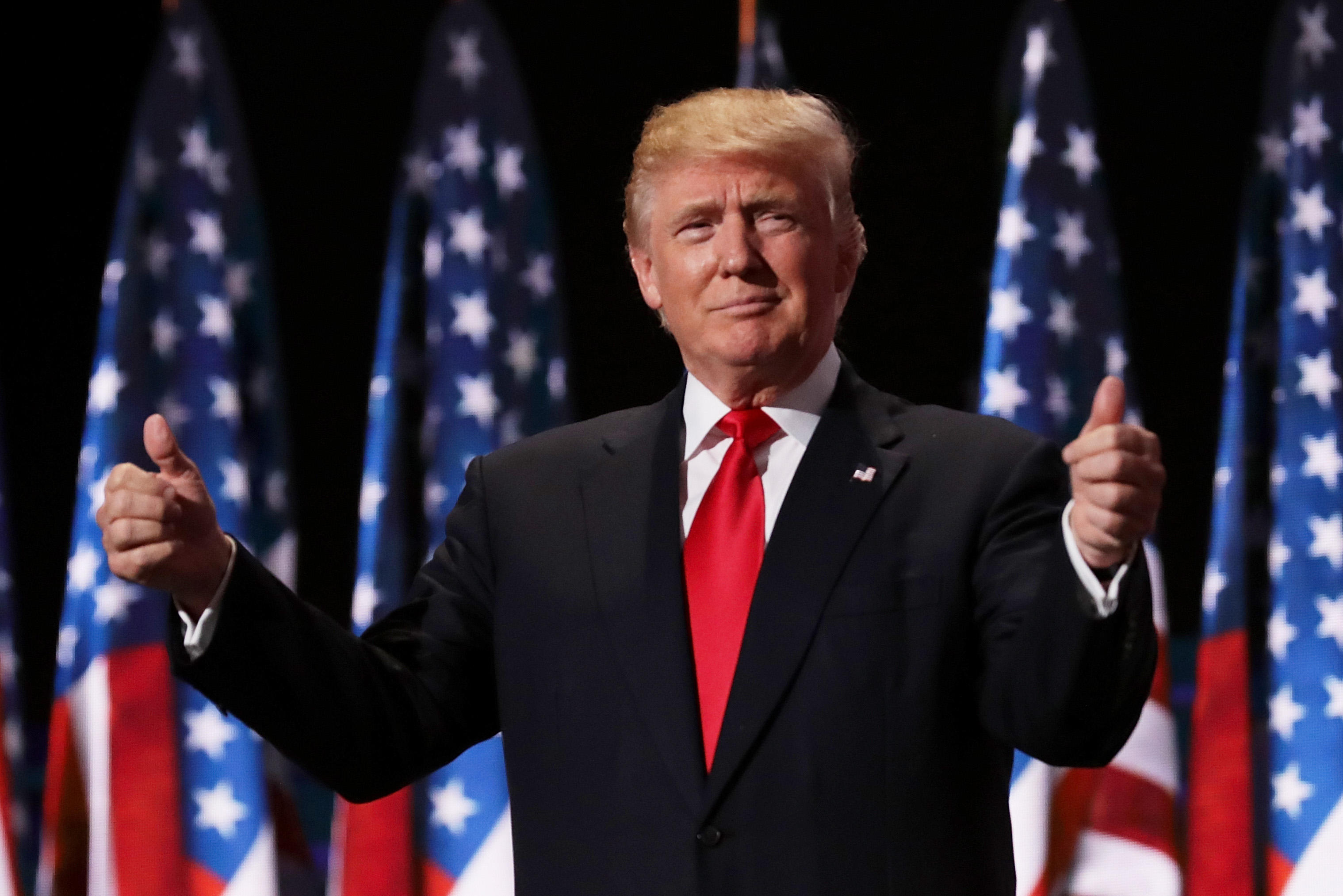 The ranks of President Trump's strongest backers are a bit smaller today than when we last checked in with the Nation Tracker, as the weight of the FBI investigation appears to be taking a toll, and Americans' optimism and confidence in his presidency have slipped.

Meanwhile, the ranks of his most ardent detractors have grown, as some who once said they were willing to give him a chance, or supported him conditionally, count themselves as opponents today.

Those who do remain firmly behind the president today say it's partly because he is under fire, believing that Mr. Trump needs their support fighting "the establishment" now more than ever, and agreeing that he is indeed the subject of a political witch hunt and unfair coverage. The vast majority of these supporters take this recent round of controversy very personally. When people criticize Mr. Trump, they say, critics are also knocking "people like me" who support him, too.

His opponents -- the staunchest of which have grown from 36 percent of the country to 40 percent -- pick descriptions of the president like "impulsive" and, increasingly, "temperamental." They see a president whose missteps are of his own making, not politics. Yet even his most fervent opponents lament, to some degree, having a president tied up in controversy: that isn't their preferred way to halt his agenda. They'd mostly still prefer to have one who would reach out and compromise.

Overall, just 37 percent of Americans approve of how Mr. Trump has handled matters involving the FBI investigation thus far, two-thirds do care about the issue at least some, and 60 percent say former FBI Director Comey should not have been fired. And 63 percent say there should be a special prosecutor. These numbers are all highly related to whether Americans support the president or not.

On the whole, 85 percent of Americans do believe that the president discussed the FBI investigation in private meetings with Comey in some fashion, though fewer (48 percent) think he actively tried to stop the probe. The rest think he just mentioned it without trying to impede it. In either case, 79 percent of Americans believe that if there are tapes of those conversations, those ought to be turned over, and the feeling is similar about any possible memos, with 75 percent feeling Congress ought to see those if they exist. On those latter topics, supporters and opponents largely agree.

If it is revealed that he did try to stop the FBI investigation, most Americans see that as a disqualification from office (58 percent) but unsurprisingly, those views are strongly tied to current support. In all, 79 percent of his backers, and 86 percent of his strongest supporters, say that wouldn't be serious enough to disqualify him.

In fact, half of his strongest backers believe the president ought to have power to stop the investigation if he wants to.

There are deep divisions over the implications of sharing intelligence with Russia. The president's supporters are more inclined to call this "smart," not because they all see Russia is a friend but because they see Russia as also fighting terrorism, consistent with the president's arguments. If not, they label it harmless. His opponents label this a dangerous breach of security -- and "dangerous" is a word 59 percent of the nation also uses to describe Mr. Trump's actions as president, overall.

Most Americans describe a president wrestling with problems of his own making -- more than half (51 percent) say his own missteps are the reason for the issues that have arisen, versus 40 percent who say it is driven by politics. But politically motivated actions are certainly what his supporters see.

The believers: Strongly behind the president -- and it's personal

In the Nation Tracker, we've been following Americans in terms of their support for the president and what policies they want. Out of all his backers, we've been labeling the strongest segment the "believers," and today they compose just 19 percent of the country, down from a high of 22 percent in February and 21 percent in March. Panelists for this study were re-interviewed, and we find that nearly one in five who used to be "believers" this winter have now become "conditional" supporters today (though they are still supporters). That's higher than the rate of conditional supporters who, feeling the president is unfairly under fire, became stronger supporters.

They're holding firm for a president that 89 percent of them feel is facing more resistance from "the establishment" than his predecessors. More than three-quarters of them see political motivations behind the recent controversies and more than eight in 10 believe the president is subject to unfair coverage. They support him not only because they feel he needs their support now against the "establishment" but also because eight in ten feel he speaks for people like them, and that he "respects the working class" in ways others do not. (They do demographically tend to be the kinds of voters who helped swing the election for him, non-college graduates with relatively lower incomes.)

The believers differ attitudinally from other groups today in important ways. They're the most likely to say Mr. Trump should have more power, in general, and most would prefer congressional Republicans to follow his lead. A majority -- 55 percent -- of them believe government and law enforcement officials should take an oath of loyalty to the Constitution and president, while 34 percent say the Constitution alone. Nine in 10 believe Comey should have been fired. But they do see a role for congressional oversight on matters of national security.

Conditional supporters, another 22 percent of the country, have always been more transactional, looking for the president to deliver and largely on economic policy, and they still are; they still see him -- more than many other qualities -- as able to apply business skills to government.

But they don't subscribe to the Mr. Trump vs. the establishment narrative at the same rate as believers, and are much more skeptical of the president. In the face of controversy, this is a group that still sides with him but is still looking for an agenda to be enacted, and is much more nervous about the state of things than believers are. Optimism has dropped precipitously for them, to 47 percent today from 66 percent in March. Four in 10 think these controversies could stop the agenda.

They're different from believers in how they feel about the source of the controversies: they're less likely than believers to call the investigation into Russia ties a "witch hunt" as 56 percent of them do compared to 81 percent of the former; they're less likely to blame the media coverage (though many still do) and relatively more likely to blame what they see as Trump's own mis-steps. And -- this could end up being politically important – they're far less likely to think the Republicans in Congress should do what Mr. Trump wants.

However most of them still don't see a need for a Special Prosecutor and very few of them think the President tried to stop the FBI investigation.

The curious: Wishing for outreach, getting controversy

This is a group that doesn't support the president today but would consider doing so. But even the "curious" seem to be becoming less so. Their numbers are a bit smaller now, down to 19 percent of the country from 21 percent in March. Notably, we saw the relatively largest transfer of people out of this group than any of the others on re-interviewing, as many are no longer looking for a reason to support the president, shifting away from "curious" to now calling themselves strong opponents, period.

Those who remain seem to express some disconnect between a president they think could do well -- they still have relatively higher confidence in his ability to bring business skills to government, compared to resisters -- and what they're observing of late. To them, these controversies look like big obstacles, with two-thirds believing this will thwart his agenda. That's not necessarily what they wanted: one of the defining differences is that they are not motivated to oppose him, and by four-to-one they'd prefer a president making deals instead of caught up in controversy.

But, they report that he does make them feel nervous and they're pessimistic about his presidency -- 89 percent of them say he does not show good judgment, a criticism they share with resisters. They are also far more likely to urge oversight from Congress and to look for constraints on presidential power.

They overwhelmingly disapprove of how he is handling the FBI investigation and the Russia allegations but they don't claim to care as much about it as resisters do. They do mainly call the investigation a critical matter, though, and three-quarters of them think it would be serious enough to disqualify him from office if the president is found to have impeded the investigation. Like resisters, they urge the Republican Congress to push back on Trump, not do what he wants.

The resisters: Growing in number

At 40 percent, resisters – people who are strong against Trump, period – are the largest segment of the country. Across the board, they express the most negative attitudes toward Mr. Trump and his administration's recent actions. Resisters express nervousness and pessimism, also describing Trump as dangerous, impulsive, and temperamental. Nearly all (99 percent) disapprove of his handling of the Russia investigation, and more than eight in 10 say the investigation is a critical matter of national security. They suspect that Mr. Trump tried to stop the FBI from investigating him, an act that nine in 10 feel would disqualify him from office. And they overwhelming favor congressional oversight and placing more limits on the president's power.

There has been an uptick in the number of resisters since March, driven mostly by people who were formerly curious. People who changed from curious to resister are more pessimistic than people who remain curious. These new resisters are also much less confident in Trump's abilities and his telling the truth, and more concerned about alleged ties between Trump and Russia and critical of Trump's handling of the FBI investigation.

One place the curious and resisters tend to agree is that they would mostly like to see Mr. Trump make deals with Democrats and compromise with opponents to get things done. Resisters, most of whom are Democrats, are also more likely to say that Democratic control of Congress would provide a needed check on President Trump, rather than gridlock or bad policies.

On that political front, if Democrats are looking to run as a check on the president in 2018, that case hasn't been made with a majority yet: among all Americans, as among registered voters, half think it would be better with them in control of Congress, and half just think it would bring gridlock.