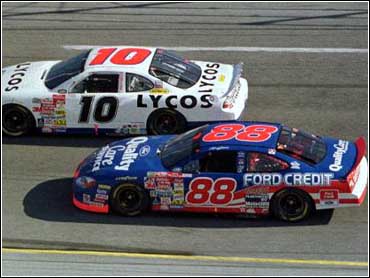 NASCAR has heard the complaints and will head to the wind tunnel to test its cars.

The decision comes with General Motors teams griping and the Daytona 500 producing only four on-track passes for the lead in 200 laps.

Even before Dale Jarrett led a top-five sweep by Ford on Sunday, the Chevrolet and Pontiac teams contended that the aerodynamics leave them at a disadvantage.

NASCAR measured horsepower on six cars after the race, then impounded three of them. Jarrett's Taurus, the Grand Prix of eighth-place finisher Ward Burton and the Monte Carlo of 16th-place Mike Skinner will go to the wind tunnel.

"Availability is the key," Triplett said. "We're not quite sure when it will happen."

Although Sunday's race had good moments, including Jarrett's dramatic pass on Johnny Benson to take the lead four laps from the end, the 190,000 fans spent most of the day sunbathing and yawning.

Whether it was the complaints from competitors or the evidence on the track, NASCAR knew something had to be done.

Asked if the wind tunnel tests could lead to a rule change before Friday, when practice begins for the race in Rockingham, N.C., Triplett said: "I think it would be a little quick to do something before Thursday. I think it's still possible, but I don't think right now it's probable."

The following two races are in Las Vegas and Atlanta and Triplett thinks it's possible changes could be in place by then.

"But Daytona's a different animal than anything else we do, other than Talladega," he said.

Daytona and Talladega, NASCAR's longest and fastest ovals, are the only tracks where a carburetor restrictor plate slows the stock cars. The teams build special engines and cars for those races.

Typically, the restrictor plate races are wild shootouts, with passing from start to finish and, usually, at least one big wreck. With a combination of redesigned cars and a new shock absorber rule that limits what the teams can do to the shocks and springs, Sunday's race was anything but wild.

"From a driver's standpoint, it's a lot easier racing because we're not threewide, side-by-side all the time," Jarrett said Monday.

"But we understand that these fans pay to see that kind of racing. I think there's some things we can do with these cars to make them better. We've got this sport o the highest level right now and we don't need to take away from that."

The defending series champion led a race-high 89 laps. But he said his third Daytona 500 victory wasn't as easy as it looked.

"It was just difficult to pass the leader," Jarrett said. "That was the main thing. You had to kind of stay in line. When I was running second behind Mark (Martin) and even behind Benson I was having a hard time trying to make a move."

Triplett pointed out that behind the leaders the race was very competitive.

"First through fifth had a difficult time getting around each other," he said. "What the difference was from sixth back we don't know. But once you got further back, there were guys passing all over the place."

Jarrett's car was put into Daytona USA, a display outside the main gate at Daytona International Speedway. The team must give up the winning car for a year in exchange for $100,000.

But Triplett said the No. 88 car still will be taken to the wind tunnel. The car will be returned to the display in the exact condition as it won the race.

This is the same car that won at Talladega in the fall of 1998, won at Daytona last July and finished second in both Talladega races in 1999.

"I know you can build more cars," said Todd Parrott, Jarrett's crew chief. "But it's hard to come up with race cars that drive like that one does."