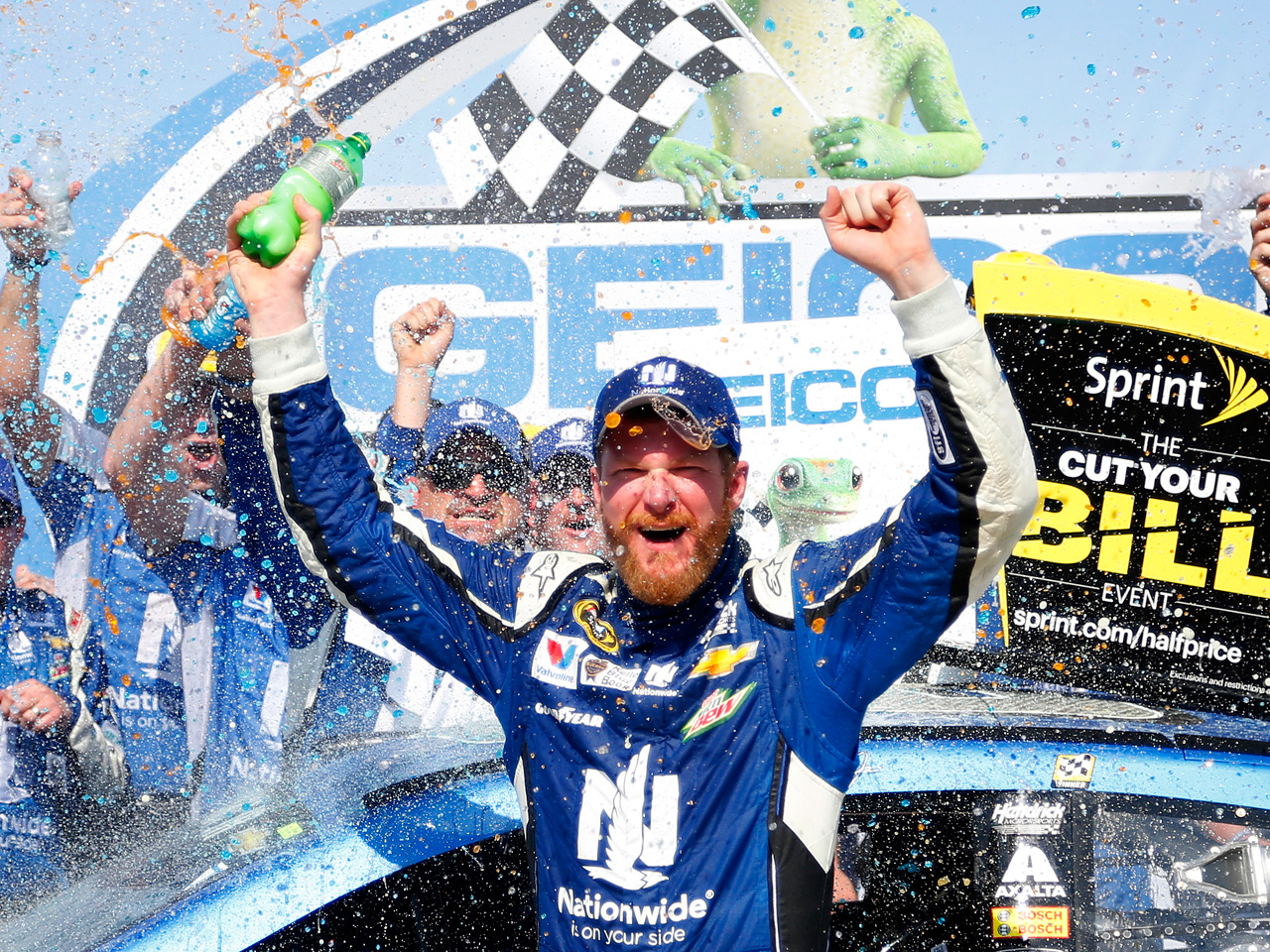 TALLADEGA, Ala. - At a track that has always been good to his family, in front of an adoring crowd that so clearly favors him over everyone else in the field, Dale Earnhardt Jr. cruised to an emotional first win of the season.

NASCAR's most popular driver won Sunday at Talladega Superspeedway, where he received a thunderous ovation as he pumped his fist outside the car window during a slow victory lap.

He stopped at the flag stand to grab the checkered flag and flew it out his car window as he savored his trip around the track and into victory lane.

It is Earnhardt's sixth victory at Talladega - but first since 2004 - and he choked back tears after he climbed from his No. 88 Chevrolet.

The late Dale Earnhardt, a first ballot Hall of Fame inductee, won 10 times at the Alabama track. He would have celebrated his 64th birthday Wednesday.

Earnhardt Jr. won four consecutive races at Talladega from 2001, after his father's death in the season-opening Daytona 500, through 2003. He then finished second in back-to-back Talladega races before grabbing his fifth victory in 2004.

But his dominance ended that season, then came several years of slumping results on the track. He finally turned it around last year with a victory in the season-opening Daytona 500, but poor strategy in this race last year cost him any shot at the victory.

His fan base was livid over Earnhardt's decision to lay back in the field last May, and he vowed to not do it again. On Saturday, he admitted he feels a sense of responsibility to his fans to perform well at Talladega.

Earnhardt delivered Sunday, leading a race-high 67 laps and easily winning when no one from a single-file line of cars behind him could challenge him.

The win almost certainly put him in the Chase for the Sprint Cup championship, and was Earnhardt's first with new crew chief Greg Ives.

"Everything is just so good for me right now, my personal life, my racing, the team I'm with, I don't know why," Earnhardt said. "I don't feel like I deserve it. I just feel overcome, you know, with a lot of emotion."

Jimmie Johnson finished second as Hendrick Motorsports dominated the race. But Johnson couldn't pull out of line to attempt a pass on Earnhardt, who was watching his mirror carefully to see who from the line would make a move.

He thought for sure it would be Johnson.

"I didn't know what he had up his sleeve, maybe they got busy behind him and he couldn't form a charge," said Earnhardt, who was worried in the closing laps his car was going to overheat.

"I didn't know if the engine was going to last. I had faith in it that it would because we build fast cars and they are tough. All those guys in the motor shop and the body shop, they earned their money."

Paul Menard was third and Ryan Blaney was a surprising fourth in the only Ford that could challenge the horsepower from the Hendrick Chevrolets.

Martin Truex Jr. was fifth and followed by Sam Hornish Jr. in another Ford, then Ryan Newman and Kevin Harvick as Chevy drivers took six of the first eight spots.

Denny Hamlin was ninth in the highest-finishing Toyota and Josh Wise rounded out the top 10.

Pole-sitter Jeff Gordon was a disappointing 31st despite a strong race car. He was penalized for speeding on pit road during the final pit stops, and the infraction dropped him to 30th on the restart with 26 laps remaining.

He was unable to work his way through the field as Earnhardt led a 10-car breakaway, and the second line of traffic struggled to catch the leaders. He was collected in a last-lap crash that began when Carl Edwards spun.

"Everybody was single file and just waiting for that final lap," Gordon said. "You knew it was going to get crazy. They finally spread out at one to go. I was just trying to find the lane that would not just be clear but have the momentum."

As the laps wound down, nobody seemed to want to make a move to challenge Earnhardt until finally Tony Stewart, the leader of the second line of cars, dropped to the bottom of the track in an effort to make something happen.

Only no one would work with Stewart, and he was shuffled back to a 19th-place finish after leading laps and challenging for the win.

Hamlin said his hands were tied and he couldn't do anything to challenge the Hendrick drivers at the front unless Blaney, in front of him as they started the final lap, worked with him.

"My goal was to push Blaney, but he was going to have to make a move," Hamlin said. "The odds were very stacked against us. The Hendrick cars and engines were just extremely tough and really I did my best just to kind of hang with those guys, but they're definitely in a league of their own right now."