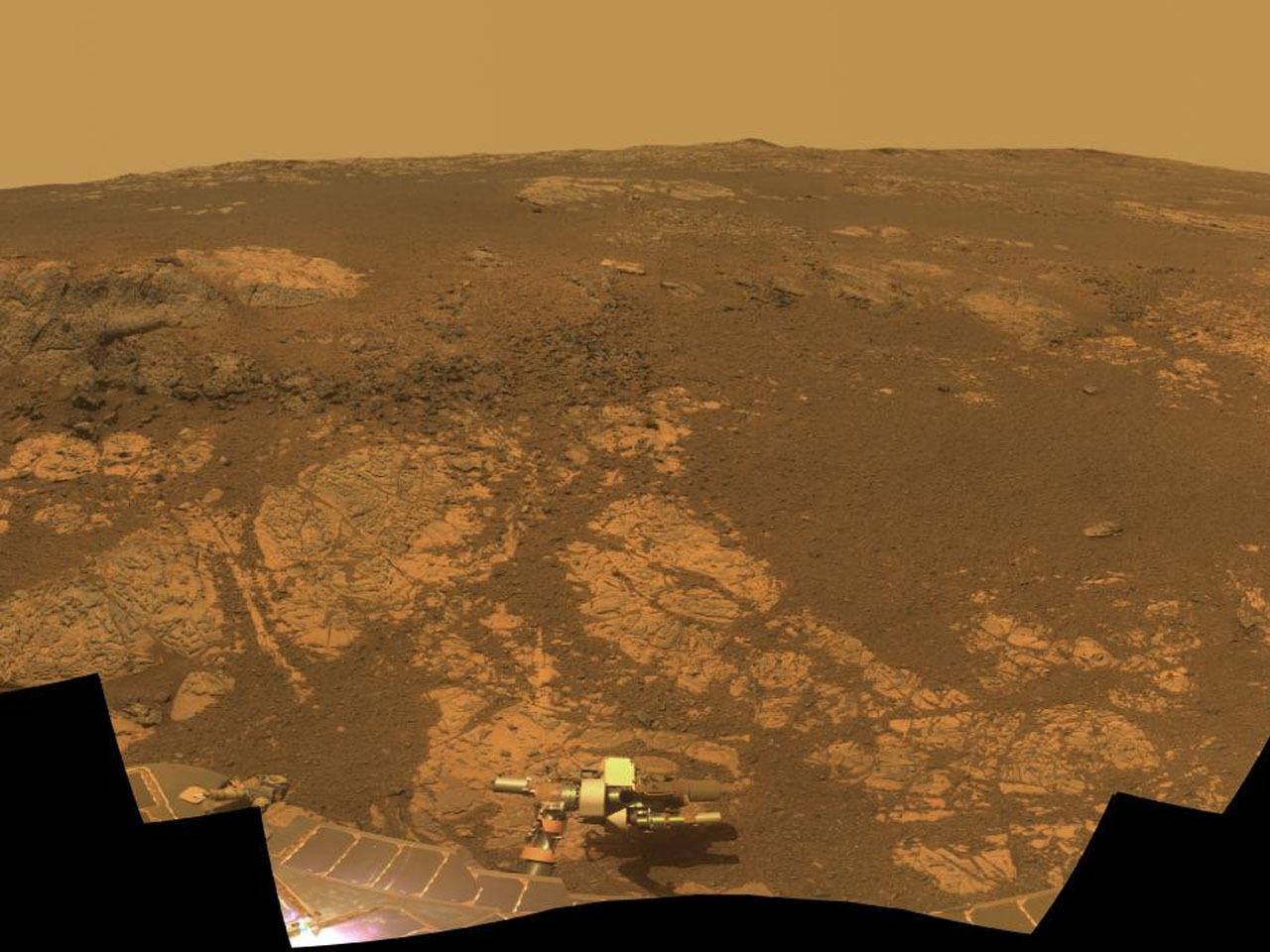 NASA's solar-powered Opportunity Mars rover, designed to operate for just 90 days on the red planet's cold, dust-shrouded surface, celebrates 10 years of exploration Friday, enduring a few age-related aches and pains and the occasional "senior moment" but still making valuable observations as it creeps along the rim of an ancient crater.

While engineers designed Opportunity and its now-defunct twin, Spirit, to rove about six tenths of a mile during their three-month design lives, Opportunity has now covered about 24 miles during some 3,500 days on Mars, snapping more than 170,000 images along the way.

"No one ever expected this, that after 10 years a Mars Exploration Rover would continue to operate, and operate productively, on the surface of Mars," said project manager John Callas.

In a paper to be published Friday in Science magazine, Opportunity researchers outline recent findings that appear in line with an emerging picture of Mars as a world that started out with a warmer, wetter, clearly habitable environment. But about three billion years ago, a dramatic case of climate change turned the planet into the cold, dry world seen today.

The Science paper discusses Opportunity's recent discovery of deposits that formed in the presence of water.

"If I were there back when this material was being emplaced and altered, and I had my summer house, this is where I would drill to get good drinking water," said lead author Ray Arvidson, Mars Exploration Rovers deputy principal investigator. "So the older you look, the better it gets."

NASA's nuclear-powered Curiosity rover is painting a similar, more detailed picture with its analysis of ancient clay deposits on the floor of Gale Crater that formed in a wet environment. Curiosity is headed for a towering mound of layered rocks at the center of the crater that may help scientists map out the history of the Martian climate.

In the meantime, finding out what happened, and whether life as it is known on Earth ever had a chance to evolve on Mars, remain open questions.

Curiosity was designed to operate for two years and given NASA's experience with Opportunity, engineers are hopeful it will last much longer when all is said and done. But Curiosity has a long way to go before it can challenge Opportunity.

"It's not how long the rover has lasted, or even how far it's driven, but the amount of scientific exploration and discovery that's been accomplished in that time," Callas said. "So after 10 years, Opportunity is still in very good health, and it's still, of course, very scientifically productive, although the rover has some degraded components."

Opportunity's right front steering actuator is jammed, its right front wheel motor is encountering resistance in its drive mechanism and its robot arm is showing signs of wear and tear.

In addition, Callas said, "there is one recent issue that we're keeping an eye on. Opportunity had a senior moment, we call this an amnesia event. This has to do with the flash file system on the rover, the non-volatile memory inside the rover."

"Right now, it's not a health or safety issue, it's just an operational annoyance," he said. "But if it gets precipitously worse, there are some corrective actions we can take to remedy this."

The original three-month design life was defined in part by a belief that ubiquitous wind-borne dust eventually would cover the rover's solar arrays, preventing them from generating the power needed to recharge the spacecraft's battery and keep critical systems warm.

But as it turned out, the martian wind periodically blows much of the dust away.

"Recently, we've had some wind events that have cleaned some of the dust off the arrays and so now the performance is at about 60 percent," Callas said. "This is higher than it has been for the past two martian winters. This is good news. It means that we have ample power through the winter, and that the rover can remain active and that we can drive pretty much almost every day and continue the exploration throughout the winter season."

Spirit was the first Mars Exploration Rover to reach the red planet, using a parachute, braking rockets and giant airbags to cushion its landing in Gusev Crater on Jan. 3, 2004. Opportunity landed on the other side of Mars, in a region known as Meridiani Planum, on Jan. 24.

After operating for six years, Spirit eventually got stuck in loose soil and NASA lost contact in 2010. But Opportunity remains in relatively good health, far exceeding even the most optimistic expectations.

"We have an operations team that has been very innovative figuring out how to get these rovers to survive the cold, dark martian winters, how we can conserve energy, continue to be productive but operate these vehicles at much lower power levels than they were originally designed (for)," Callas said. "These are magnificently built machines."

Opportunity's odyssey has carried from its landing site to nearby Endurance Crater, then to Victoria Crater and, more recently, the rim of the much larger Endeavour Crater. Its next objective is to climb a steep slope to a section of the rim known as Cape Tribulation. The trek could take up to two years, assuming Opportunity stays healthy.

"We have an exciting period of discoveries ahead of us," said Steven Squyres, the Mars Exploration Rover principal investigator. "As long as the rover keeps going, we'll keep going."

For Callas, Opportunity represents more that a purely scientific achievement. It symbolizes the long-term exploration of another world, providing "a great intangible, something different, something special."

"Over the past decade, through these rovers, our species has gone to work on Mars," he said. "And now, a generation has grown up with these rovers and have been inspired by them.

"So in addition to being earthlings, because of these rovers we have become Martians, too, dual citizens, if you will. We now live in a larger world, a world that extends beyond our own home planet. These rovers have made Mars our neighborhood and our backyard. And this is something truly remarkable."