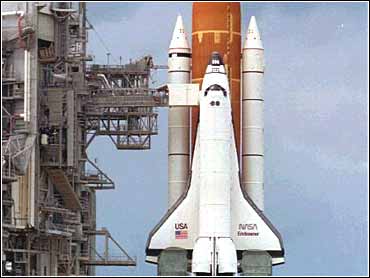 A space program worker deliberately damaged a computer that is supposed to fly aboard shuttle Endeavour in less than two weeks, an act of sabotage that was caught before the equipment was loaded onto the spaceship, NASA said Thursday.

The unidentified employee, who works for a NASA subcontractor, cut wires inside the computer that is supposed to be delivered to the international space station by Endeavour, officials said.

The space agency declined to speculate on a motive.

The computer is supposed to measure the strain on a space station beam and relay the information to flight controllers on Earth.

The damage would have posed no danger to either shuttle or station astronauts, said Bill Gerstenmaier, NASA's space operations chief.

The worker also damaged a similar computer that was not meant to fly in space, Gerstenmaier said.

NASA immediately checked the computer at the Kennedy Space Center and discovered the additional damage. Officials would have caught the problem through testing before flight, even if the subcontractor had not alerted NASA beforehand, Gerstenmaier said.

"The damage is very obvious. It's easy to detect. It's not a mystery to us," he said.

"I don't want to speculate on motivation," Gerstenmaier said.

Gerstenmaier declined to provide any information on the employee or company, but stressed that the tampering had nothing to do with an ongoing strike at the space center by a machinists union. He said the damage occurred outside Florida.

"There's an active investigation going on and I'd rather let that get handled that way," he said.

The subcontractor supplies computer equipment and strain gauges for the international space station, as well as wing sensor systems for the shuttle. NASA has surveyed all the parts that were provided by the subcontractor, Gerstenmaier said.

"There's no concern about anything that's on orbit," he added.