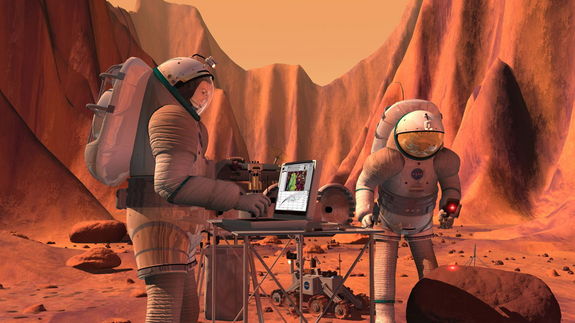 The path to Mars goes through the moon -- or the region of space near the moon, anyway.

NASA aims to put boots on Mars in the 2030s after first gathering human-spaceflight experience and expertise in low Earth orbit and the "proving ground" of cis-lunar space near the moon.

NASA has been working on this three-stage path to the Red Planet for some time, and the space agency lays out the basic plan in a 36-page report called "Journey to Mars: Pioneering Next Steps in Space Exploration," which was released Thursday. [5 Ideas for Manned Missions to Mars]

The first step in the three-phase Mars plan is already underway; NASA astronauts and their international colleagues have been living aboard the International Space Station continuously, in roughly six-month-long crew rotations, since November 2000. (The station will keep operating through at least 2024.)

These spaceflyers' experiences are helping researchers and mission planners better understand how spaceflight affects the human body and mind. In addition, the space station allows NASA and its partners to develop and test critical technologies in areas such as life support and space-to-ground communications, agency officials said.

The International Space Station orbits just 250 miles (400 kilometers) from Earth's surface. Robotic cargo ships bring supplies on a regular basis to the astronauts, who can be back on their home planet in a matter of hours if need be. Mars pioneers will have to be much more independent, and that's what the next step in NASA's Red Planet plan -- the proving ground -- is all about.

NASA aims to gain deep-space experience near the moon on a series of missions over the next decade or so. One such project is the Asteroid Redirect Mission (ARM), in which a robotic probe -- powered by advanced solar-electric propulsion, which NASA regards as a key technology for hauling big payloads to Mars -- will pluck a boulder off a near-Earth asteroid and haul it to lunar orbit, where it can be visited by astronauts in the future.

Orion's maiden flight, an uncrewed affair that used a United Launch Alliance Delta IV rocket, came last December. The capsule and SLS are scheduled to fly together for the first time in 2018, on a seven-day-long, uncrewed journey around the moon.

NASA also aims to test a deep-space habitation system in the proving ground, for short durations in the early 2020s and for longer missions later in the decade, according to the new report.

"A modular, pressurized volume would enable extended stays by crews arriving with Orion," the report states. "This initial habitation capability in cis-lunar space would demonstrate all the capabilities and countermeasures necessary to send humans on long-duration transit missions to Mars."

Sending astronauts to Mars is the third stage of the plan. This ambitious goal will be enabled by international cooperation, the knowledge and expertise gained by human missions to the space station and the proving ground, and by all the data gathered by robotic Red Planet explorers, according to the new report.

These spacecraft have already returned information of interest to the crewed Mars effort. For example, scientists analyzing MRO data announced late last month that the seasonal dark streaks on some Martian slopes are caused by liquid water.

And more robotic Mars missions are on the way. NASA plans to launch a lander called InSight next year to probe the Red Planet's interior and a highly capable rover in 2020. The Mars 2020 rover will hunt for signs of past life and cache samples for future return to Earth, among other tasks. It will also carry a technology-demonstrating instrument that generates oxygen from Mars' atmospheric carbon dioxide.

In addition, the European Space Agency's ExoMars project will send an orbiter toward the Red Planet in 2016, and a life-hunting rover in 2018.

"Robotic science pathfinder missions will continue well into the next decade to meet high-priority science objectives and prepare for future human missions to Mars," the new NASA report states. "Robotic missions after Mars 2020 are in their conceptual stages and will address key exploration questions, such as characterizing the complex gravitational environment of the Martian moons; identifying resources and areas of scientific interest; understanding the effects of space radiation; validating EDL [entry, descent and landing] techniques; and studying regolith mechanics and dust."

NASA is still working out the details about the journey to Mars. For example, astronauts may stop at one of Mars' two tiny moons, Phobos and Deimos, along the way. But putting boots on the Red Planet's surface, and setting up a permanent outpost, remain the ultimate goals.

"There are challenges to pioneering Mars, but we know they are solvable," the report states. "We are developing the capabilities necessary to get there, land there, and live there."

You can download the new NASA Mars report for free at this link.