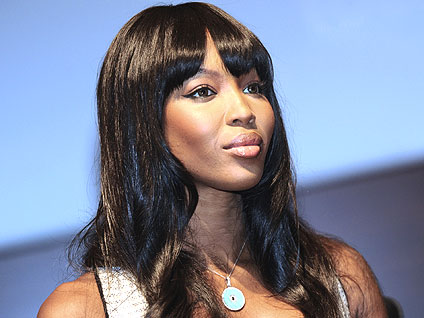 The British model is set to testify at a trial next month at The Hauge after witnesses say she allegedly procured a "blood diamond" from former Liberian President Charles Taylor under his controversial and violent regime. Both she and actress Mia Farrow are due to appear as witnesses in Taylor's war crimes tribunal.

According to South African newspaper The Mail & Guardian, events that surround a 1997 photograph of Campbell standing alongside Nelson Mandela - Charles Taylor and Farrow are also pictured - could prove to be a significant part of the case against Taylor.

The newspaper reports that the prosecution alleges he used profits from the sale of the diamonds to traffic weapons to the RUF, thereby fomenting and prolonging Sierra Leone's brutal civil war, which claimed hundreds of thousands of lives.

CNN reports that Campbell requested a postponement, which was granted. She was scheduled to appear at trial on July 29, but will now appear on Aug. 5.

Campbell did not want to be involved in the trial, but was subpoenaed on July 1. The former Liberian president is charged with five counts of crimes against humanity, including murder, sexual slavery and violence, and enslavement. He also faces five counts of war crimes, including acts of terrorism and torture, and one count of other serious violations of international humanitarian law.