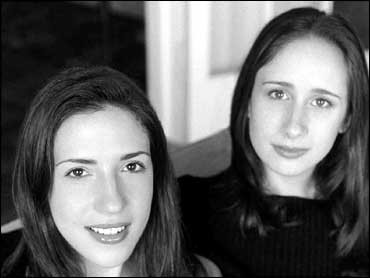 When we last saw Nanny, she was screaming into a spy camera hidden in a teddy bear.

The put-upon heroine of 2002's "The Nanny Diaries" had unleashed a stern rebuke to her pampered and clueless employers before marching out of their lives and restarting her own.

It was a cathartic end to a novel that would go on to sell more than 2 million copies, inspire a movie and launch the careers of its young co-authors, Emma McLaughlin and Nicola Kraus.

What happened to Nanny was a question that has gone unanswered for seven years. The writing duo penned three more books before deciding to finally revisit their best-loved heroine. It wasn't something they did lightly.

"We were terrified," says McLaughlin. "We've all loved books and then read a sequel to something that we loved and just wished the story had been left off where it had been. As consumers, as readers, we know what that is and I didn't want to do that to someone else."

The result is "Nanny Returns," which picks up 12 years after the teddy bear incident. After years abroad, Nan is 33, back in Manhattan and married to Ryan (aka Harvard Hotie) when she gets a drunken, late-night visit from 16-year-old Grayer, her former charge.

"It was emotional - very emotional - to go back to them," says McLaughlin, who says she cried when she co-wrote the opening passages. "We knew them."

During a recent interview at a Midtown cafe, the authors, including a very pregnant Kraus, scarf down salads as they detail their sudden rise, how they write and why it took so long to find out what happened to Nanny.

The duo, who met at New York University and had worked as nannies for more than 30 New York City families, spent two years writing "The Nanny Diaries" and had few expectations when it came out.

"We thought our parents would buy it and we would go on to our lives," McLaughlin says. "We were humbly blessed to catch the zeitgeist and step into a media cycle."

Somewhat lost in the hubbub - including endless attempts to unmask the villain of the book, known only as Mrs. X, who was based on a composite - was what the authors were trying to do: expose a social system that outsources parenting to an ever-changing phalanx of caregivers, producing unhappy children.

"When we wrote 'Nanny Diaries,' there were many things that we considered red flags waving. That didn't get through the hullabaloo about 'Nanny.' So we were like, 'We need to go back and underscore that if you let these kids grow up like this, they will someday be in charge of your health care,"' McLaughlin says.

"And they won't care," adds Kraus.

"Chick lit had just been born and I think no one quite knew what the ingredients were that were making women suddenly show up in the bookstores in these numbers," says McLaughlin. "So they (publishers) were really conservative about what they wanted to put back out there. It's understandable, but it wasn't necessarily the material that we wanted to explore."

Instead, they went on to write about feminism in the workplace in "Citizen Girl," a book their publisher, St. Martin's Press, passed on because it wasn't a Nanny sequel.

The writers then got a reported $2 million deal at Random House, but feeling uncomfortable there, paid it back and landed at Atria Books, a division of Simon & Schuster, which published "Citizen Girl," "Dedication," a novel about a woman who must confront a high school love, and a young adult novel, "The Real Real."

"I think they were very smart to wait to do this book," says their editor, Greer Hendricks, who adds that 150,000 copies of the new novel have been printed. "There was a demand immediately after the first book came out and they just weren't ready to tell that story."

Though the authors live in the same city - Kraus in the Brooklyn neighborhood of Cobble Hill, McLaughlin on the Upper West Side - they mostly connect in cyberspace.

After outlining plots together at a cafe or at one of their apartments, they each write and edit in separate chunks - Kraus starting out first thing in the morning and McLaughlin getting her best creative bursts at the end of the day. They say they've never thought of going solo.

"Which one of us wants to be Gwen Stefani?" asks Kraus with a smile. "Neither of us. Well, at least I'm can speak for myself."

"Neither of us," McLaughlin agrees.

"This works so well and we get so much out of it," Kraus said.

"I now pretty much write for Niki," says McLaughlin, turning to her friend: "That's how I know I'm done with a scene if it works for you."

The economy hadn't yet fully tanked when McLaughlin and Kraus began to think about a Nanny sequel. What, they thought, would happen when the affluent of the world they explored lost their money? They were also inspired after reading about the squabbles in one of the richest and best know New York families following the death of society doyenne Brooke Astor.

"That got us thinking ahead in the story: What does become of these people? And what are the multigenerational ramifications of this kind of system which creates these mini-psychotics," says McLaughlin. "I mean, if you can't form attachments, there are problems."

Kraus and her husband are already making sure they don't suffer the same fate with their first child, a girl due in January. And yes, she is considering a nanny.

"We're looking for day care centers in our neighborhood. If, for some reason, they don't work out or she doesn't like that, then we'd totally have a nanny if we could afford it," she says. "We're huge proponents that a private nanny can be awesome."

One last question remains: Now that they've birthed a sequel to their best-known work and are enjoying advance praise for "Nanny Returns," might they ever write about Nanny again?

"We now don't rule anything out," says Kraus. "That doesn't mean we have a vision for it, but I can conceive of the possibility that 10 years from now, we would suddenly see where these characters are at another time in our lives and want to revisit them again."
By Mark Kennedy