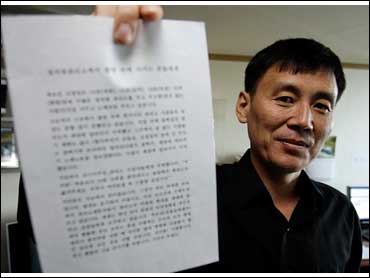 The condemned inmate, his body torn apart by guard dogs, slumped unconscious as the three executioners fired. The bullets shattered his skull, splattering blood near other prisoners forced to watch.

His offense: trying to escape from the remote prison camp in North Korea.

"People were seized with fear but no one could say anything," former prisoner Jung Gyoung-il said, recalling the 2001 execution. "That's worse than the way animals are slaughtered."

For a decade, North Korea has denied such accounts from defectors, and South Korea has shied away from them to maintain good relations with its wartime rival. But now, under new President Lee Myung-bak, South Korea is investigating alleged abuses, including the prison camp system. South Korea's state-run human rights watchdog is interviewing defectors and is hosting a two-day international forum on the issue this week.

Meanwhile, U.S. President George W. Bush has made the push to crack down on rights abuses in North Korea one of his last missions before leaving office in January. He signed a law promoting the U.S. special envoy on North Korean human rights to ambassador and making it easier for refugees from the North to settle in the U.S.

The focus on alleged abuses has infuriated North Korea, which dismisses the accusations as a U.S. plot to overthrow its government. The country's Central Committee of the Democratic Front for the Reunification of the Fatherland called Seoul's moves proof that South Korean officials are "sycophants toward the U.S." and "maniacs" who risk confrontation with the North.

North Korea runs at least five large political prison camps, together holding an estimated 150,000 to 200,000 inmates, according to the U.S. State Department. The gulags remain one of the Stalinist regime's most effective means of controlling its 23 million people, analysts say.

"With regard to the substantive issues of human rights as a whole, the pictures are still sadly very negative on many fronts," Vitit Muntarbhorn said.

South Korean National Assembly Speaker Kim Hyong-o, in written remarks to the forum, also said "severe outrages against humanity" such as executions and vivisection are reported to have frequently occurred in the North's prison camps.

Satellite images show the camps in valleys tucked between mountain ranges, each covering up to 100 square miles. Former prisoners say the camps are encircled by high-voltage electrified fences and have schools, barracks and work sites.

Offenses meriting banishment to a prison camp include everything from disparaging North Korean leader Kim Jong Il to trying to flee the country, defectors say.

Former prisoner Jung said he spent three years in Camp No. 15 in Yodok, about 70 miles northeast of the capital, Pyongyang, on charges of spying for South Korea.

Jung, who was working for a state-run trading company, claims the charges were fabricated by security agents seeking promotion. After months of torture, Jung said he acknowledged the charge. By then he had lost nearly 80 pounds.

Shortly after his release, he fled to South Korea in 2004 with his wife and two daughters and now works for a civic group on North Korean prisons.

At Yodok, Jung said, the 400 inmates in his section subsisted on 20 ounces of corn each - the equivalent of one medium-size can daily - while toiling at mines, farms and factories for 13 to 15 hours a day. Many died of hunger and diseases brought on by malnutrition, he said. Some managed to trap vermin and insects.

"People eat rats and snakes. They were the best food to recover our health," said Jung, 46, adding he still suffers from ulcers, headaches and back pain.

One inmate, Choe Kwang Ho, sneaked away from his work for 15 minutes to pick fruit. He was executed, his mouth stuffed with gravel to prevent him from protesting, Jung recalled.

"I still can't forget his emotionless face," he said.

Life at the four other camps was even worse, Jung said. A former North Korean prison guard said only two inmates have ever escaped from the camps known as "total control zones."

"Inmates there don't even have time to try to catch and eat rats," An Myeong-chul said in an interview in Seoul.

An said he served as a guard and driver at four camps before defecting in 1994. If a female inmate got pregnant, he said, she and her lover would be shot to death publicly. Then, An said, prison guards would cut open her womb, remove the fetus and bury it or feed it to guard dogs.

Forced abortions are common, and if babies are born, many are killed, sometimes before the mother's eyes, defectors say. Grandparents also may be punished since whole families are imprisoned.

"We were repeatedly taught they were the national traitors and we have to eradicate three generations of their families," he said.

An, 40, defected after his father, a former Workers' Party official, killed himself after being accused of criticizing the government food rationing system as inefficient. Now working at a bank in South Korea, An said he pushes for the abolishment of North Korea's prison camps as the least he can do to offset his work as a guard.

Public executions are not limited to the gulags.

Before he was imprisoned, Jung took his eldest daughter, then 8, to the execution of a prisoner in 1997 in the city of Chongjin. She watched solemnly as the inmate's skull was smashed to pieces.

"She asked me, 'Hey Daddy, is he vomiting?"' Jung recalled, a bitter grimace curling his lips. "I should not have taken her there."