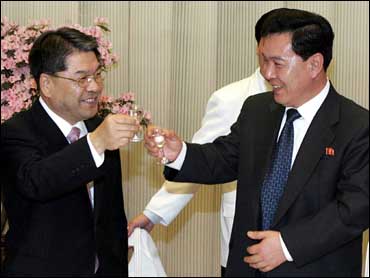 North Korea's No. 2 leader pledged his country's commitment Thursday to giving up its nuclear program amid intensifying diplomacy aimed at implementing Pyongyang's pledge to disarm.

"The denuclearization of the Korean Peninsula is the dying wish" of the country's late founding president Kim Il Sung, Kim Yong Nam said in Pyongyang during a visit from a high-level South Korean delegation.

The North "will make efforts to realize it," he said.

At the meeting, South Korean Unification Minister Lee Jae-joung pressed the North to implement a Feb. 13 pledge made with the U.S. and four other countries to take initial steps to disarm.

"It is important to make efforts to ensure that South and North Korea cooperate and six countries each assume their responsibilities," Lee said.

Kim Yong Nam also called on the Koreas to cooperate to achieve the reunification of the peninsula, which was divided in the wake of World War II and still remains technically at war since the 1950-53 Korean War ended in a cease-fire.

Kim also repeated the North's calls for inter-Korean collaboration, an idea South Korea has dismissed as a ploy to drive a wedge in Seoul's alliance with Washington.

This week's Cabinet-level talks between the North and South — the highest-level regular contact between the Koreas — are the first in seven months. The talks resumed after North Korea's agreement last month in Beijing to shut down its main nuclear reactor within 60 days in exchange for aid.

Meanwhile, the New York Times published a story Thursday that raises questions about how the U.S. got into the situation of having to negotiate with North Korea to abandon a well-developed weapons program.

The Times quotes an unnamed "senior administration official" who suggests the nuclear standoff with the North could have been avoided, or at least greatly eased, had the White House "handled differently" evidence in 2002 that suggested Pyongyang was enriching uranium to create a bomb.

American intelligence officials are "publicly softening their position" on how much progress has actually been made in that enrichment process, according to the report.

"The question now is whether we would be in the position of having to get the North Koreans to give up a sizable arsenal if this had been handled differently," the official told The Times.

Earlier Thursday, North Korean negotiators appealed for aid from the South, but Seoul appeared resistant to promising any major assistance until Pyongyang keeps its pledge to start dismantling its nuclear program.

"The North side has brought up the issue of humanitarian aid," a South Korean official told reporters in Pyongyang, where talks between the two Koreas stretched into a third day.

But the official, indicating the South's reluctance to provide the North with badly needed supplies, said that a draft agreement between the two sides "does not specifically mention rice and fertilizer aid." The official did not give his name due to the sensitivity of the ongoing talks.

South Korea had regularly sent aid to the impoverished North until last July, when Pyongyang test-fired a series of missiles, prompting a halt in shipments. Relations between the two countries further soured after the North tested a nuclear weapon in October.

North Korea also has proposed that the two countries resume economic cooperation talks in March, but Seoul was apparently opposed to holding the talks so soon, according to pool reports.

The two Koreas have made historic strides toward reconciliation after their leaders met for the first time in 2000, and this week's talks are the 20th such Cabinet-level meeting since then.

On Thursday, South Korean President Roh Moo-hyun stressed the nuclear deal "should be successfully implemented so that a peace regime can be firmly established on the Korean peninsula."

The Feb. 13 deal calls for a separate forum on discussing a peace agreement to replace the cease-fire that has held the Korean War at a standstill since 1953.

Meanwhile, the countries involved in the nuclear talks — the Koreas, China, Japan, Russia and the U.S. — have begun preparations to implement the disarmament pact.

In Washington, State Department spokesman Sean McCormack said that U.S. and North Korean officials will meet in New York next Monday and Tuesday to discuss normalizing relations, one of the steps to be taken under the nuclear deal.

Also Thursday, the State Department's No. 2 diplomat, John Negroponte, arrived in Japan for a tour expected to focus on the North Korea nuclear issue that will also take him to South Korea and China.

South Korean Foreign Minister Song Min-soon also left for Washington Thursday for talks on North Korea with his counterpart, Secretary of State Condoleezza Rice. He also will travel to Moscow.