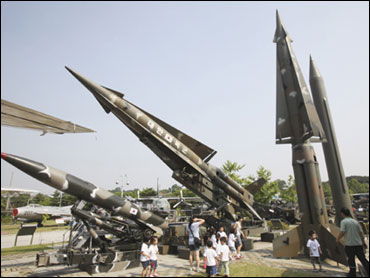 North Korea may fire a long-range ballistic missile toward Hawaii in early July, a Japanese news report said Thursday, as Russia and China urged the regime to return to international disarmament talks on its rogue nuclear program.

The missile, believed to be a Taepodong-2 with a range of up to 4,000 miles, would be launched from North Korea's Dongchang-ni site on the northwestern coast, said the Yomiuri daily, Japan's top-selling newspaper. It cited an analysis by the Japanese Defense Ministry and intelligence gathered by U.S. reconnaissance satellites.

The missile launch could come between July 4 and 8, the paper said.

While the newspaper speculated the Taepodong-2 could fly over Japan and toward Hawaii, it said the missile would not be able to hit Hawaii's main islands, which are about 4,500 miles from the Korean peninsula.

A spokesman for the Japanese Defense Ministry declined to comment on the report. South Korea's Defense Ministry and the National Intelligence Service - the country's main spy agency - said they could not confirm it.

Tension on the divided Korean peninsula has spiked since the North conducted its second nuclear test on May 25 in defiance of repeated international warnings. The regime declared Saturday it would bolster its nuclear programs and threatened war in protest of U.N. sanctions taken for the nuclear test.

Pyongyang warned Wednesday of a "thousand-fold" military retaliation against the U.S. and its allies if provoked.

U.S. officials have said the North has been preparing to fire a long-range missile capable of striking the western U.S. In Washington on Tuesday, Gen. James Cartwright, vice chairman of the Joint Chiefs of Staff, said it would take at least three to five years for North Korea to pose a real threat to the U.S. west coast.

President Obama and South Korean President Lee Myung-bak met in Washington on Tuesday for a landmark summit in which they agreed to build a regional and global "strategic alliance" to persuade North Korea to dismantle all its nuclear weapons. Mr. Obama declared North Korea a "grave threat" to the world and pledged that the new U.N. sanctions on the communist regime will be aggressively enforced.

In Seoul, Vice Unification Minister Hong Yang-ho told a forum Thursday that the North's moves to strengthen its nuclear programs is "a very dangerous thing that can fundamentally change" the regional security environment. He said the South Korean government is bracing for "all possible scenarios" regarding the nuclear standoff.

The independent International Crisis Group think tank, meanwhile, said the North's massive stockpile of chemical weapons is no less serious a threat to the region than its nuclear arsenal.

It said the North is believed to have between 2,500 and 5,000 tons of chemical weapons, including mustard gas, phosgene, blood agents and sarin. These weapons can be delivered with ballistic missiles and long-range artillery and are "sufficient to inflict massive civilian casualties on South Korea."

"If progress is made on rolling back Pyongyang's nuclear ambitions, there could be opportunities to construct a cooperative diplomatic solution for chemical weapons and the suspected biological weapons program," the think tank said in a report released Thursday.

It also called on the U.S. to engage the North in dialogue to defuse the nuclear crisis, saying "diplomacy is the least bad option." The think tank said Washington should be prepared to send a high-level special envoy to Pyongyang to resolve the tension.

In a rare move, leaders of Russia and China used their meetings in Moscow on Wednesday to pressure the North to return to the nuclear talks and expressed "serious concerns" about tension on the Korean peninsula.

The joint appeal appeared to be a signal that Moscow and Beijing are growing impatient with Pyongyang's stubbornness. Northeastern China and Russia's Far East both border North Korea, and Pyongyang's unpredictable actions have raised concern in both countries.

After meetings at the Kremlin, Chinese President Hu Jintao joined Russian President Dmitry Medvedev in urging a peaceful resolution of the Korean standoff and the "swiftest renewal" of the now-frozen talks involving their countries as well as North and South Korea, Japan and the United States.

"Russia and China are ready to foster the lowering of tension in Northeast Asia and call for the continuation of efforts by all sides to resolve disagreements through peaceful means, through dialogue and consultations," their statement said.

The comments - contained in a lengthy statement that discussed other global issues - included no new initiatives, but it appeared to be carefully worded to avoid provoking Pyongyang. In remarks after their meetings, Medvedev made only a brief reference to North Korea, and Hu did not mention it.

South Korea's Lee said Wednesday in Washington that it was essential for China and Russia to "actively cooperate" in getting the North to give up its nuclear program, suggesting the North's bombs program may trigger a regional arms race.

"If we acknowledge North Korea possessing nuclear programs, other non-nuclear countries in Northeast Asia would be tempted to possess nuclear weapons and this would not be helpful for stability in Northeast Asia," Lee said in a meeting with former U.S. officials and Korea experts, according to his office.