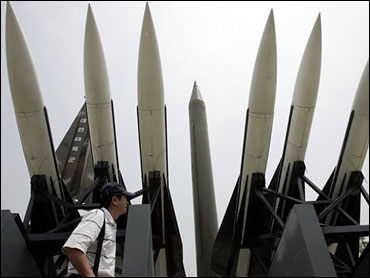 North Korea has finished loading fuel into a long-range ballistic missile, a Bush administration official said Monday, as signs continued that the reclusive communist state will soon test a weapon that could reach the United States.

reports the Taepodong-2 missile is waiting on the launch pad. If fueled, North Korea either has to launch it within the next two days, or remove the fuel.

North Korea referred to its missile program for the first time Monday amid international reports it has apparently completed fueling for a test launch.

A North Korean state television broadcast, monitored in Seoul, said nothing about whether the North intended to test-launch a long-range missile capable of reaching the United States. But the report cited a Russian editorial on the subject and said the North "has the due right to have a missile that can immediately halt the United States' reckless aerial espionage activity."

The North has repeatedly complained in recent weeks about alleged U.S. spy planes watching its activities.

At the White House, spokesman Tony Snow declined specific comment on reports that the fueling is complete.

"North Korea has imposed a moratorium on launching missiles," Snow said. "We hope it will continue that moratorium and we hope it also will abide by commitments it made," last year to dismantle nuclear weapons and renounce further development of them.

The South Korean government sought to downplay concerns about a possible missile launch, with domestic media reports in early editions of Tuesday newspapers citing officials saying the North may actually be seeking to launch a satellite.

The launch — whether it will be a satellite or a missile — hasn't entered its final countdown, the Hankook Ilbo newspaper said, citing government officials.

In 1998, when the North test-fired a Taepodong-1 ballistic missile over northern Japan, the country claimed it was a satellite launch.

Increasing signs of a possible launch have posed new hurdles for a trip to the North by Kim Dae-jung, said Choi Kyung-hwan, an aide to the former South Korean president.

Kim had been expected to meet in Pyongyang with North Korean leader Kim Jong Il, and push for the country's return to the nuclear talks during a four-day trip scheduled for next week.

"With regard to the missile concerns, the situation is getting difficult," Choi said. He added, however, that the South is waiting for a response on final details of the visit.

Kim Dae-jung won the Nobel Peace Prize for his policy of engagement with the North, which culminated in the first and only summit between the two sides in 2000.

Concerns over the possible missile launch come as the two Koreas are at odds over the North's last-minute cancellations of test runs of inter-Korean railways, dashing Kim Dae-jung's hopes of riding into the North via train.

As talks of a North Korean nuclear test swirl around Asia, many are looking to its closest ally for a solution, reports . China has been quiet on North Korea's possible plans to test a nuclear missile, but that doesn't mean it isn't trying to influence its neighbor. Beijing has repeatedly said it is against North Korea becoming a nuclear power, and as its largest aid donor, many believe China has the best shot at convincing the North to back down.

The nuclear talks — between the two Koreas, China, Japan, Russia and the United States — have been deadlocked since November, with no progress toward implementing a September agreement in which the North pledged to give up its nuclear program in exchange for aid and security guarantees.

Meanwhile, South Korea's ruling party said the North "should not put its friend in danger" by test-firing a missile, referring to the six-nation talks on the North's nuclear program.

"It is time for (the North) to make a decisive move toward establishing peace on the Korean Peninsula through cooperation with South Korea," the Uri Party's Kim said, adding that ministers would brief ruling lawmakers Tuesday on the latest developments of a possible missile test.

The main opposition Grand National Party lashed out Monday at President Roh Moo-hyun, condemning his administration's aid to the North and saying it should do more to counter the possibility of a missile launch.

"All of our aid to North Korea should be halted," GNP lawmaker Kim Hak-won said at a party meeting. "We should actively stop our funds to the North being diverted to making nuclear weapons and ballistic missiles."

Despite tension over the missile, more than 400 South Koreans crossed the heavily armed border Monday to meet relatives in the North they haven't seen since the 1950-53 Korean War.

More than 1,700 Koreans will meet during a series of three-day reunions set to last through June 30 at the North's Diamond Mountain resort, the South's Unification Ministry said.

The two Koreas remain technically at war, since the conflict ended in a cease-fire, not a peace treaty.

But their relations have significantly warmed since the historic leaders' summit, leading to more economic exchanges and massive South Korean aid to the impoverished North.