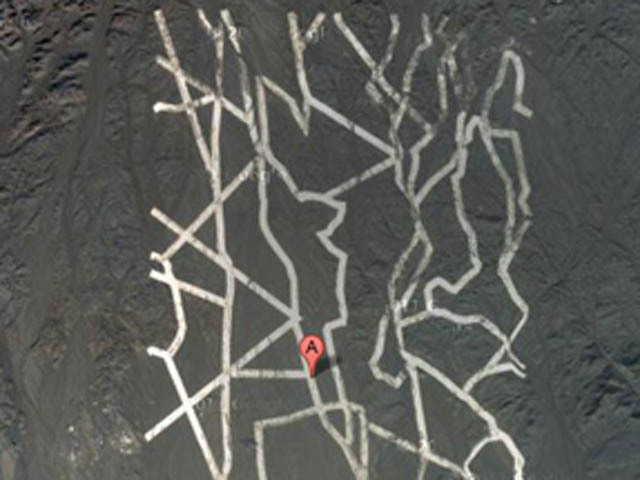 Newfound Google Maps images have revealed an array of mysterious structures and patterns etched into the surface of China's Gobi Desert. The media -- from mainstream to fringe -- has wildly speculated that they might be Chinese weapons-testing sites, satellite calibration targets, street maps of Washington, D.C., and New York City, or even messages to (or from) aliens.

It turns out that they are almost definitely used to calibrate China's spy satellites.

So says Jonathon Hill, a research technician and mission planner at the Mars Space Flight Facility at Arizona State University, which operates many of the cameras used during NASA's Mars missions. Hill works with images of the Martian surface taken by rovers and satellites, as well as data from Earth-orbiting NASA instruments.

The grids of zigzagging white lines seen in two of the images -- the strangest of the various desert structures -- are spy satellite calibration targets. Satellite cameras focus on the grids, which measure approximately 0.65 miles wide by 1.15 miles long, and use them to orient themselves in space. [Gallery: Mysterious Structures In China's Gobi Desert]

The existence of these calibration targets may seem suspicious or revelatory, but Hill said it really isn't; China was already known to operate spy satellites, and many other countries (including the United States) do so as well. In fact, the U.S. also uses calibration targets. "An example I found just now is a calibration target for the Corona spy satellites, built back in the 1960s, down in Casa Grande, Ariz., [at coordinates] 32° 48' 24.74" N, 111° 43' 21.30" W," Hill told Life's Little Mysteries, a sister site to LiveScience.

The 65-foot-wide white lines that make up China's grids are not made of reflective metal as many news sites have suggested. "They have gaps in them where they cross little natural drainage channels and the lines themselves are not perfectly filled in, with lots of little streaks and uneven coverage. I think it's safe to say these are some kind of paint," Hill said, noting that if they were made of white dust or chalk, the wind would have caused them to streak visibly.

Yanny vs. Laurel: What do you hear?

The calibration targets are larger than might have been expected, he said, suggesting that the satellite cameras they are being used to calibrate have surprisingly poor ground resolution.

Another strange image taken not far away shows a Stonehenge-like arrangement of objects radiating outward, with fighter jets parked at its center. "This is almost certainly a calibration/test target for orbital radar instruments," Hill said. "Since a significant amount of radar return is due to differences in surface roughness, they're probably testing ways of making the areas around planes 'bumpy' enough that the planes are partially masked."

In other words, the Chinese military probably uses radar instruments to send signals down at the target from above, and determine how much radar bounces back to the instruments from the fighter jets, and how much gets scattered by the Stonehenge-like arrangement of bumps surrounding them. From this, the country's radar experts can learn how best to hide China's military operations from other countries' satellites, and possibly get clues for how to find carefully hidden objects in other countries. However, the fact that the planes are made out of metal will increase their radar return and make it very hard to completely mask them, Hill said.

Since the initial reports of these structures became widespread, industrious readers of the gadget blog Gizmodo have spotted a few more interesting structures in China. One, Hill said, appears to be a weapons testing zone, perhaps for evaluating explosives. Elsewhere, a giant grid resembles a Yagi antenna array. Instruments like this can be used for any number of things, such as weather tracking, space weather tracking and high-altitude atmospheric research.

Hill noted that most of these structures are quite closer to each other. "I think we're seeing some sort of military zone/test range, which explains the large amount of equipment and technology in an otherwise remote area," he said. "Sometimes the truth can be just as interesting, if not more so, than the conspiracies that people come up with."