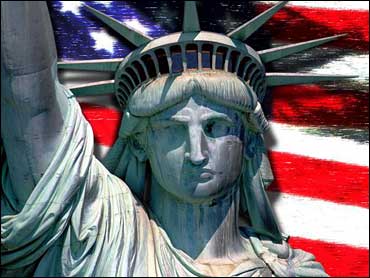 About half the states have passed laws that make English the official language of their state. Why is there a need for these laws? Isn't English already the language of the United States? Yes and no. What English-only advocates are bothered by are things like bilingual education, election information and ballots being in languages in addition to English, etc. The attitude is, "my ancestors had to learn English to get along in this country, why shouldn't the new immigrants have to do the same thing?" At first glance, it doesn't seem to be very controversial, does it? So, let's take a few more glances at it.

Not everybody learns English immediately when they come to this country. Some of us had ancestors who could barely speak English their whole lives. Many of these "old" immigrants — the ones from Europe that the English-only people seem to consider the "good" immigrants — lived in neighborhoods with other people from their homelands. That made it natural for many of them to speak the language from the old country at home. This is one thing some English-only advocates say they don't like about the "new" immigrants. They see them as cliquish people unwilling to assimilate.

One troublesome aspect of this movement is that while many people simply and sincerely believe that English should be the only language used in public schools and public documents, there is a more sinister attitude among some other people. Some people just hate people from foreign lands. I saw a bumper sticker on a car yesterday that read, "Speak English Or Die."

Believe it or not, I'm not the expert on heavy metal music that you may have thought I was. So, I had to go to the Internet to learn that "Speak English or Die" is the name of a song recorded by the group with the pleasant name, "Stormtroopers of Death." The chorus of the little ditty goes like this:

"You always make us wait
You're the ones we hate
You can't communicate
Speak English or die."

They also have a verse that says,

"You come into this country
You can't get real jobs
Boats and boats of you
Go home, you F&*%#ing slobs."

Obviously, I have no way of measuring how many of the pro English-only people have these prejudiced views. But just the fact that there are some is disturbing enough. These words are certainly a far cry from the inscription on the Statue of Liberty.

Many people claim that the main reason they're for this is to save money by doing away with public documents in non-English. But is that just an excuse for some bigoted people who hate "foreigners?" Are they the same people who get upset no matter where they travel in the world because the people they meet can't speak English?

One could get carried away with this "must speak proper English" thing. For one thing, if that were a requirement for public service, George Bush could not be our president.

The English-onlies seem to want one uniform language that all Americans can understand. That's not how English was ever spoken in the United States. If a person from one part of the country has trouble understanding a person from another region, should we outlaw regional slang and accents, too?

When President Bush pronounces "nuclear" properly, maybe I'll consider getting on board. When I stop hearing good American-born citizens say things like, "That's between you and I" (instead of "between you and me"), when I stop reading the non-word "alright," when I stop hearing people tell me that something was "funner" than something else, maybe then I'll think it's time we challenged immigrants to speak as well as native-born Americans. But until we can set a better example, it's hard to be upset about new arrivals who don't speak properly.

One thing the English-onlyites seem to forget is that America has always been a melting pot. There are examples of Spanish, French, Yiddish, and German words that have been absorbed by English and are now used by Americans every day. It makes for a richer language and culture. Is there any reason to think that in the future when we start to adopt some of the language of the "new" immigrants, that English will be any less enriched?

I know some people may say that my attitude "literally" made them explode, but unless they actually blew up, they, too, should learn better English before they criticize others.