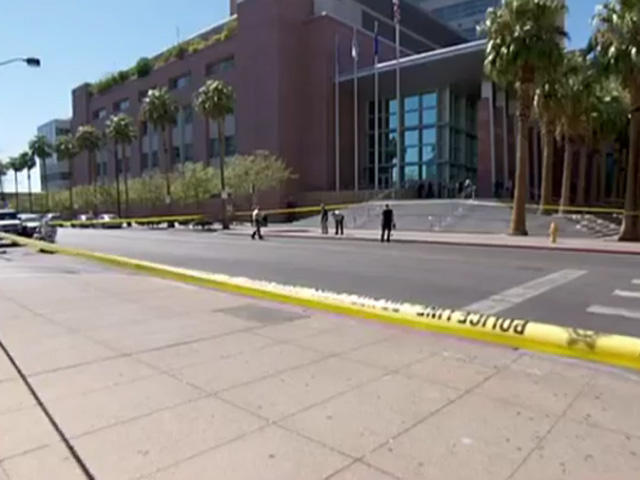 LAS VEGAS -- The sister of a murder victim was hit by a car Monday on a sidewalk outside the Las Vegas courthouse where the man charged in the killing is standing trial and where she is on a list of potential witnesses, authorities said.

It wasn't clear if the crash was directly related to the injured woman's possible testimony, or if she and the driver had a separate dispute, police Capt. Andrew Walsh said.

"She was here for a court proceeding when she was struck by that vehicle," Walsh said. "We believe it was an intentional act."

However, court officials said she is a relative of the man accused in the killing a year ago at a Las Vegas  apartment complex.

The victim of the hit-and-run was identified in court as Queva Stafford.

Prosecutor Giancarlo Pesci said she wasn't expected to testify at the trial, even though her name was on the witness list.

Walsh had said the victim knows the motorist, and described the driver of the cream-colored Cadillac sedan that hit her and drove away.

Stafford suffered a lower leg injury in the lunchtime crash outside the downtown Regional Justice Center and was treated at University Medical Center.

Proceedings continued in the trial in the courthouse as investigators gathered evidence on the hit-and-run outside, reports CBS las Vegas affiliate KLAS-TV.

Both women had been in court for opening statements in the trial of Asa Javon Brown, 24, in the killing a year ago of 47-year-old Jessie Mann Bush.

The suspect could face felony charges including battery with a deadly weapon and leaving the scene of a crash causing bodily injury, officials said.

Walsh said the driver was apparently alone inside the Cadillac.  Witnesses said it struck the woman on the sidewalk near a bus stop at the bottom of concrete stairs and drove away.

The police captain said investigators were collecting surveillance video from several locations outside the courthouse.

Before afternoon testimony began, Clark County District Court Judge Douglas Herndon questioned jurors about whether they had seen or heard anything about the crash.

No jurors were removed from the case.