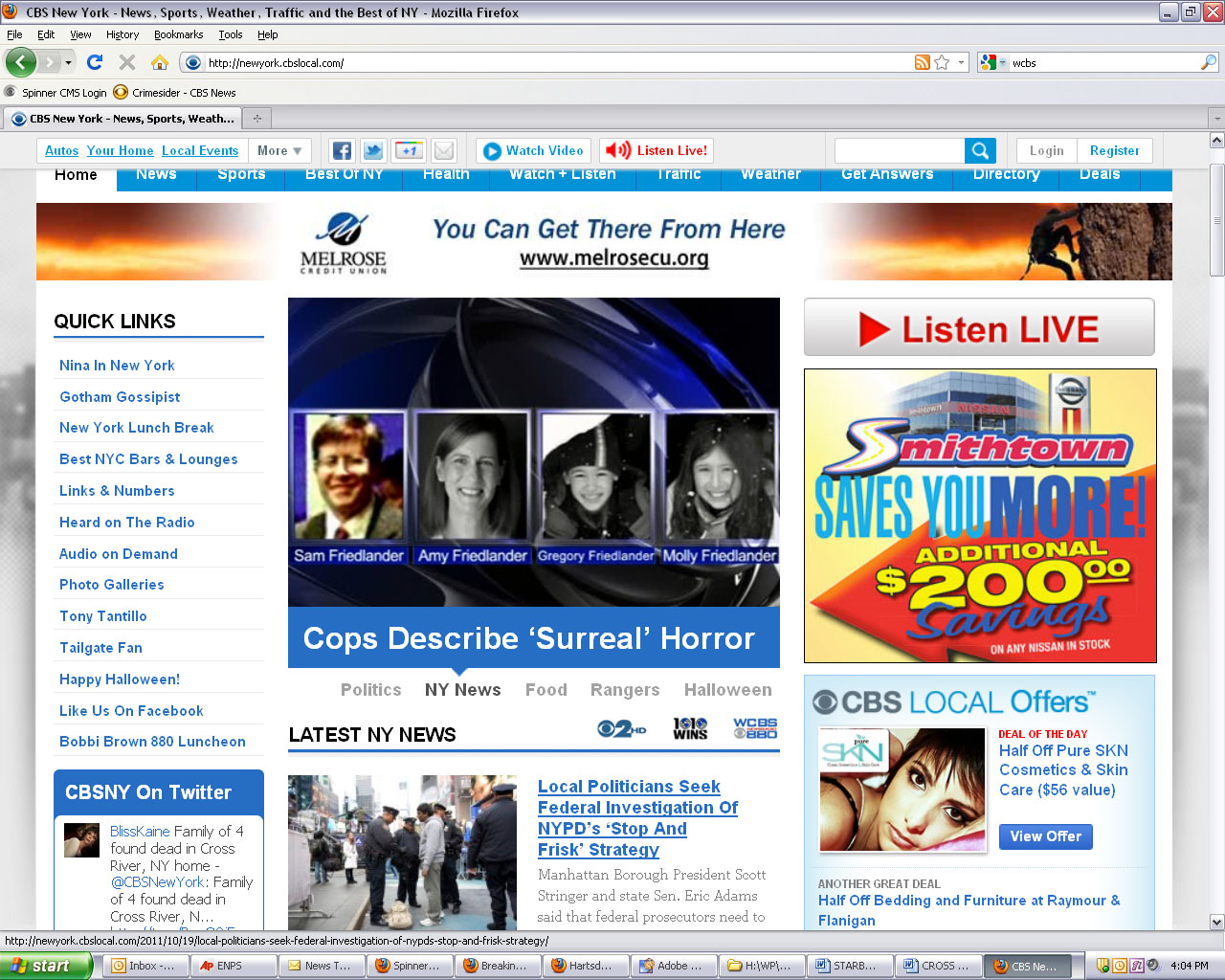 (CBS/AP) CROSS RIVER, N.Y. - Sam Friedlander, who was in the middle of a divorce, fatally shot his two children in their beds, bludgeoned his wife to death with the leg from a piece of furniture, then killed himself in the basement of their suburban New York home, police said Wednesday.

The bodies of Amy and Sam Friedlander and their children, 8-year-old Gregory and 10-year-old Molly, were discovered Tuesday afternoon, hours after their deaths, in affluent Cross River, north of New York City. All were in nightclothes, police said.

The couple had a divorce proceeding scheduled for Thursday, but were still living under the same roof, in separate bedrooms, said state police Maj. Michael Kopy. The husband was 50, the wife 46.

The children were found dead in their beds, shot in the torso and then covered with bedspreads, Kopy said. He said it wasn't yet known if they were asleep when they were shot.

Their mother lay dead on the floor of the master bedroom, amid the bloody evidence of a struggle, Kopy said. The furniture leg lay nearby and was likely the murder weapon, he said.

The father's body was in the unfinished basement, along with the shotgun he used. Kopy said no suicide note had been found as of Wednesday afternoon.

Counselors were summoned for the officers who encountered the carnage and the investigators who processed the crime scenes scattered through the house.

Police had been alerted by the wife's worried business partner.

"She was aware that Mr.and Mrs. Friedlander had been involved in divorce proceedings and that she had not heard from Mrs. Friedlander during the day," Kopy said. "She felt that was unusual and she asked troopers to go out to the residence."

Kopy said a domestic incident was reported at the house in 2006, with no arrest. He said it was "an argument over the children, certainly not indicative of what transpired here Monday night into Tuesday morning."

He said Sam Friedlander had no criminal record.

The couple's May 2000 wedding announcement in The New York Times said Amy Friedlander was a vice president for Chase Manhattan Bank and her husband a lawyer for the National Association of Insurance Commissioners.

The Friedlanders' rabbi, Carla Freedman of the Jewish Family Congregation in South Salem, said the couple had been "experiencing a variety of different stresses."

"We knew about the divorce, and the house was for sale, and there were financial concerns," she said. "But nothing said, `Red flag.' "