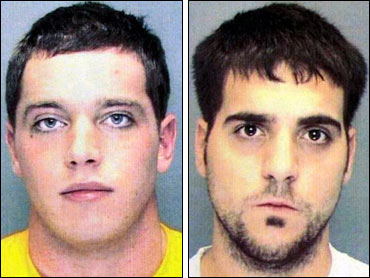 Two students have been charged with murder and arson for allegedly setting the fire that killed three freshmen at a Seton Hall University dorm nearly 3 1/2 years ago, authorities said Thursday.

The two, residents of the freshman dormitory at the time, were arrested Wednesday after being indicted by a special grand jury.

In addition to murder and arson, Joseph T. LePore of Florham Park and Sean Ryan of Livingston were charged with aggravated assault and conspiring in a coverup, authorities said.

The two used matches or a lighter to ignite a paper poster that had been torn down and placed on a couch made of highly flammable foam, Acting Essex County Prosecutor Donald Campolo said.

The indictments also accused LePore's parents and 24-year-old sister of charges including obstruction of justice, hindering apprehension and conspiracy. Another Seton Hall student, 21-year-old Santino Cataldo, was charged with witness tampering, obstruction and conspiracy for allegedly lying to investigators.

LePore and Ryan, both 22, were jailed on $2 million bail each, Campolo said.

The New York Times reported that LePore, Ryan and Cataldo were high school friends who entered Seton Hall together in the fall of 1999. Students interviewed by the newspaper said their names often surfaced in rumors about who might be responsible for the blaze.

"He didn't do it," Ryan's lawyer Michael S. Bubb said.

"The charges are false," Alfano said. "In my view, this is nothing more than a prosecutor who yielded to public and political pressure to bring charges after three years of an investigation that went nowhere."

The prosecutor refused to detail what led to the break in the case or elaborate about a motive for the fire.

"This was an extraordinarily complex investigation," he said, noting that investigators interviewed 600 of the dorm's residents, recreated the fire and conducted an undercover investigation. "The crime scene was literally consumed by fire. Add to this the fact that certain individuals engaged in a coverup from day one."

Ryan was arrested without incident; LePore was arrested outside an apartment complex after he backed his car into an officer's vehicle while trying to flee, the prosecutor said.

Ryan and Cataldo were still students at Seton Hall, but were suspended Thursday, said Robina Schepp, a university spokeswoman. LePore transferred to the University of Delaware, officials at that school said.

The indictment also charged Rivano Andika, 29, of Jersey City with terroristic threats. Authorities said Andika sent an e-mail message to Seton Hall a day after the fire threatening to set another blaze. He is not charged with having any role in the fire.

The blaze broke out at 4:30 a.m. on Jan. 19, 2000, in a third-floor lounge of Boland Hall, home to 600 freshman at the South Orange campus, killing 19-year-old freshmen Frank Caltabilota of West Long Branch, John Giunta of Vineland and Aaron Karol of Green Brook. More than 50 others were injured, some critically.

As smoke poured into the halls, scared students in pajamas grabbed coats or blankets and fled into bitter pre-dawn cold. One leaped from a third-floor window of the six-story dorm.

The Times reported that fire alarms in the dorm often went off for no reason. As a result, many students ignored the alarms that went off after the blaze started.

The building did not have sprinklers because it was built before they were required. The university has since installed them, and the state enacted a law requiring all dorm rooms in New Jersey to have sprinklers by 2004.

The special grand jury also issued a recommendation that the state of New Jersey adopt flammability standards for furniture used in public and private settings.