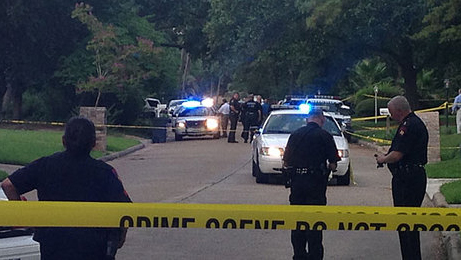 SPRING, Texas - Six people, four of them children, were shot dead and and a teenage girl was wounded Wednesday in a suburban Houston home, CBS affiliate KHOU reported. The suspected shooter surrendered after a three-hour standoff with police.

Harris County deputies responding to a report of a shooting at about 6 p.m. found the victims in a home in the Enchanted Oaks subdivision in Spring, north of Houston.

Deputies said two adults and three children were dead at the scene. Another child was taken to a hospital but died there, authorities said.

A 15-year-old girl who was wounded was able to tell identify the gunman to police. The suspect had fled the scene in a car, authorities said.

"It appears this stems from a domestic issue with a breakup in the family from what our witness has told us," Assistant Chief Deputy Constable Mark Herman of the Harris County Precinct 4 Constable's Office told reporters.

The teen was airlifted to Memorial Hermann Hospital but her condition was not known.

Nearly two dozen deputy constables' patrol cars pursued the suspect and finally cornered the man in his car in a cul-de-sac in a northern Houston suburb.

After three hours of waiting and negotiations, the man emerged from his car, raised his hands and sank to his knees as deputies placed him under arrest.

The identities of the suspect and the victims were not immediately released. KHOU said the victims ranged in age from 5 to 40 years old.