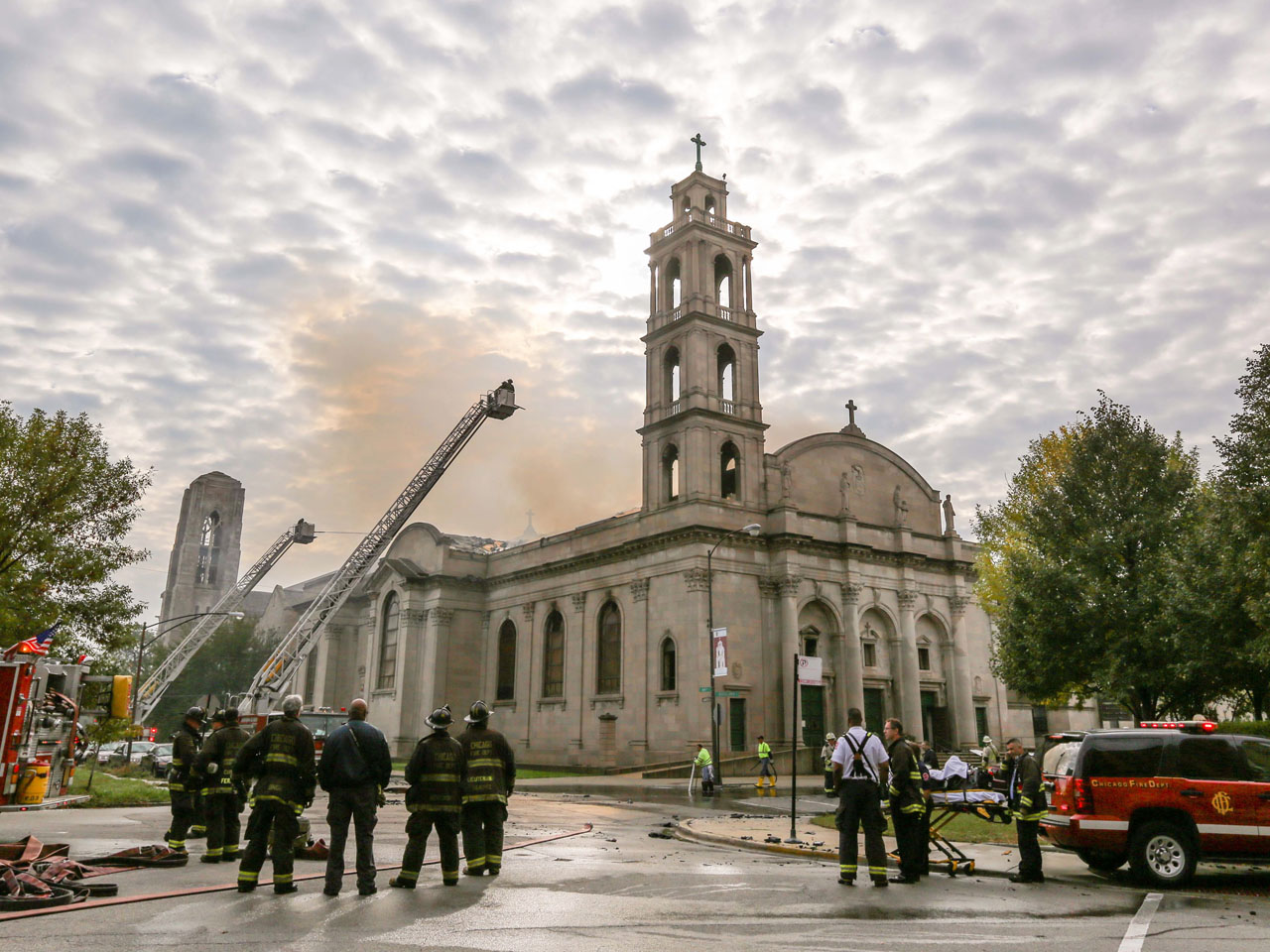 CHICAGO -- An extra-alarm fire ravaged a nearly century-old landmark church in Chicago on Wednesday, causing the roof to collapse, and sending gray water streaming out the front door hours after firefighters began dousing the heavy flames.

The Fire Department first responded to the fire at Shrine of Christ The King Sovereign Priest shortly before 6 a.m., when smoke alarms went off in the neighboring priory, reports CBS Chicago. Fire officials said the fire might have burned all night, after floor varnishing work was done in the choir loft.

"Realistically, whenever that fire started, it went unnoticed for a long period of time. That smoke could have traveled within the structure, where it didn't come out until a window failed," said Deputy Fire Commissioner John McNicholas. "Unfortunately, most of the roof collapsed into the structure. So as beautiful as the structure is, it sustained an awful lot of damage."

When the first firefighters arrived at the scene, they saw fire through a couple of windows of the church, and once they got inside, they found "an awful lot of fire within the church itself," according to McNicholas.

Firefighters were pulled out of the building, and a defensive operation was set up to prevent the blaze from spreading to any neighboring buildings.

A total of about 150 firefighters and 50 pieces of fire equipment were used in the response.

Statues of saints along the roof looked down through the flames as a handful of seminarians, brothers, and priests knelt outside the church in their pajamas and prayed as the fire burned.

"We've got people out in front that are praying for the fire department to be able to successfully save their church," Fire Department spokesman Larry Langford said.

The fire caused extensive damage to the roof, which eventually collapsed. The interior of the building was expected to be a total loss, and fire officials were concerned the steeple might collapse as well.

Parishioner Nicole Raciunas, a mother of eight, cried after seeing the devastation at the church. She was on her way to morning Mass when she learned about the blaze.

"It's worse than I imagined. I was hoping it would just have been something small," she said. "It's just a building, but it's our home; but ultimately, yeah, the church is the people, not the building, so something better will come out of it, I'm sure. God wouldn't have allowed it, right?"

No injuries have been reported, but a shelter for women and children next door was evacuated as a precaution. Approximately 60 people who were staying at the shelter have been relocated.

The Fire Department Office of Fire Investigations and the Police Bomb & Arson Unit were investigating the cause of the blaze, but officials said it appeared to be accidental.

McNicholas said church members were varnishing floors Tuesday night, and that work might have had something to do with the blaze. The church had been undergoing a multi-million dollar renovation for years before the fire started.

Officials with the city's Buildings Department will visit the scene to assess the damage, and determine if any of the church remains structurally sound.

According to city records, the church was issued a permit to remove and replace the roof in 2014. A year earlier, the city reinstated a 2010 permit for mechanical, electrical, plumbing, fire protection, bathroom construction, and accessibility upgrades.

Roman Catholic Archdiocese of Chicago spokeswoman Susan Burritt said the church is not part of the Archdiocese, but is run by the Institute of Christ the King Sovereign Priest.

Designed in the Renaissance Revival style, with massive Corinthian columns, the St. Gelasius Church building was built in 1923, designed by architect Henry J. Schlacks, who designed several other churches in Chicago and the suburbs, and taught the first formal courses in architecture at the University of Notre Dame in the 1890s.

Alderman Willie Cochran said the goal of 12-year renovation plan was to make the church a world-class attraction.

"Monsignor [Michael] Schmitz has been charged by the Vatican to come here and restore this church," Cochran said "Supporters in the church and the funders have put several million dollars into this building so far, and there were more to come."

Cochran said he planned to speak to the community to find a way to move forward with a new renovation plan.