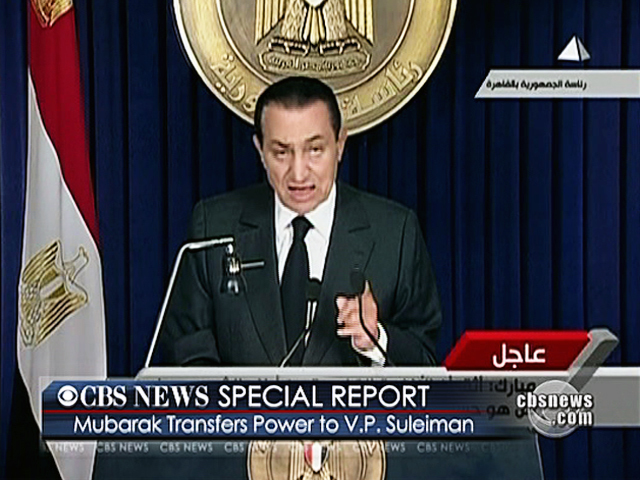 Egyptian President Hosni Mubarak has temporarily left Cairo, a day after transferring some power to Vice President Omar Suleiman in an effort to quell weeks of protests, CBS News has confirmed.

The embattled ruler left the capital for the Red Sea resort city of Sharm el-Sheikh. He is not expected to stay there indefinitely but will return to Cairo. Reports that he has fled the country for a safe haven elsewhere in the Arab world - or for medical care in Europe - are inaccurate, sources told CBS News.

Mubarak reportedly left during or immediately after his speech to the nation last night, which was taped in advance. Anger has flared on the Egyptian streets following the speech.

Mubarak was widely expected to announce he was stepping down Thursday. Instead he said he would transfer some unspecified powers to Vice President Omar Suleiman and remain president until elections in September. As Mubarak's speech was broadcast, premature victory celebrations among protesters in central Tahrir Square turned to bafflement, dismay, and rage.

Mubarak's concessions seem like a half-measure - at best - to demonstrators who want nothing less than his complete removal from power. Even the installation of Suleiman is distasteful to many. Suleiman is seen in Egypt and abroad as an establishment figure and close ally not fundamentally different from Mubarak.

The Egyptian military on Friday endorsed Mubarak's plan to stay in office Friday while protesters fanned out to the presidential palace in Cairo and other key symbols of the authoritarian regime in a new push to force the leader to step down immediately.

The statement by the Armed Forces Supreme Council -- its second in two days -- was a blow to many protesters who had called on the military to take action to push out Mubarak after his latest refusal to step down.

But soldiers also took no action to stop demonstrators from massing outside the palace and the headquarters of state television, indicating they were trying to avoid another outbreak of violence.

Anti-government protesters said they were more determined than ever as the uprising entered its 18th day.

CBS News correspondent Terry McCarthy reported that "some of the biggest crowds Cairo has ever seen" were gathering in Tahrir Square, the focal point for the nearly three-week protest movement.

In nearby Heliopolis, CBS News' Amjad Tadros saw hundreds of protesters around the presidential palace. The palace was protected by four tanks and rolls of barbed wire, but soldiers were doing nothing to stop demonstrators from joining the rally and chanting anti-Mubarak slogans.

There were, however, several reports from Arab networks that clashes had broken out between anti-government protesters and Mubarak supporters.

The military also promised that the hated emergency laws, in force since Egypt's authoritarian ruler came to office in 1981, would be lifted and gave a somewhat more specific timeframe than Mubarak had offered in his Thursday night speech.

But CBS News national security correspondent David Martin reports, however, that the powerful military's unwillingness to act decisively against Mubarak on Thursday spoke for itself.